WASHINGTON, D.C. -- Gallup's U.S. Job Creation Index averaged +32 in October, the sixth month in a row in which the index has held at this level. This is the highest index score since Gallup began measuring employees' perceptions of job creation at their workplaces in 2008. When Gallup began measuring job creation in January 2008, the index measured a healthy +26. But it quickly fell, including substantial drops in the fourth quarter of 2008 after the start of the financial crisis. The index hit a nadir of -5 in early 2009, and has slowly rebounded since.

Gallup's Job Creation Index is based on interviews conducted Oct. 1-31 with more than 18,000 American adults who are employed either full or part time as part of Gallup Daily tracking. Gallup asks employed workers nationwide each day whether their employer is increasing, reducing or maintaining the size of its workforce. No regions had significant changes in perceptions of hiring in October compared with September. Net hiring continues to be lowest in the East, at +28, as has generally been the case since 2013. Hiring perceptions were similar in the Midwest (+34), South (+33) and West (+33). Although steady between September and October, hiring in the Midwest has dropped from +36 in August, which tied the highest score recorded for any region since Gallup began tracking this metric. While job creation remains at its current high, the question of how high the index can be expected to go remains unanswered. Gallup's Job Creation Index began in 2008, which means there is not a comparison for robust economic periods such as the dot-com boom in the late 1990s. With less than half of workers reporting that their companies are hiring, it initially would seem plausible that hiring could increase in the future. The size of a small business's workforce is fairly consistent, however, and can't be expected to change frequently, and the majority of workers are employed by small businesses.

The current +32 index comes at a time when unemployment remains low, with the Bureau of Labor Statistics reporting 5.1% unemployment. This is not as good as the rates near 4.0% in 1999 and 2000, but it is one of the better rates in recent times. Even looking at the states with the highest rates of job creation -- such as North Dakota -- their indexes in 2014 were only slightly higher than the current score for the country as a whole. One future driver of expanded job creation could be more entrepreneurial activity and new business startups, as the number of new businesses being started recently is less than the number that are closing, according to the Brookings Institute. All in all, it is a positive sign that job creation continues at this high point, but it does invite speculation about just how much higher the index can climb.

Results for this Gallup poll are based on telephone interviews conducted Oct. 1-31, 2015, on the Gallup Daily tracking survey, with a random sample of 18,207 aged 18 and older, who are employed full or part time, living in all 50 U.S. states and the District of Columbia. For results based on the total sample of national adults, the margin of sampling error is ±1 percentage points at the 95% confidence level. All reported margins of sampling error include computed design effects for weighting. 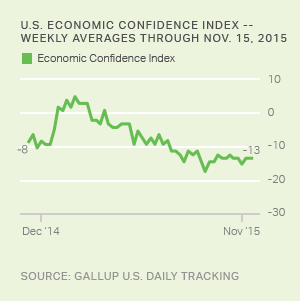 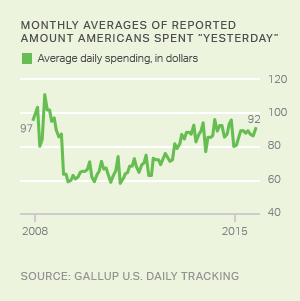