Americans' perceptions of the job market's health in 2015 and 2016 show significant improvement compared with their views of it from 2008 to 2013. During that period, the percentage saying it was a good time to find a quality job dipped as low as 8%. Views of job seekers' prospects improved steadily from 2012 to 2014, and have hovered near 40% since.

The latest decrease in the percentage saying it is a good time to find a quality job is within the margin of error for the poll, and comes despite Americans' continuing highs in perceptions of hiring at their place of employment.

It's possible that even as employed Americans see improved hiring situations where they work, Americans as a whole have acquired a slightly more tainted view of the overall job market after taking in the convention rhetoric. Speakers at the Republican convention criticized the job market under Democratic President Barack Obama. And even while praising Obama, speakers at the Democratic convention may have left the impression that the best days are yet to come in terms of job creation.

Both Democrats' and Republicans' views of the job market have taken a hit this month. While nearly a third of Republicans said in July that it was a good time to find a quality job, this number has soured by nine percentage points to 23% in August. Democrats, at 51% this month, have seen a similar drop of eight points. Independents' views are largely unchanged.

Americans who approve of Obama's job performance, as well as those who disapprove of it, are slightly less optimistic about the job market in August than they were last month.

Perceptions of the job market's health may not be at their most optimistic, but they are within the range of where they've been for over a year and a half -- and are much brighter than the post-recession lows.

Despite Friday's strong jobs report from the U.S. Bureau of Labor Statistics, Americans' assessment of the job market has slipped by four points this month, indicating that their views are not always in sync with actual figures on job growth. But if reports continue to show solid job creation, optimism for the job market could eventually catch up. 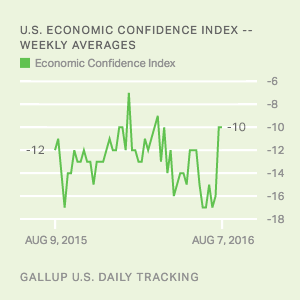 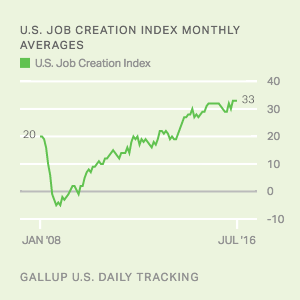