WASHINGTON, D.C. -- The Gallup Good Jobs (GGJ) rate in the U.S. was 45.6% in September. This is down from the 46.5% measured in August but still higher than any other September rate Gallup has recorded since it began tracking this measurement in 2010. GGJ typically peaks in June and July with summer employment and falls through autumn, so the decline from the record 47.1% in July is in line with typical seasonal patterns. The GGJ metric tracks the percentage of U.S. adults, aged 18 and older, who work for an employer full time -- at least 30 hours per week. Gallup does not count adults who are self-employed, work fewer than 30 hours per week, are unemployed or are out of the workforce as payroll-employed in the GGJ metric. The Gallup Good Jobs metric does not take into account factors such as job satisfaction or salary level, and solely reflects full-time employment for an employer. The latest results are based on Gallup Daily tracking interviews with 29,458 U.S. adults, conducted Sept. 1-30 by landline telephone and cellphone. GGJ is not seasonally adjusted.

Workforce Participation Steady at 67.5% in September

The percentage of U.S. adults in September who participated in the workforce in any capacity -- by working full time, working part time, or not working but actively seeking and being available for work -- was 67.5%, essentially the same as 67.4% in August.

Gallup's unadjusted U.S. unemployment rate in September was 5.4%, steady with August. However, this month's rate is almost a full point below the 6.3% recorded in September 2015, reflecting the better employment situation now compared with a year ago. Gallup's U.S. unemployment rate represents the percentage of adults in the workforce who did not have any paid work in the past seven days, either for an employer or for themselves, and who were actively looking for and available to work. Unlike the Gallup Good Jobs rate, which is a percentage of the total population, the unemployment rates that Gallup and the U.S. Bureau of Labor Statistics (BLS) report are percentages of the labor force, defined as those who are working or seeking work. While both Gallup and BLS data are based on surveys with large sample sizes, the two have important methodological differences -- outlined at the end of this article. Additionally, the most-discussed unemployment rate released by the BLS each month is seasonally adjusted, while Gallup reports unadjusted numbers. Although Gallup's unemployment numbers strongly correlate with BLS rates, the BLS and Gallup estimates of unemployment do not always track precisely on a monthly basis.

Gallup's measure of underemployment in September was 12.9%, down nominally from 13.2% in August and the second-lowest Gallup has recorded to date. Gallup recorded the low of 12.7% for underemployment in July 2016. Gallup's U.S. underemployment rate combines the percentage of adults in the workforce who are unemployed (5.4%) with those who are working part time but desire full-time work (7.5%). Underemployment was roughly 20% when Gallup started measuring it in January 2010. Results for this Gallup poll are based on telephone interviews conducted Sept. 1-30, 2016, on the Gallup Daily tracking survey, with a random sample of 29,458 adults, aged 18 and older, living in all 50 U.S. states and the District of Columbia. For results based on the total sample of national adults, the margin of sampling error is ±1 percentage point at the 95% confidence level. All reported margins of sampling error include computed design effects for weighting. 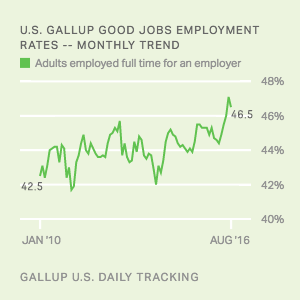