skip to main content
Wellbeing
Four in 10 in U.S. Dissatisfied With Their Healthcare Costs

PRINCETON, N.J. -- Even as the majority of Americans applaud the quality, cost and coverage of their healthcare, four in 10 adults -- a conspicuous minority in the era of the Affordable Care Act -- are dissatisfied with their healthcare costs. Americans who are covered by Medicare or Medicaid are the least dissatisfied (29%), while dissatisfaction is highest among the uninsured (62%) and averages 48% among those with private insurance.

These figures are based on combined data from Gallup's 2014, 2015 and 2016 Health and Healthcare polls, conducted each November. Across this period, coinciding with the implementation of the individual mandate component of the Affordable Care Act (ACA), an average 42% of U.S. adults report being dissatisfied with their healthcare costs. That is up from 38% on average from 2011-2013, although similar to satisfaction levels a decade ago. Just over a third of Americans in Gallup's 2014-2016 healthcare polling (37%) report being enrolled in a government healthcare plan such as Medicaid or Medicare; 52% get their healthcare through private insurance; and 11% have no insurance. Which Privately Insured Americans Are Most Cost-Sensitive?

Among those whose employer pays the full amount, just 27% are dissatisfied. This rises to 46% among those who share premium costs with their employer and to 60% who pay the full costs themselves.

Helping explain their heightened dissatisfaction with healthcare costs since 2011-2013, adults with private health insurance are now more likely to be paying the full cost of their premiums than they were in that earlier period, 28% vs. 21%. This likely reflects the addition of new enrollees under the ACA's individual mandate, as well as workers moving off of an employer-sponsored plan -- in some cases after being dropped -- and into the ACA exchanges.

Cost increases also appear irksome to healthcare consumers because the percentage of Americans who are dissatisfied is directly related to the extent to which their healthcare premiums went up in the prior year.

Consumers' dissatisfaction with healthcare costs is more than a mindset -- it is rooted in difficult decisions. Fifty percent of those who are dissatisfied with what they pay say that they or a family member put off medical treatment in the past year because of the cost. This includes 32% who say the delay was related to a serious medical condition. By contrast, among those who are satisfied with their costs, 18% put off a medical treatment of any kind, including 11% for whom it was a serious condition.

While it may be hard for average consumers to be "satisfied" with the price of anything that can cost them thousands of dollars, dissatisfaction with healthcare costs depends a lot on the type of coverage a person has. Medicare recipients enjoy fairly broad coverage with relatively low health insurance premiums unless they opt for supplemental insurance. The uninsured pay no monthly premiums but have the burden of paying all of their medical bills. Privately insured adults are largely satisfied with their benefits, but also bear a lot of the costs. Their growing dissatisfaction with those costs likely reflects the squeeze from all sides: reduced employer health insurance benefits, rising health insurance premiums and rising deductibles at a time when medical costs are outpacing inflation.

The Affordable Care Act has made health insurance available to millions of Americans who previously had no insurance and provides subsidies for those least able to pay on their own. The program's provisions requiring insurance companies to cover pre-existing conditions also likely contribute to Americans' continued high satisfaction with the level of coverage they receive. However, healthcare costs remain a vexing problem for the system as a whole, as well as for individual Americans.

The 2014-2016 results reported here are based on combined results from Gallup's 2014, 2015 and 2016 Health and Healthcare surveys. The surveys were conducted by telephone each November with a random sample of at least 800 adults, aged 18 and older, living in all 50 U.S. states and the District of Columbia. For results based on the combined sample of 2,868 national adults, the margin of sampling error is ±2 percentage points at the 95% confidence level. 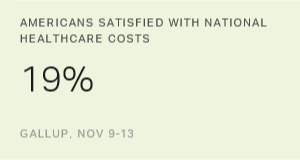 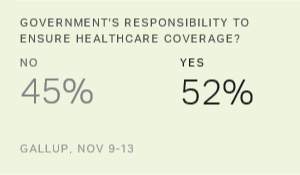 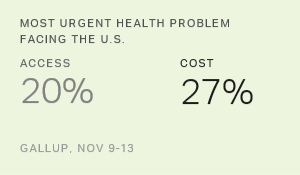