skip to main content
World
Mixed Reaction in Asia on Whether U.S. Would Defend Them

WASHINGTON, D.C. -- Months before Donald Trump's election and the potential shake-up in U.S. policy toward Asia that's currently in the headlines, residents across Asia had mixed views about whether the U.S. would defend them if they were involved in a military conflict. Solid majorities in longtime allies Australia, the Philippines, South Korea and New Zealand believed the U.S. would defend them, while sizable numbers in other allies such as Japan and Thailand were far less sure.

Residents in most countries and territories that do not have a defense agreement or some type of understanding with the U.S. are not confident that the U.S. would come to their aid. This includes majorities in Hong Kong, China and Pakistan who believe the U.S. would not defend them.

Modest Numbers in Japan and Taiwan

The U.S.-Japan Security Alliance states that the U.S. will have military bases in Japan in exchange for U.S. defense of Japan if it were attacked. Despite that agreement, slightly more than half of Japanese (53%) say the U.S. would defend them if Japan became engaged in a military conflict. Recent Japanese military developments could be influencing the country's views. A condition for post-World War II Japan was that it could not use its military outside its own country, but in 2015, that changed when Japan amended its constitution to allow it to use its armed forces outside its border for the first time in 70 years. Fewer than four in 10 Japanese (39%) say it is good that Japan can use its military to help defend another country. Japanese neighbors aren't supportive of Japan's new military authority, as 13% of Chinese and 17% of South Koreans say it's a good idea.

Forty-four percent of Taiwanese say the U.S. would provide military assistance if needed. While the U.S. does not officially recognize Taiwan, Congress passed the Taiwan Relations Act in 1979, which states the U.S. can defend Taiwan. This geopolitical relationship was highlighted recently when U.S. President-elect Donald Trump accepted a phone call from Taiwan's president -- something no U.S. president or president-elect has done since the U.S. established relations with China in 1979. Forty-eight percent of the Taiwanese approve of U.S. leadership, while 36% approve of Chinese leadership.

Filipinos' Positive View of U.S. Differs From Their President's

The Philippines' new leader, President Rodrigo Duterte, departed significantly from the rest of his country's opinion when he publicly denounced the leadership of the U.S. and signaled his alignment with China. The majority of Filipinos approve of U.S. leadership (71%), while 20% approve of China's leadership.

More than three in four Filipinos (78%) believe the U.S. would defend them in a military conflict, on par with views in Australia (79%). However, since this survey was conducted, Duterte has stated that he wants U.S. troops out of the country in two years.

Pakistan and Hong Kong Not Confident in U.S. Military Assistance

Despite a large amount of U.S. aid and a long-standing strategic relationship, 6% of Pakistanis think the U.S. would defend them. This likely reflects the frequent U.S. incursions into Pakistani territory while pursuing the Taliban and terrorists, as well as the U.S.'s warm relationship with India.

Hong Kong residents are as likely as Pakistanis to believe the U.S. will not defend them (83%). As part of the "one country, two systems" agreement, Hong Kong has been part of China since 1997. In recent years, Hong Kong's relationship with Beijing has been somewhat tenuous, as some residents have demanded free elections. Despite sharing English as a language and respecting democracy, Hong Kong does not see the U.S. as a reliable ally in its struggle for increased autonomy.

Trump's demonstrated willingness to break from traditional diplomatic norms will inevitably alter Asian countries' perspectives on the credibility of the United States' threat of force -- though it is currently unclear how. Changes in U.S. administrations can significantly alter global views of the U.S. After Barack Obama was elected in 2008, worldwide approval of U.S. leadership jumped to 49%, up from 34% under George W. Bush. It remains to be seen how Trump's victory will affect the U.S. image and geopolitical decision-making, but it could introduce a large degree of uncertainty into the United States' willingness to send troops or other military assistance abroad.

Results are based on interviews conducted from March 2016 to July 2016 across Asia with nationally representative samples of 1,000 to 4,373 adults, aged 15 and older. For results based on these national samples of adults, the margin of sampling errors are ±4.5 percentage points or less, at the 95% confidence level. 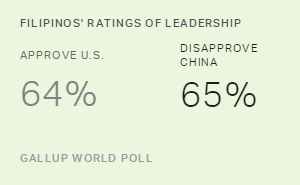 As tensions mount between China and the Philippines over the South China Sea, Filipinos' disapproval of Chinese leadership is twice as high as it was before the situation started to flare up in 2011.

Most Americans and U.S. opinion leaders say a strong relationship between China and the U.S. is a good thing. However, a majority of both groups also say China's growing influence in the world is bad for the U.S.