WASHINGTON, D.C. -- Out of all the states, residents of Massachusetts were the most positive about the U.S. economy in 2016, scoring an average +2 on Gallup's Economic Confidence Index. Other states with slightly positive scores were California, Hawaii, Maryland and Washington -- all averaging +1 for the year.

Other states with above-average scores include Minnesota (-1), Rhode Island (-4), Colorado (-5) and Virginia (-5). The District of Columbia, not included in the state rankings, has had positive scores since 2012, including +30 in 2016. West Virginia's index score of -38 is its best in years, but the state remains the least economically confident, as it has each year since 2010. Other low-ranking states are Wyoming (-33), Oklahoma (-32) and Mississippi (-28).

Texas and North Dakota, both oil industry-dependent states, led the U.S. in economic confidence since 2008 as the U.S. energy sector thrived. Both states' rankings dropped in 2016 as they struggled with a major decline in oil prices. In Texas, U.S. economic confidence dropped by seven points in 2016 to -9, while in North Dakota it fell by 15 points -- the most of any state -- to -16. Wyoming, another oil-dependent state, ranked among the bottom 10 states last year at -22, but its index score dropped the second-most among all states in 2016, falling 11 points to -33.

While Americans' confidence in the U.S. economy in 2016 was just slightly lower than confidence in 2015, residents in many states showed a more significant change in how they viewed the economy.

In a few states, particularly states that are heavily dependent on oil, such as North Dakota, Wyoming and Texas, confidence took a major hit in 2016. Meanwhile, the same states languish toward the bottom of the list.

Americans' economic confidence in 2017 began on a high note, averaging +7 or higher each week thus far in January, continuing the surge first observed after the 2016 presidential election. If this trend continues, it will likely be reflected in many of the states' scores, but not necessarily all of them. Some industry-reliant states, such as the industrial Midwest, may experience a boost in confidence if the economic initiatives of the new presidential administration are successful, which could affect the coming year's rankings.

Results for this Gallup poll are based on 177,192 telephone interviews conducted Jan. 1-Dec. 31, 2016, All reported margins of sampling error include computed design effects for weighting. 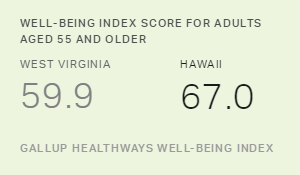 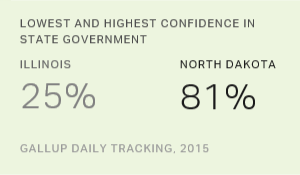