WASHINGTON, D.C. -- For the third year in a row, Washington, D.C., ranked first among the nation's 50 largest metro areas in the 2016 Gallup Good Jobs ratings -- a measure of full-time employment for an employer. But 2017 may bring new challenges to the workplace dynamics of the nation's capital if President Donald Trump and Republican congressional leaders carry out plans to drastically cut the federal workforce.

State capitals with strong technology hubs once again filled the top slots after Washington, D.C. All of the top-six metro areas on the list include state capitals (or the nation's capital), and all have been in the top 10 rankings since Gallup began comparing the 50 most populous U.S. metros in 2014. All also have a strong technology presence within their metro area.

In addition to the top six, other metros with well-established technology hubs generally did well in the rankings; Seattle; San Jose, California; and Boston all made it into the top 20. State capitals also tended to fare well in this broader group. Sixteen of the 50 largest metros are state capitals -- of these, 10 ranked in the top 20, and only three were in the bottom 20.

Complete data for each of the 50 largest metro areas appear at the end of this article.

The Gallup Good Jobs (GGJ) metric tracks the percentage of U.S. adults, aged 18 and older, who work for an employer full time -- at least 30 hours per week. Gallup does not count adults who are self-employed, who work fewer than 30 hours per week, who are unemployed or who are out of the workforce. GGJ does not take into account factors such as job satisfaction or salary level, and solely reflects full-time employment for an employer. The rate is not seasonally adjusted.

The top ranking for Washington, D.C., is the result of several factors. Because the Gallup Good Jobs rate is designed to highlight places with a high percentage of jobs available to someone seeking full-time work, it does not include those who are self-employed, part-time workers or those out of the workforce (students, retirees, stay-at-home parents, etc.). The D.C. area ranks low in all of the aforementioned categories:

A heavy concentration of federal workers and those whose jobs are closely connected to the federal government allowed the D.C. area to weather the 2008-2009 economic crash better than most areas. But Trump and Republican leaders in Congress are pushing for major reductions in the federal workforce. Budget resolutions last year in the GOP-controlled Congress called for major cutbacks, including a formula that limits agencies to one new employee for every three who leave. Meanwhile, one of Trump's first actions after taking office was to issue a sweeping freeze on new federal hires. Those cutbacks, however, could be offset by increases in non-governmental jobs, including lobbyists, consultants and jobs tied to increases in spending for the military.

Two metros at opposite ends of the rankings were hit with the largest losses -- 47th-ranked Las Vegas and fifth-ranked Raleigh, North Carolina. Raleigh's lost ground comes a year after it had made even larger gains. In the case of Las Vegas, other polling provides some evidence that the situation may be improving soon. Gallup's Job Creation Index, which measures new hiring activity, showed Las Vegas making large gains over the last two years, perhaps presaging a boost this year in the percentage of those employed full time for an employer.

Several other Sun Belt metros joined Las Vegas at the bottom of the rankings, including three from Florida -- Tampa, Miami and Orlando -- and three from California -- Los Angeles, Sacramento and Riverside. Bottom-ranked Tampa, the only metro with a Gallup Good Jobs rate below 40%, has the largest percentage of residents not in the workforce. A major factor: The 2013 study of seniors in major metro areas listed Tampa as having the highest percentage (18.4%) of its population aged 65 and older.

The past year had its share of positive economic news for the United States, including a rising stock market, low unemployment and a boost to Gallup's Job Creation Index. Among the bright spots has been the increase in the labor force participation rate, which had been in steady decline for more than a decade.

The Gallup Good Jobs rate for 2016 reflected this labor force increase, with many of the nation's largest cities and surrounding areas showing solid gains. As has been the case for the past few years, metros with a solid, stable base of jobs -- whether from a traditionally secure form of employment (government work) or the new century's growth industry (technological work) -- have led the way in providing employment for a large swath of their area's population.

Results for this Gallup poll are based on telephone interviews conducted in 2016 on the Gallup U.S. Daily survey with a random sample of 354,980 adults, aged 18 and older, living in all 50 U.S. states and the District of Columbia. For results based on the total sample of working adults, the margin of sampling error is ±1 percentage point at the 95% confidence level. For results based on metro area-level data, the margin of sampling error is no more than ±4 percentage points at the 95% confidence level and is ±3 percentage points for most metro areas. Metropolitan areas are defined using Office of Management and Budget (OMB) definitions for metropolitan statistical areas (MSAs). 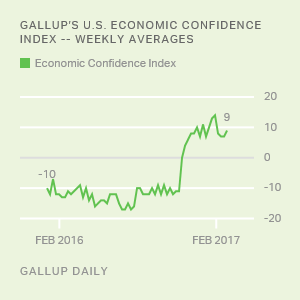 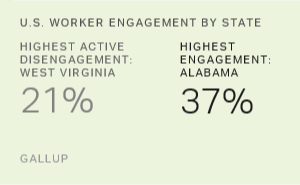 One in three U.S. employees are engaged at work. Alabama has the highest percentage of engaged workers, at 37%, followed closely by Delaware, Kentucky and Louisiana, at 36%. 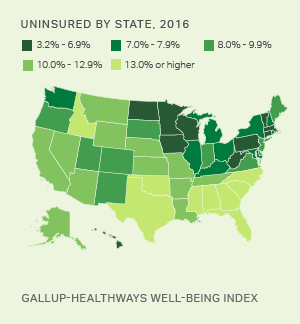