These results are from Gallup's 2017 Environment poll, conducted March 1-5.

Democrats' assessment of the environment as excellent or good is relatively unchanged in the most recent poll. Democrats have traditionally been less positive about the environment than Republicans have, and the current 27-point difference between the two groups is the highest since 2009. Still, Democrats' rating of the environment remains more positive than it was during most years of the Bush administration.

Republicans are also more optimistic than Democrats when asked about the future of the environment, with 53% saying it is getting better rather than getting worse, compared with 22% of Democrats. This marks a substantial change from a year ago, when the groups were essentially even, as they were throughout most of the Obama administration. There was a significant partisan gap on this item for much of the Bush administration.

Republican optimism about where the environment is headed has surged 16 points in the past year and is now at its highest level since 2004. On the other hand, the percentage of Democrats saying the environment is getting better has fallen, from 40% in 2016 to 22% in 2017. The change in occupancy of the White House in 2009 did not have quite the same effect on partisan views of the environment. Unlike the Republican surge today, there was virtually no change between 2008 and 2009 in Democrats' perceptions about the quality of the environment after Obama took office. The percentage of Republicans rating the environment as excellent or good fell 10 points, from 65% in 2008 to 55% in 2009.

While there have been substantial shifts in environmental ratings among political groups, these have mostly canceled each other out in the overall numbers for the U.S., resulting in little perceptible change among Americans as a whole. Forty-six percent of Americans say the environment is currently excellent or good. This represents a modest decline from 50% in 2015, the high point in Gallup's trend. Americans typically have had negative views on the quality of the environment since Gallup began asking them to rate it. The only year in which the percentage saying the environment was excellent or good (50%) effectively equaled that saying it was fair or poor (49%) was 2015.

Americans' outlook for the environment has also remained the same overall since 2009, despite the significant partisan shifts on this measure. Thirty-six percent of Americans say the environment is getting better, matching views in 2016. Positive sentiments on the future of the environment had jumped after Obama's election, from 26% in 2008 to 41% in 2009. So far, there has not been a corresponding dramatic shift since Trump's election. 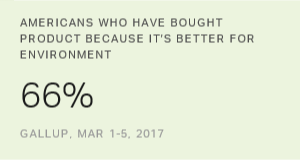 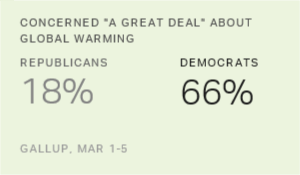