WASHINGTON, D.C. -- People's desire to migrate permanently to other countries rebounded slightly between 2013 and 2016, but Gallup's Potential Net Migration Index (PNMI) shows adult populations would continue to grow only in Northern America, Europe (European Union and non-EU countries), and Australia, New Zealand and Oceania if everyone who wanted to move actually moved to where they wanted. At the same time, populations in sub-Saharan Africa, Latin America and the Caribbean, the Middle East and North Africa, and Asia would wither.

Gallup's PNMI is the estimated number of adults who say they would like to move permanently out of a country if the opportunity arose subtracted from the estimated number who say they would like to move into it, as a proportion of the total adult population. The higher the resulting positive PNMI score, the larger the potential net adult population gains. The latest results include 156 countries or areas surveyed between 2013 and 2016 and are based on nearly 590,000 interviews. PNMI scores for 2010 to 2012 are based on surveys in 154 countries and areas and interviews with nearly 520,000 adults.

For the most part, not much has changed at the regional level since Gallup last calculated its PNMI scores. Scores fell significantly in only two regions, Latin America and the Middle East and North Africa (MENA). The decline in MENA is particularly worth noting because the score went from positive to negative for the first time -- meaning the region would experience a net loss of adults.

However, it is important to look beyond these broad, regional patterns and look at scores at the country level because they don't always mimic the region as a whole. For example, while sub-Saharan Africa overall scores a -25 PNMI, scores range from a +40 in Botswana to a -62 in Sierra Leone. And in non-EU countries in Europe, scores ranged from +173 in Switzerland (also the highest PNMI score in Europe) to -39 in Albania.

At the same time, some countries follow the same patterns as their region as a whole. In former Soviet states, for example, not one country posted a positive PNMI score. This is not to say that the situation has not improved in some countries. Russia's score in 2010 to 2012 was -9, and it improved significantly to -4 in the most recent analysis period. The percentage of Russians who want to leave their country has been much lower in the past several years than it has been for most of the past decade -- possibly reflecting a surge in patriotism after Crimea joined Russia in 2014.

Within the European Union, PNMI scores increased significantly only for Germany. The increase from +23 in the previous period to +41 in the current one coincides with the massive influx of migrants and refugees into the country beginning in 2015 and the growth in the country as a desired destination among potential migrants.

Elsewhere in the European Union, as the United Kingdom became a less desirable destination for potential migrants, it saw its PNMI score drop significantly from +53 to +39. Italy's score dropped from +10 to -3 (the first time it has had a negative score), Poland's dropped from -14 to -19 and Cyprus' score declined from +71 to -5. Notably, in Greece, which has been the entry point to Europe for many migrants, there has been no change in its typically negative scores.

The PNMI scores for Latin America as a whole worsened in the most recent analysis period, dipping lower to -17. Changes in populous countries such as Venezuela, which has teetered on the edge of economic and political collapse since 2013, are largely behind the sinking scores in the region. The country's PNMI dropped from -9 between 2010 and 2012 to -20 between 2013 and 2016. Negative scores in Brazil and Mexico nearly doubled, likely reflecting the political and economic turmoil in those countries.

In the 2013 to 2016 period, PNMI scores for the Middle East and North Africa region as a whole dipped into negative territory for the first time, dropping to -3. While scores in Gulf Cooperation Council countries continued to be positive and high, significantly lower index scores in conflict-ravaged Syria (-42), Iraq (-24) and Libya (-10) contributed to the lower score for the region. Morocco's score improved since the previous period. While Yemen also showed some improvement, it scores among the lowest in the region.

While Gallup's PNMI does not predict migration patterns, it does provide useful information about whom these countries are attracting around the world and the areas where they need to work to ensure they retain the talent already at home.

People's desire to migrate showed signs of rebounding after bowing slightly in the wake of the Great Recession, but some countries, such as the United Kingdom, while remaining highly desired destinations, have lost some of their allure in that same period. While it has declined significantly, the U.K.'s positive PNMI score suggests the adult population would still grow through migration. Others, such as Germany, are even more desirable and would see larger influxes. The situation presents a double-edged sword for the United Kingdom, Germany and a host of other countries where native workers are aging faster than they are being born.

The PNMI is measured on a scale of -100 (meaning the total adult population of the country would leave) to infinity (meaning the potential inflow of adult population to the country is unlimited and depending on the number of adults who want to move in from around the world). As with any survey-based estimate, the PNMI has a corresponding margin of error for each country, calculated using the standard error of the index. Sample size, size of the country and range in population projection weights affect the PNMI margin of error. 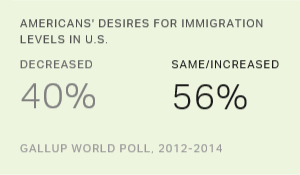