These findings are among those featured in the International Organization for Migration's recent report, How the World Views Migration, which is based on Gallup World Poll interviews with more than 183,000 adults across 142 countries between 2012 and 2014. Gallup correlated public opinion on immigration with government policies (as defined in the UN International Migration Policies report) in 136 of the 142 countries. For the purpose of the analysis, 76 countries had policies aimed at maintaining current immigration levels, 26 had policies to lower them, 19 had policies to raise levels, 15 had policies of no intervention and six did not have any policy information available.

Residents in countries with policies to "maintain" or "raise" immigration are more positive than residents in countries where policies fall into the two other groups. Notably, this relationship holds for all major world regions except Europe, where public opinion is heavily weighted toward decreasing immigration. While the bulk of these surveys took place between 2012 and 2013 -- well before Europe was dealing with one of its worst migrant crises since World War II -- these data do provide a baseline for attitudes before the situation reached a critical point. In top international migrant destination countries in Europe, policies are mixed. In several countries that have policies to lower immigration, public opinion tilts negative, with sizable percentages of adults saying that immigration levels should decrease (from 44% in France to 69% in the United Kingdom) and few saying levels should increase (5% to 6%). In Germany, which has a policy to maintain levels, nearly half of residents (49%) say immigration should be kept at present levels, and another 14% say it should be increased. In Saudi Arabia and the United Arab Emirates, where the proportion of international migrants in the total population is among the highest in the world, the prevalent government policy in 2011 was aimed at lowering immigration. Both countries support policies to attract highly skilled workers, and the United Arab Emirates has a policy for maintaining immigration levels for temporary workers, but few other pro-immigration policies are in place. In contrast with these policies, majorities in both countries believe immigration should stay at current levels or increase.

In Russia, residents' negative attitudes toward immigration (70% desire lower levels) run directly counter to the country's immigration policies, which, as of 2011, were almost all pro-immigration. The overall migration policy objective of Russia was to raise immigration levels, including those for highly skilled workers, temporary workers and the number of immigrants who become permanent residents. The country also had pro-immigrant policies for integration and naturalization.

Overall, the data show a strong connection between government immigration policy and public opinion. Whether people are generally modeling their attitudes toward migration levels after existing national immigration policies or whether such policies, rather, reflect the public will is difficult to establish. It may also be a combination of both.

Regardless, the results also reveal that negative and positive opinions toward immigration exist in every region and every country. This illustrates the challenges that governments are facing now as they attempt to deal with an ongoing migrant and refugee crisis, and create cohesive migration policies that align with their countries' needs and the public's desires.

Anita Pugliese contributed to this article.

With some exceptions, all country samples are probability based and nationally representative of the resident population aged 15 and older. The coverage area is the entire country including rural areas, and the sampling frame represents the entire civilian, non-institutionalized, aged 15 and older population of the country. Exceptions include areas where the safety of interviewing staff is threatened, scarcely populated islands in some countries and areas that interviewers can reach only by foot, animal or small boat. In Gulf Cooperation Council countries, at the time of data collection, Gallup was able to interview only nationals and Arab expatriates. 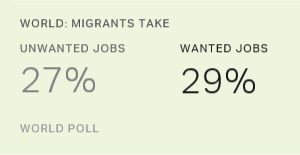 World Split on Whether Immigrants Take Jobs Away