Since Gallup first began tracking this measure in 2010, the GGJ rate has always risen between May and June. The current increase of nearly a full percentage point is higher than the average increase of 0.6 points from May to June.

While the June 2017 GGJ rate falls short of the high point of 47.1% that Gallup recorded in July 2016, it is two points above the average for the rate since its inception in 2010 -- 44.3%. It is also nearly five points higher than the low point of 41.7%, recorded in February 2011 as the U.S. economy was still recovering from the Great Recession.

The GGJ rate is the percentage of U.S. adults, aged 18 or older, who are employed on a full-time basis -- at least 30 hours a week -- by an employer. Individuals who are self-employed, work fewer than 30 hours a week, are unemployed or are out of the workforce are not counted as being full-time employed. The GGJ metric measures only whether someone is employed full time by an employer and does not reflect job satisfaction or compensation. GGJ is not seasonally adjusted.

U.S. workforce participation rose to 68.6% in June, a record high since Gallup began tracking the measure, though it is equivalent to the 68.5% rates in April and June 2013. The participation rate is up from 68.0% in May and is more than one point higher than it was in June a year ago, when it averaged 67.5%.

Gallup's workforce participation rate is the percentage of U.S. adults aged 18 or older who work full or part time, or who are currently not employed but are actively seeking work. Perhaps the most significant difference is that the BLS seasonally adjusts its most commonly used measure of unemployment, while Gallup does not. Gallup's measure is strongly related to the metric that the BLS releases. However, the two measures do not always match on a monthly basis.

Gallup's measure of underemployment is a combination of U.S. adults in the workforce who are unemployed (5.2%) and those who are working part-time jobs, but desire full-time work (8.4%). Two of Gallup's economic measures, the GGJ rate and the workforce participation rate, improved in June, while the unemployment and underemployment rates held steady at fairly low levels. Another Gallup economic measure, the Job Creation Index, was near a record high in June. These Gallup measures, combined with the continued growth of the stock market and BLS reports that unemployment has reached a 16-year low, suggest the U.S. economy remains strong. Based on the apparent strength of the economy and the history of the GGJ rate, it is likely to hold steady or increase from June to July. These two months are typically the high points in each year, because of the seasonal patterns of employment.

The continued strength of the economy as measured by these indicators could benefit the Trump administration. In fact, the president has repeatedly touted his role in the economy's success. Americans -- albeit less than a majority -- give Trump some of his highest approval ratings on his handling of the economy.

Results for this Gallup poll are based on telephone interviews conducted June 1-30, 2017, on the Gallup U.S. Daily survey, with a random sample of 30,475 adults, aged 18 and older, living in all 50 U.S. states and the District of Columbia. For results based on the total sample of national adults, the margin of sampling error is ±1 percentage point at the 95% confidence level. All reported margins of sampling error include computed design effects for weighting. 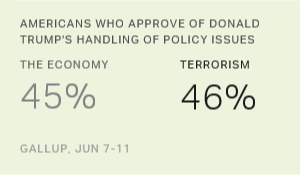 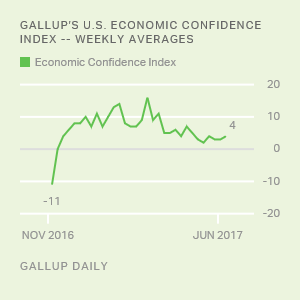