As a result, Democrats' confidence exceeds Republican confidence for the first time in Gallup's trend, though majorities of both groups remain confident. 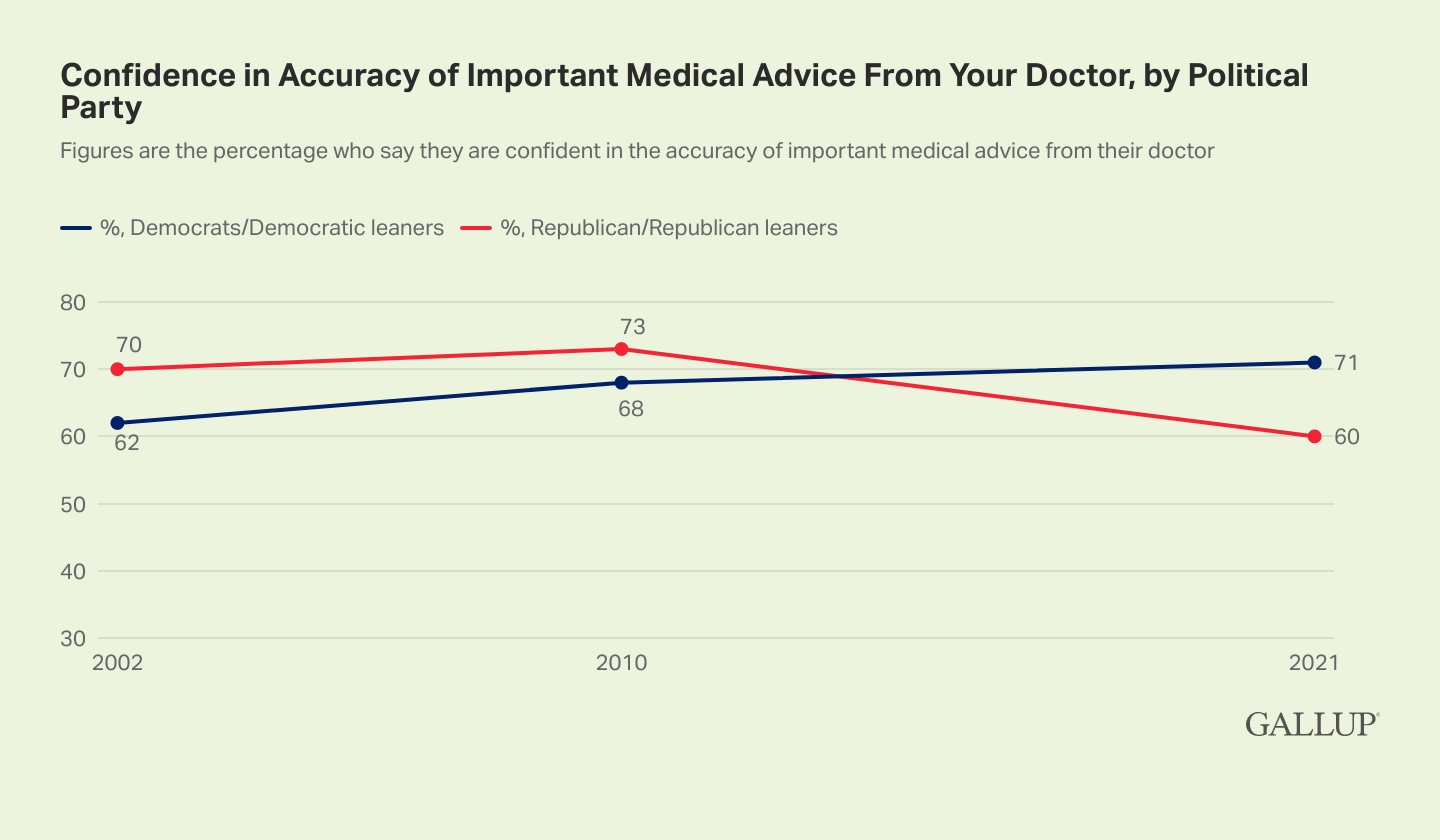 These results are based on Gallup's annual Health and Healthcare survey, conducted Nov. 1-16. The changes in attitudes about medical advice are consistent with Gallup's recent findings of partisan divergence in trust in science, more generally.

As fewer Republicans than in the past say they are confident in the accuracy of their doctor's advice, more now say they "usually feel it is necessary to check for second opinions or do [their] own research on the subject." Thirty-nine percent of Republicans and Republican-leaners hold this view compared with 26% in 2010 and 29% in 2002. Twenty-eight percent of Democrats and Democratic-leaners this year say they usually look for other opinions or information on medical issues.

The new polling comes more than 20 months into the COVID-19 pandemic, with more than 48 million Americans infected and close to 800,000 killed by the virus.

Ongoing Gallup polling about COVID-19 finds Americans are largely following advice from public health officials and doctors to limit the spread of the virus by getting vaccinated against COVID-19 or wearing face masks in public places. However, Republicans are far more likely than other subgroups to be unvaccinated and to have no intention of getting vaccinated. Throughout the pandemic, Republicans have also been less inclined to wear face masks in public or to practice strict social distancing.

The increase in Democratic confidence in advice from doctors -- and the decline among Republicans -- largely offset each other, but there has been a modest decline in the percentage of Americans confident in their doctors today vs. a decade ago.

Currently, 64% of U.S. adults are confident in the accuracy of the advice their doctor gives them about their health, while 35% usually feel it is necessary to check for second opinions or do their own research.

In 2010, 70% expressed confidence. The current figures are nearly identical, however, to those from the 2002 survey. 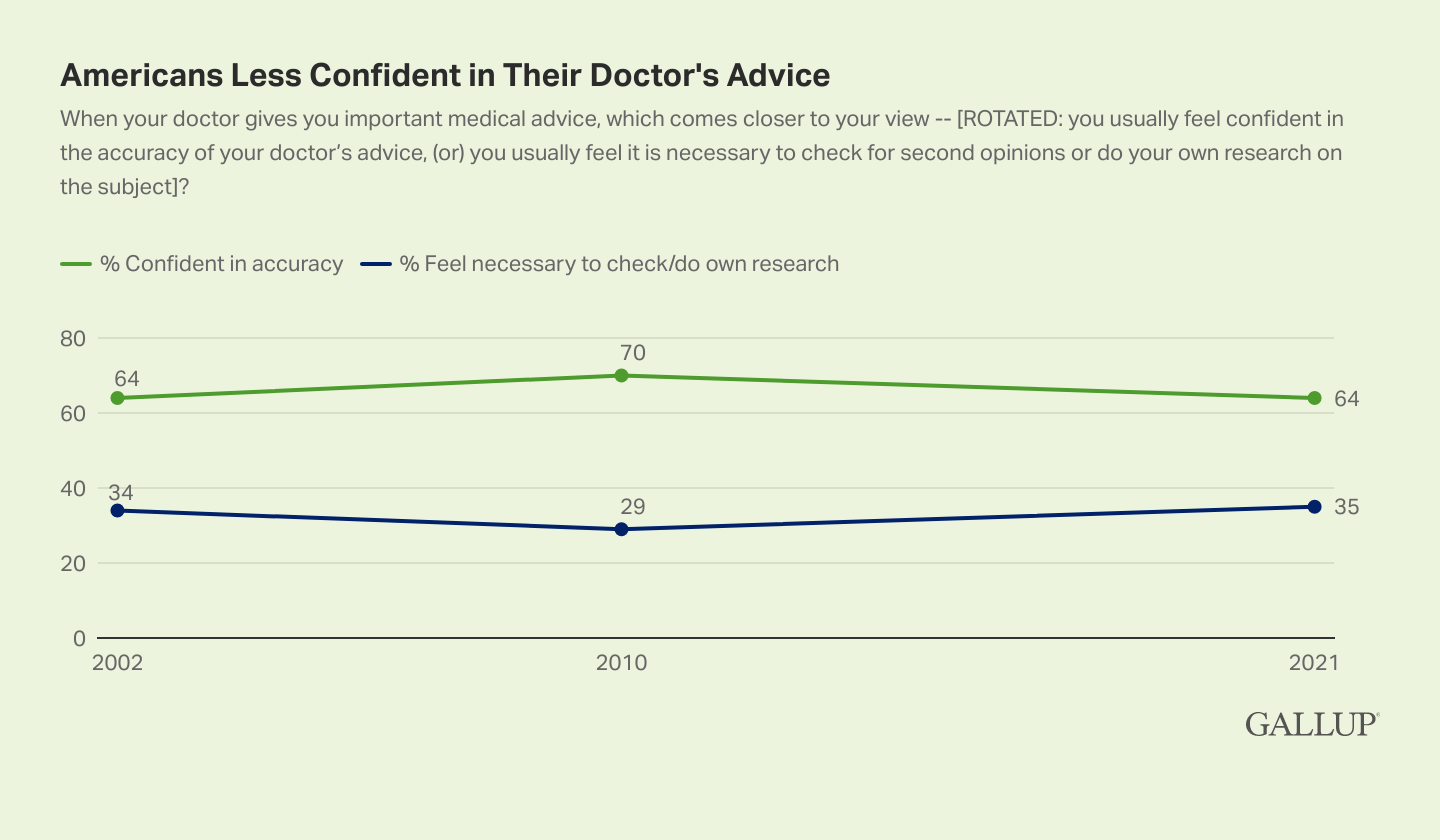 A separate question in the survey, which asks Americans whether they have more -- or less -- trust and confidence in their doctor than they had a year ago, also suggests an erosion in trust among Republicans. More Republicans and Republican leaners say their trust in their doctor has declined in the past year than say it has increased, 22% to 13%.

In 2002, the last time the question was asked, both Republicans and Democrats were twice as likely to say they had greater, rather than lesser, trust in their doctor's advice.

Americans still largely trust what their doctor advises them about their health, but they are less confident than they were 11 years ago, though no less confident than in 2002. Over the past two decades, Democrats have become more trusting in their doctor's advice, but Republicans are now less so. Republicans are also more likely to say they have lost trust in their doctor's advice over the past year than to say they have gained it.

Increasing skepticism of science and medical advice among Republicans likely is a significant factor in lagging COVID-19 vaccination rates compared with Democrats and political independents. Primary doctors could be a persuasive source of information for Americans on protecting themselves from the coronavirus. But it appears Republicans are less likely than others to heed their doctor's advice, which could put them at greater risk of suffering the worst effects of the coronavirus.