WASHINGTON, D.C. -- Americans remain more likely to see foreign trade as an opportunity for economic growth rather than a threat to the economy, but the 61% holding the positive view of trade is nearly back to what Gallup measured in 2016. During Donald Trump's presidency, no fewer than seven in 10 saw trade as an economic opportunity, including a high of 79% in 2020. But Americans today are still more positive toward trade than they were at any point from 1992 through 2016. 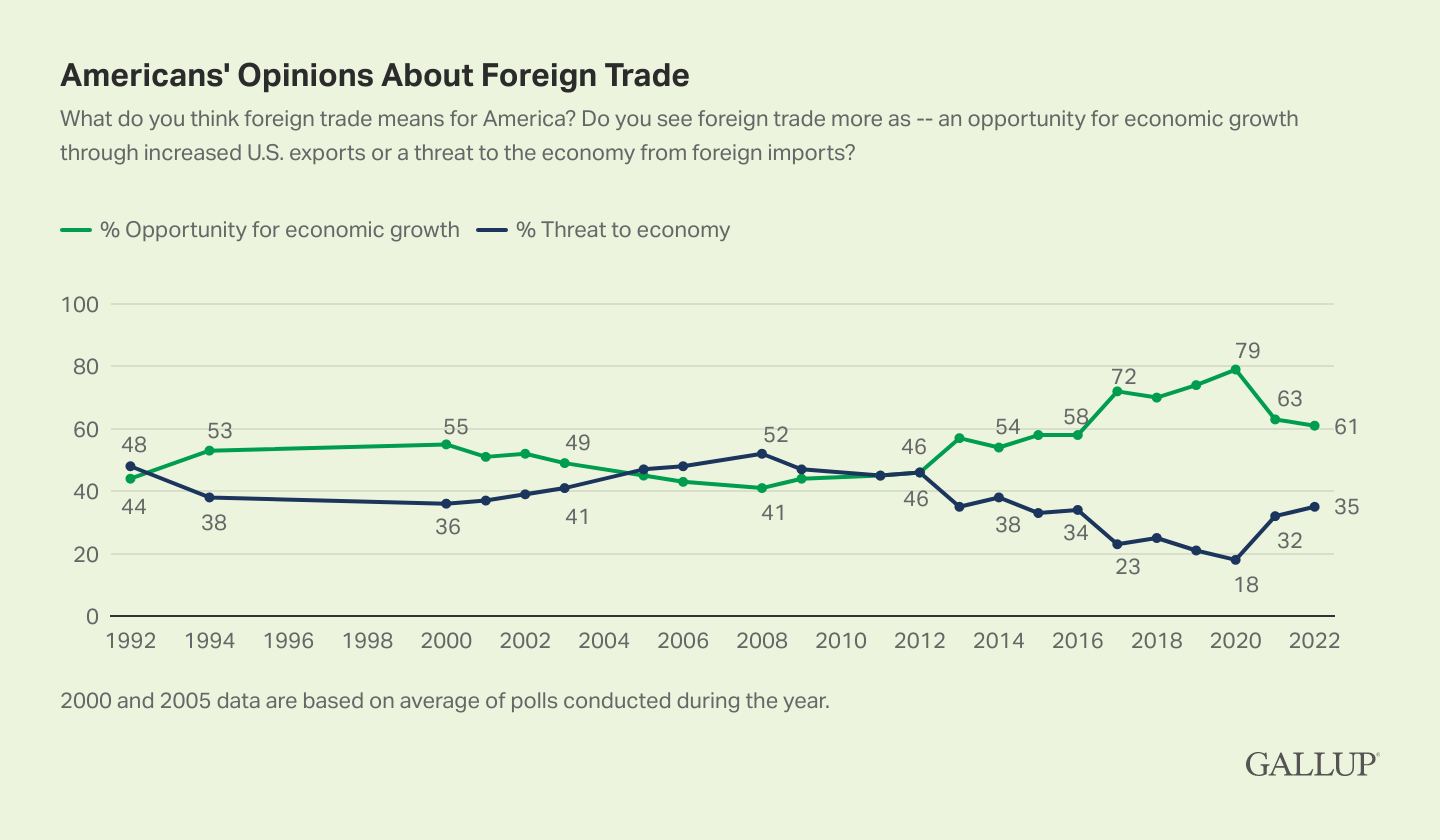 Line graph. Trend in Americans' opinions of foreign trade. In 2022, 61% say foreign trade is an opportunity for economic growth, and 35% say it is a threat to the economy. The percentage viewing trade as an opportunity is down from 79% in 2020, but higher than any measures before 2016.

Americans have typically been more likely to see foreign trade as an opportunity than a threat, but there have been exceptions, primarily in 1992 and between 2008 and 2012, either during or after economic recessions. In 2008, during the Great Recession, a majority of Americans perceived trade as a threat rather than an opportunity, the only time that has occurred in Gallup's trend.

By 2013, a majority of Americans once again took the optimistic view of trade, and it has remained above the majority level since.

Less Than Majority of Republicans See Trade as an Opportunity

In contrast to today, most Republicans were positive toward trade during the Trump years; the percentage saying trade was an opportunity ranged from 66% to 78% in 2017 through 2020. A year ago, in the first year of Joe Biden's presidency, that percentage tumbled to 44%, where it remains today.

Independents are now slightly less positive about trade than they were during the Trump era, when between 71% and 77% were.

Democrats' views have remained positive as well, though the 72% who currently see trade as an opportunity is lower than what Gallup measured during the previous three years, encompassing the last two years of the Trump administration and the first year of the Biden presidency. 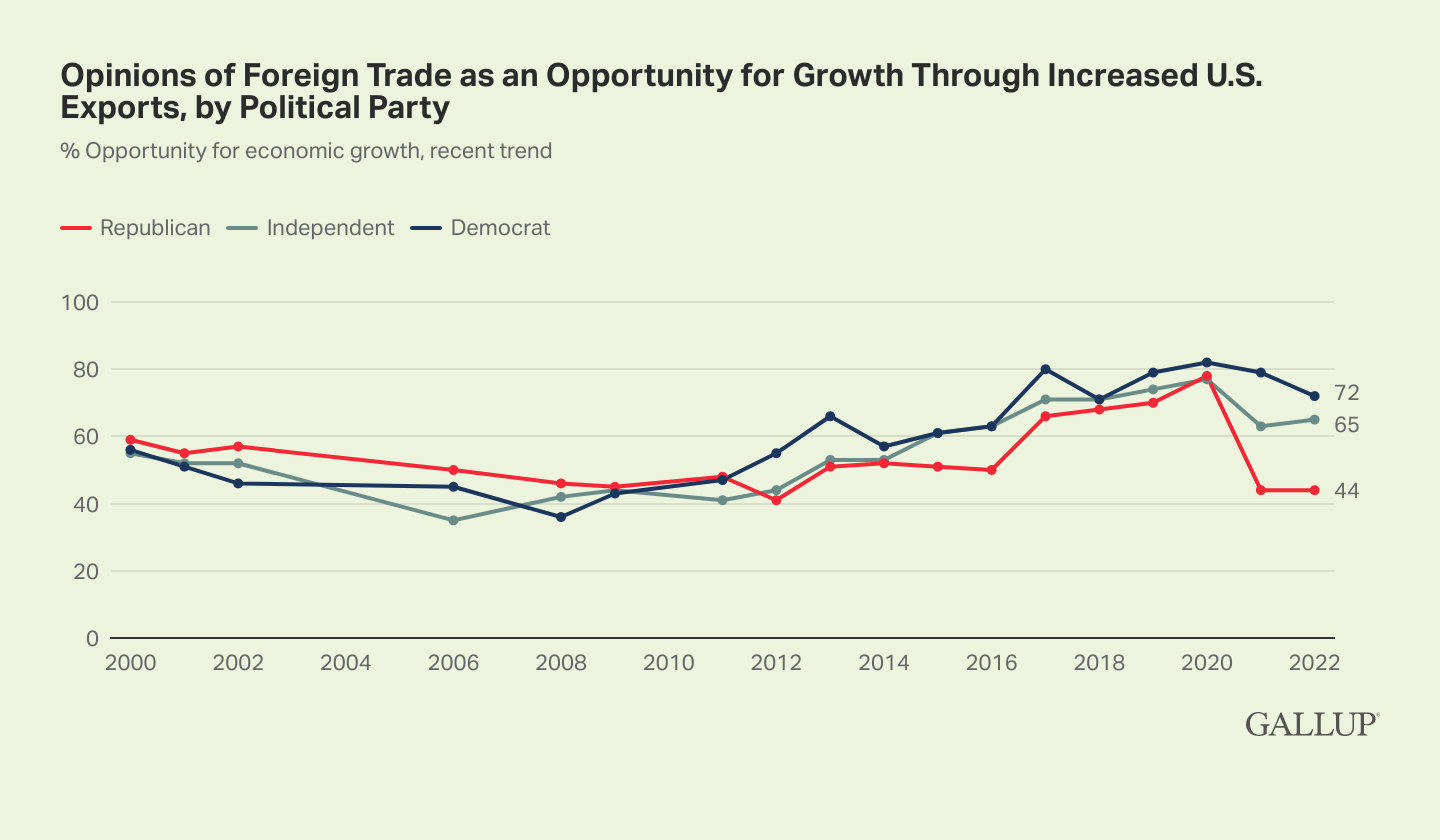 Line graph. Trend in Americans' opinions of foreign trade by political party. In 2022, 72% of Democrats, 65% of independents and 44% of Republicans say foreign trade is an opportunity for economic growth. Republicans were nearly as positive about trade as Democrats were between 2017 and 2020, but have become less so over the past two years. Until 2021, there were generally modest party differences.

For most of Gallup's trend, there have been fairly modest party differences in opinions about trade. Between 2000 and 2008, Republicans were consistently more positive than Democrats, averaging 53% and 47%, respectively.

Americans as a whole are less likely to see trade as an opportunity than they were from 2017 to 2020, but they still hold more positive views than in the 1990s and 2000s. The decline since 2020 has come mostly among Republicans, who likely appreciated Trump's tougher stance on trade. Republicans' views on the issue appear to be more partisan now than in the past, when their opinions didn't vary much by the president's party. Democrats' views have shifted over the long term, from being somewhat divided on whether trade was an opportunity or a threat, to now clearly seeing it as an opportunity.