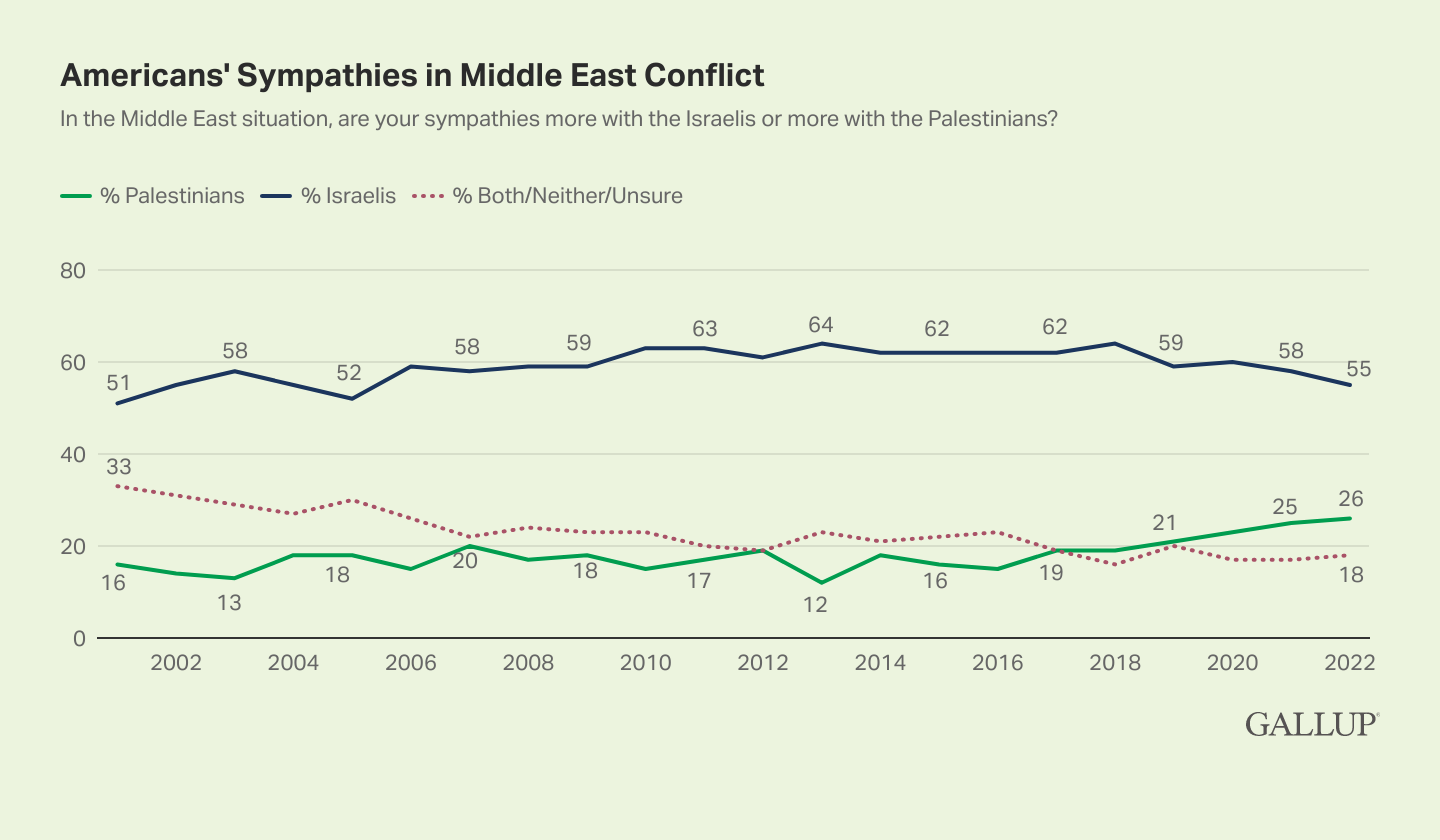 Line graph. Annual trend from 2001 to 2022 in Americans' preference for the Palestinians versus the Israelis when asked where their sympathies lie in the Middle East situation. The 55% sympathizing more with the Israelis in 2022 is down from 58% in 2021 and is the lowest since 2005, when it was 52%. The 26% now sympathizing more with the Palestinians is just one point higher than in 2021 but is the highest in the trend, and up from the low point of 12% in 2013.

While still wide, Israel's advantage on this question has narrowed over the past decade (since 2013) as sympathy for the Palestinians has edged higher. At the same time, sympathy for Israel has diminished slightly. The percentage of adults with no preference -- favoring both countries, favoring neither, or who are not sure -- is now 18%, but was higher before 2017.

The latest findings are based on Gallup's annual World Affairs survey for 2022, conducted Feb. 1-17.

Democrats Nearly Split in Sympathy for Israelis vs. Palestinians

The current divide among Democrats on the Middle East question is the latest in a decadelong decline in that party group's net sympathy for Israel, from 35 points in 2013 to two points today.

The sympathy gap for Israel has also narrowed substantially among independents, falling from 52 points in 2013 and about 40 points between 2014 and 2016 to 28 points today.

Over the same period, the preference gap for Israel has closed by nine points among Republicans, from 73 points in 2013 to the latest 64 points. The decline among Republicans was interrupted by surges in pro-Israel sentiment during the Donald Trump presidency, including in 2018 as the Trump administration prepared to move the U.S. embassy from Tel Aviv to Jerusalem in a strong show of support for Israel. 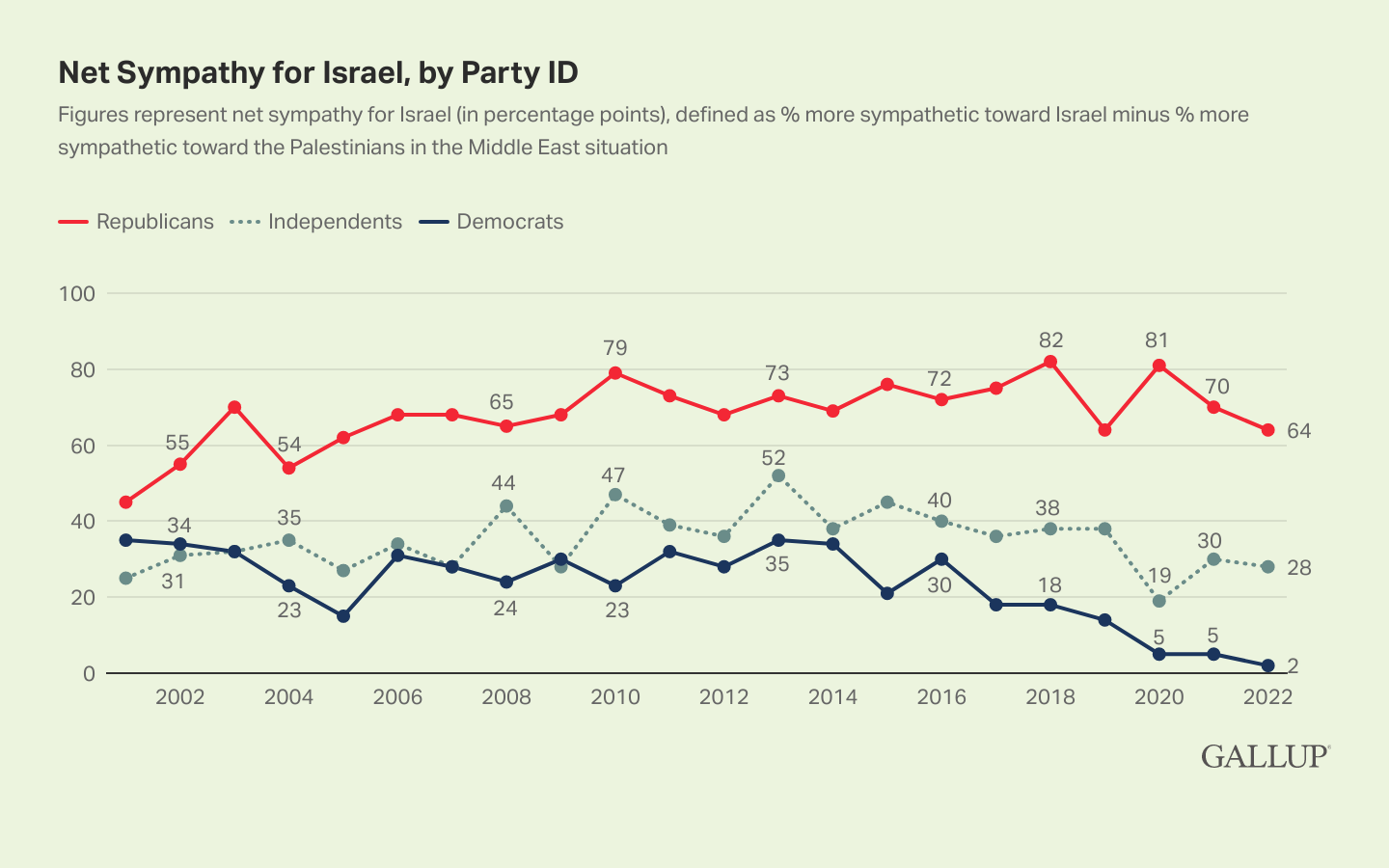 Aside from the differences by party, Gallup also finds substantial differences in sympathy for Israel by age. Whereas the majority of adults 55 and older (64%) and aged 35 to 54 (57%) are more sympathetic toward Israel, this drops to 40% among those under 35. In fact, nearly as many younger adults are more sympathetic toward the Palestinians (37%), resulting in a roughly even split in their preferences.

Subgroup differences on this question are also stark by political ideology, while there are minimal differences by gender or education level.

Notably, ideology magnifies the differences seen by party, so that conservative Republicans are more strongly pro-Israel than moderate/liberal Republicans. Likewise, conservative/moderate Democrats are decidedly pro-Israeli, while liberal Democrats now lean just as strongly in the Palestinians' favor. Liberal Democrats' 24-point margin in favor of the Palestinians this year is up from 15 points a year ago.

The 71% viewing Israel favorably today matches the average since 2013, while the 27% favorable to the Palestinian Authority exceeds the 22% in that period and continues the upward trend seen in this sentiment over the past decade.

Sympathy for Israel hit its all-time high in Gallup's trend in February 1991 after Iraqi Scud missiles struck Israel during the Gulf War. 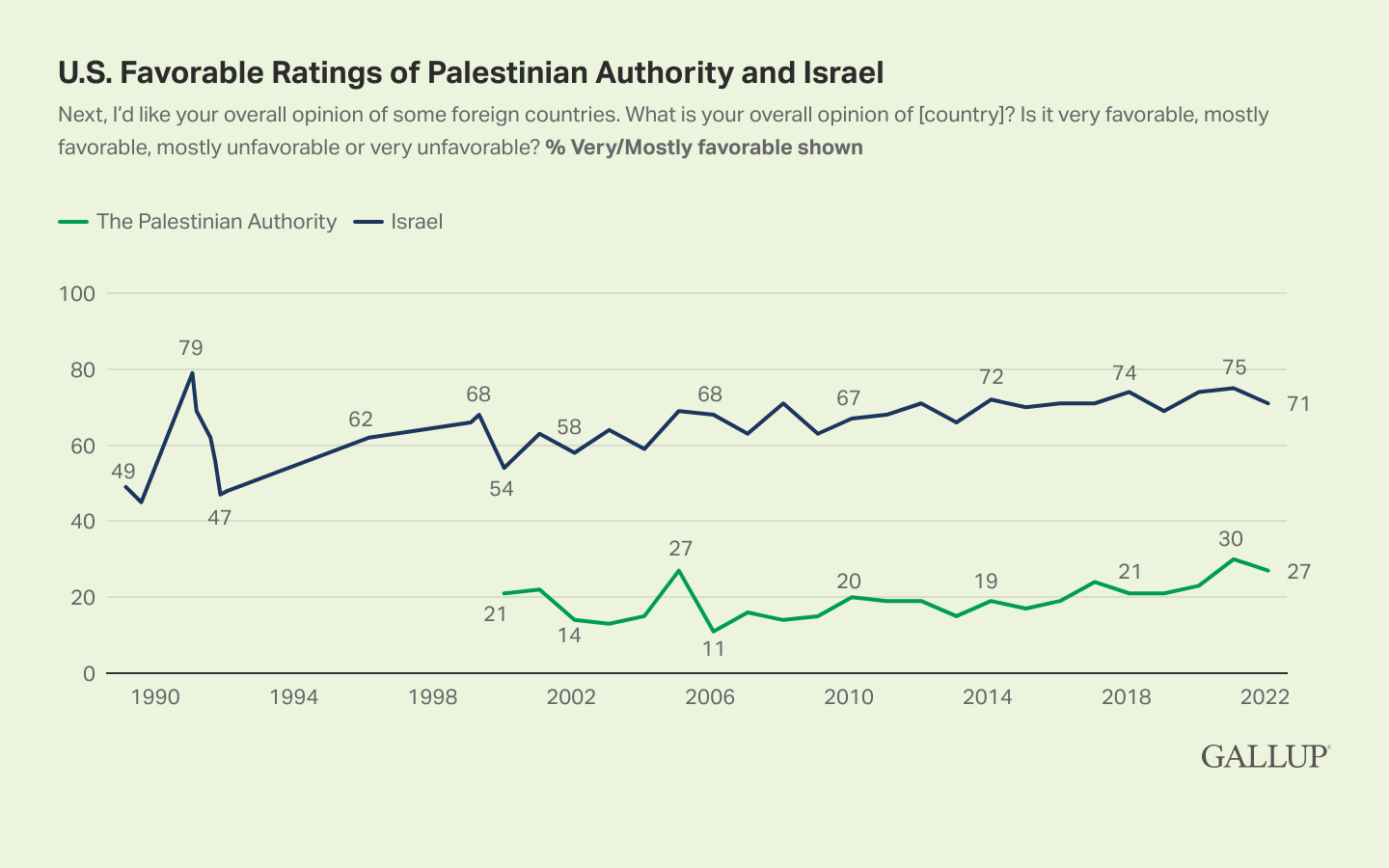 While Democrats have become less partial to Israel over time, they have maintained a largely favorable view of that country. After improving slightly between 2001 and 2008, Israel's image has wavered very little among all three political-party groups, with roughly eight in 10 Republicans, seven in 10 independents and just under two-thirds of Democrats viewing it favorably. 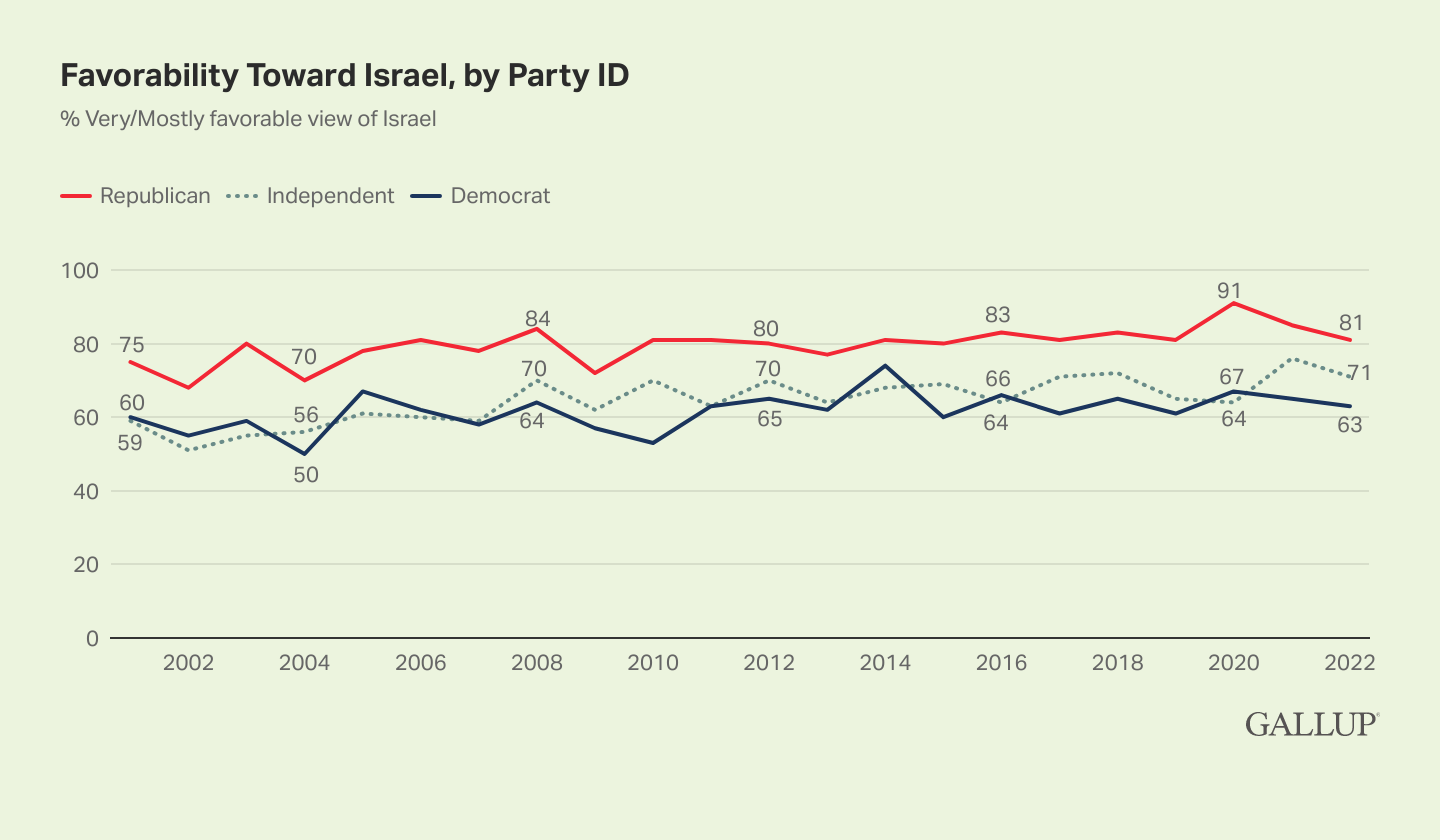 Line graph. Annual trend from 2001 to 2022 in favorable views of Israel by party ID. Favorability has consistently been highest among Republicans, while generally 10 to 20 percentage points lower among independents and Democrats. Views among the three political party groups have changed little over the past two decades. Currently, 81% of Republicans, 71% of independents and 63% of Democrats view Israel favorably. 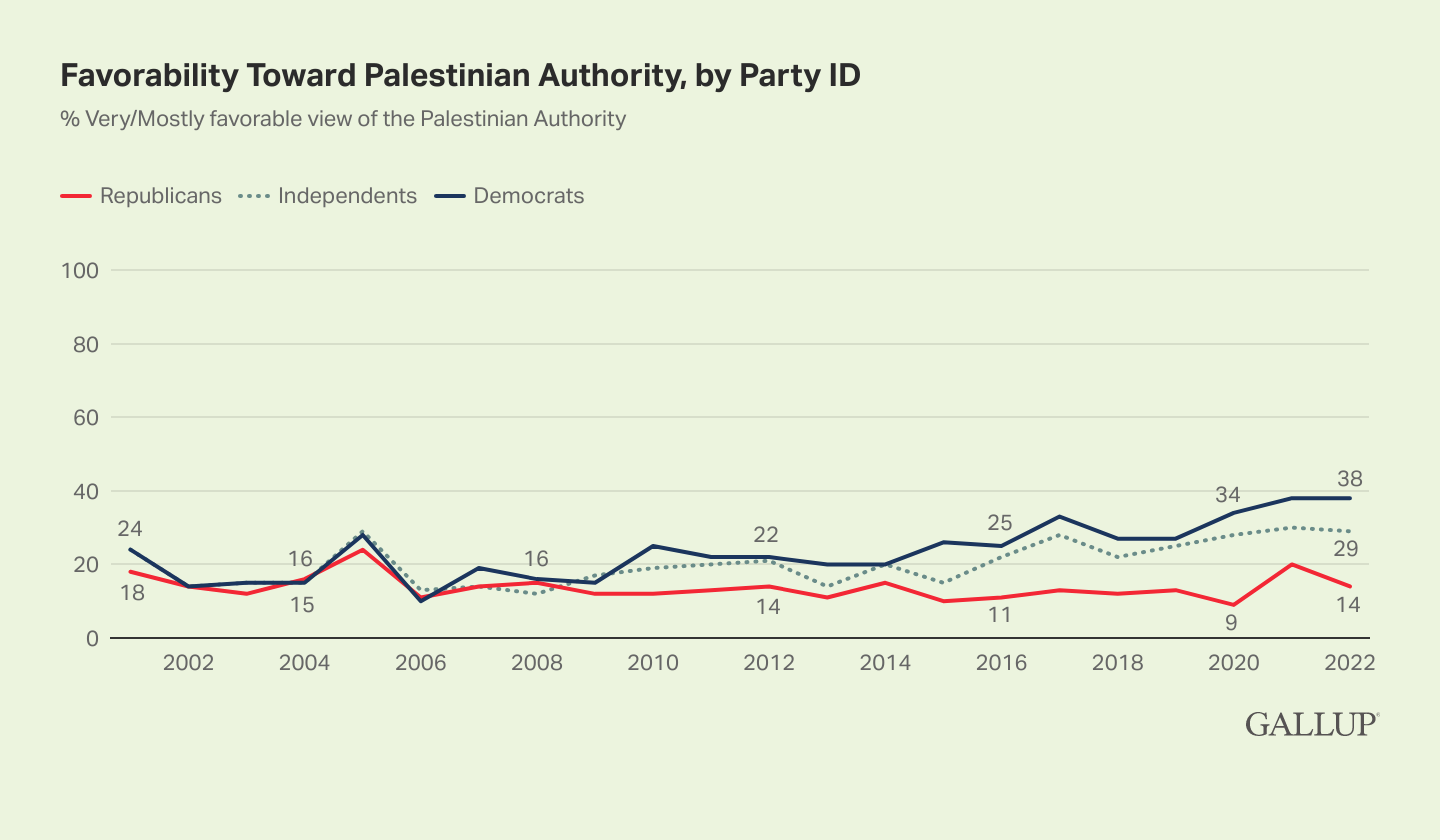 A majority of Americans continue to be in Israel's corner, saying they sympathize more with the Israelis than the Palestinians in the Middle East situation. Far more also feel favorably toward Israel than toward the Palestinian Authority.

The overall strength of Israel's sympathy advantage has declined in recent years as Democrats have become more divided on the question. In fact, the party itself is divided along ideological lines, with liberal Democrats siding with the Palestinians and moderate or conservative Democrats siding with the Israelis. But among both ideological subgroups, Democrats' increased sympathy for the Palestinians appears to stem from an assessment of the political situation, not from growing animosity toward Israel per se. Democrats are just as favorable toward Israel as they have been for at least two decades. Meanwhile, Republicans continue to side with Israel by a strong margin at the same time that most view the country favorably.