WASHINGTON, D.C. -- Roughly one in five Americans mention the high cost of living/inflation (17%), or fuel prices (4%) specifically, as the most important problem facing the U.S. today. Together, these account for over half of the economic issues that 35% of Americans cite as the nation's top problem. Within that group, 11% identify the economy in general as the chief problem.

Meanwhile, 68% of adults name one of several noneconomic issues as the chief problem. This category of concerns is led by various criticisms of the nation's government and leadership (22%) and the situation with Russia and Ukraine (9%).

Beyond the top concerns, unifying the country, race relations/racism and immigration each garnered 5% of mentions in the March 1-18 Gallup survey.

Concerns About Inflation Accelerate in Past Month

Inflation began rising as a public concern last fall, after being a nonissue for Americans throughout 2020. It registered no more than 2% of mentions in 2021 until October, when 5% cited it. But the percentage has increased more in the past month -- seven percentage points to 17% -- than in any month since the upward trend began. This increase in concern comes as the U.S. inflation rate continues to climb, and is now at its highest point in 40 years.

Similarly, after no more than 1% of Americans cited fuel or energy prices in 2021, that category has inched up as a top concern, from 2% in January to 4% today, amid record-high gas prices.

Meanwhile, the percentage citing the economy in general has hovered near 10% in most months since November, while roughly double that percentage has cited some aspect of government as the top problem. 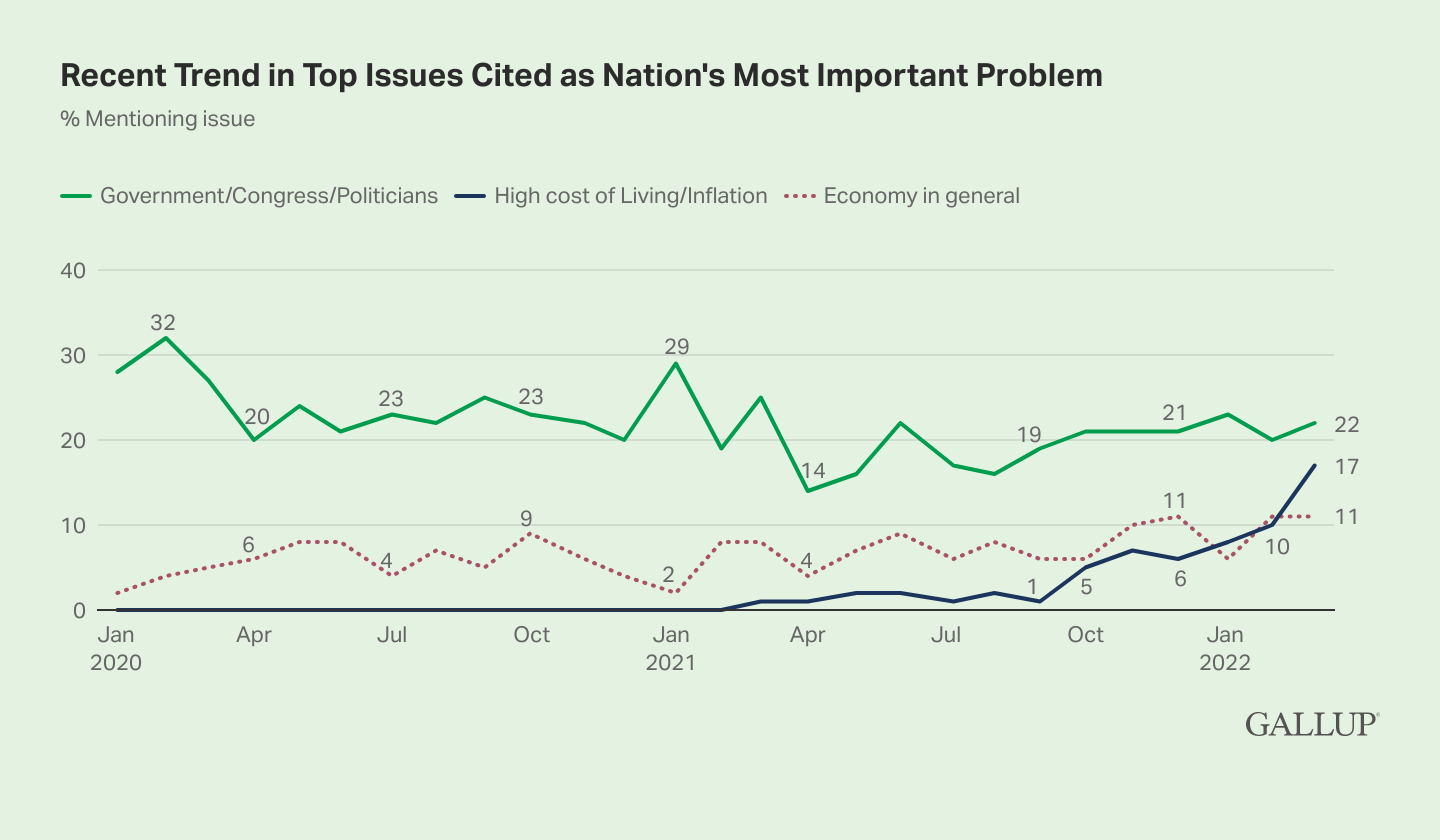 Line graph. Monthly trend from January 2020 to March 2022 in Americans' mentions of government, the high cost of living/inflation and the economy in general as the most important issue facing the U.S. Mentions of government were 20% or higher in 2020, then fell to 14% in April 2021 before rising back above 20% in October 2021 and are 22% today. Mentions of inflation were less than 1% throughout 2020, then registered up to 2% by mid-2021 before rising to 5% in October and are 17% today. Mentions of the economy were consistently below 10% until November 2021 and are 11% today.

Longer term, current mentions of inflation as the nation's most important problem are the highest Gallup has recorded since 1985. Still, they are well below the extraordinarily high percentages, reaching 52%, found in the early 1980s, when inflation was still elevated after a period of "stagflation" in the 1970s. 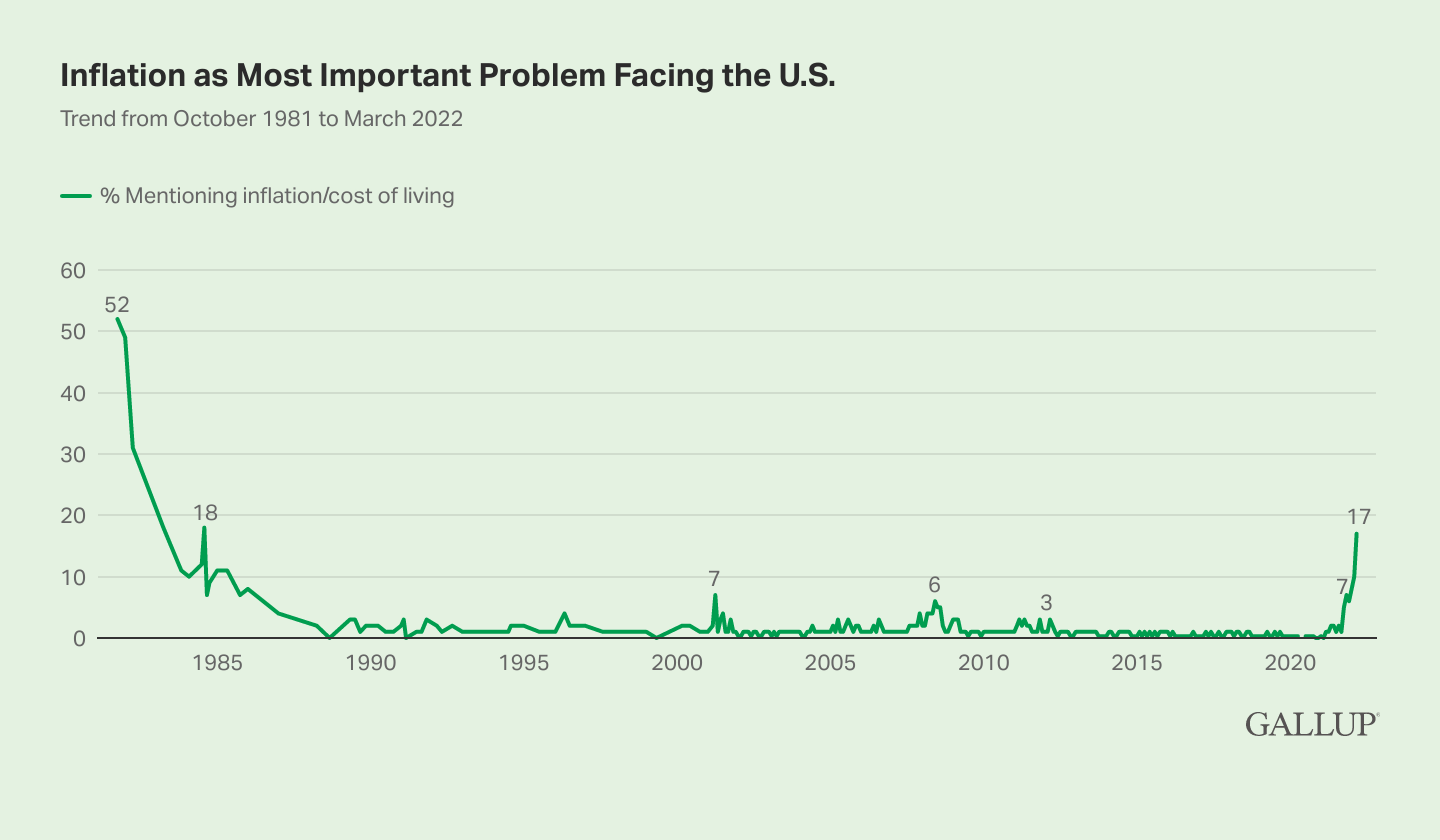 The March survey also measured public concern about 14 different national issues, directly, by asking respondents to say how much they worry about each.

Inflation emerges as a leading public concern on this basis as well, with 59% saying they worry about it "a great deal." It is roughly tied with the 58% worried a great deal about the economy.

Slightly smaller majorities worry this much about crime (53%) and hunger/homelessness (52%), while just under half worry about access to healthcare (49%), federal spending (48%), and the availability and affordability of energy (47%).

Americans are least concerned about unemployment, with 32% saying this worries them a great deal.

Concerns about inflation vary less by household income than they do by partisanship.

Likely reflecting their mounting concerns about inflation, Americans have grown more pessimistic about the economy over the past month, with 75% now saying conditions are getting worse, up from 70% in February and 67% in January. Americans' outlook for the economy is now about tied with the most negative it has been since the early days of the pandemic in April 2020.

Americans also have a rather bleak view of current economic conditions, with just 22% considering them excellent or good while 35% term them "only fair" and 44% poor. The combined only fair/poor percentage has been steady near 80% since November.

Gallup summarizes its economic assessments in its Economic Confidence Index, which registered -39 in February. This is the lowest confidence score since the pandemic began.

Inflation doesn't dominate Americans' perceptions of the most important problem facing the country today the way it did in the early 1980s, but it's more top-of-mind than it's been in over three decades and appears to be taking a toll on Americans' broader economic confidence.

Additionally, when prompted to rate how much they worry about each of several perennial domestic and economic issues confronting the country, Americans express the most worry about inflation, along with the economy in general, which they may closely associate with inflation.

Results for this Gallup poll are based on telephone interviews conducted March 1-18, 2022, with a random sample of 1,017 adults, aged 18 and older, living in all 50 U.S. states and the District of Columbia. For results based on the total sample of national adults, the margin of sampling error is ±4 percentage points at the 95% confidence level.

Items in the issue concern list are each asked of approximately 700 national adults and have an associated margin of sampling error of ±5 percentage points at the 95% confidence level.