WASHINGTON, D.C. -- War between Ukraine and Russia will likely make the world's hunger crisis even tougher to fight. The countries are two of the world's major suppliers of staple grains like wheat, and a protracted crisis increases the likelihood of supply interruptions and higher food prices for many people -- including those who can least afford them.

Gallup data offer insight into the populations most likely to suffer from a prolonged disruption: People in countries reliant on wheat from Ukraine or Russia, where large segments of their populations were also struggling to afford food before the war broke out.

Many of the countries on this list, including Egypt, Turkey and Kenya, are also dealing with political instability and conflict, situations only made worse when populations go hungry.

Majority of Turks Struggled to Afford Food in the Past Year

Turkey received a full 75% of its wheat imports from Russia and Ukraine in 2019, ranking it among the most dependent on sources from those countries. In 2021, a slim majority of Turks (51%) reported being unable to afford food in the past 12 months. Turkey's current vulnerability may be further heightened by its lingering economic crisis and high levels of inflation. 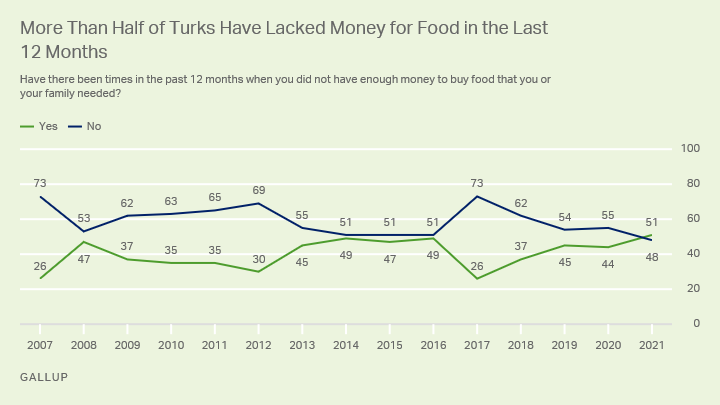 More Than Four in 10 Egyptians Had Problems Affording Food

Egypt received 70% of the country's grain imports from Russia and Ukraine in 2019. More than four in 10 (41%) Egyptians in 2021 reported lacking money for food at some point in the last 12 months. This measure was on the higher end of Gallup's trend for the issue but lower than the record-high 48% of Egyptians that said so in 2016.

Egypt's economy was initially hit hard by the COVID-19 pandemic, but it could still register positive growth for 2020 and 2021. However, inflation has been up in the country, and further increases in food prices related to Russia's invasion of Ukraine may erase the modest gains the Egyptian economy has made. 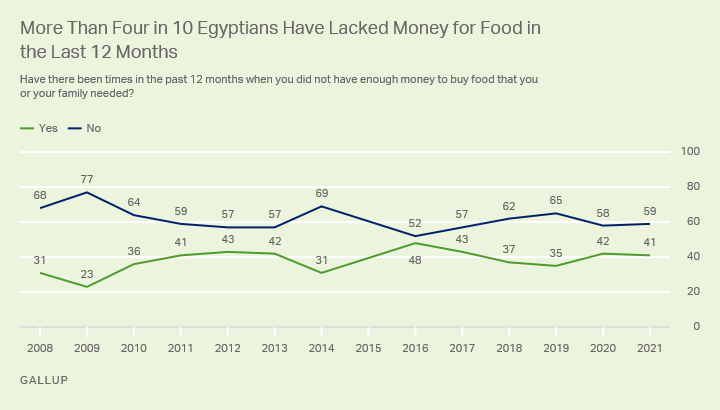 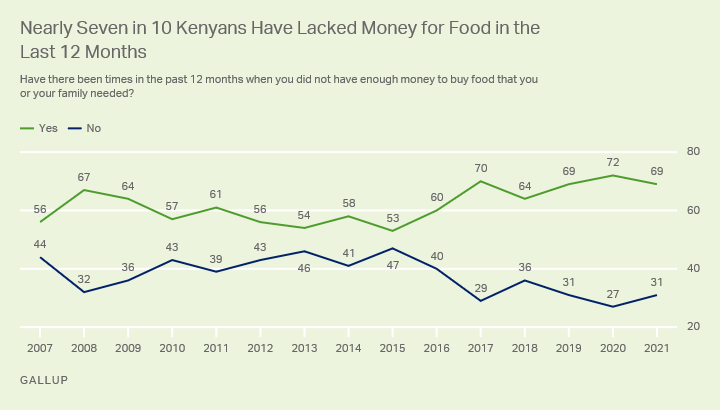 It is unclear how long disruptions in the food supply will last, though it has already triggered higher wheat prices around the globe. For the developed world, increased prices for wheat will likely result in painful increases in food prices, but these populations will continue to get by. In the developing world, where populations already struggle to afford food, they may result in substantial additional hardship and instability.

Disruption of Ukrainian wheat supplies may prove doubly painful for countries already squeezed by food insecurity. Ukraine was the second-largest supplier of wheat to the United Nation's World Food Programme (WFP) in 2020 and 2021. Unable to procure wheat from Ukraine, WFP will likely have to purchase the grain from other, more expensive sources and thus have less aid to provide to those at the greatest risk.