WASHINGTON, D.C. -- At 42%, President Joe Biden's latest job approval rating marks his seventh consecutive reading below 44%, while a majority of Americans, 54%, continue to disapprove of the job he is doing.

The latest readings are from a March 1-18 Gallup poll, during which Russian military forces pressed farther into Ukraine and many Ukrainians fled the country. In response to Russia's continued military action, the Biden administration increased sanctions on the country and Congress passed an aid package to support Ukraine.

Meanwhile, the sagging U.S. economy worsened, as inflation hit its highest point since 1982 and gas prices rose to all-time highs. One bright spot for the country was the further decrease in COVID-19 infections.

In addition to the four issues measured in February and March, the latest survey finds 45% of Americans approving of Biden's handling of the environment and 38% of his handling of energy policy. This is the first time Gallup has measured approval on these two issues.

Since September, Americans' overall approval of Biden has ranged from 40% to 43%, well below the majority-level ratings he received during the first six months of his presidency. 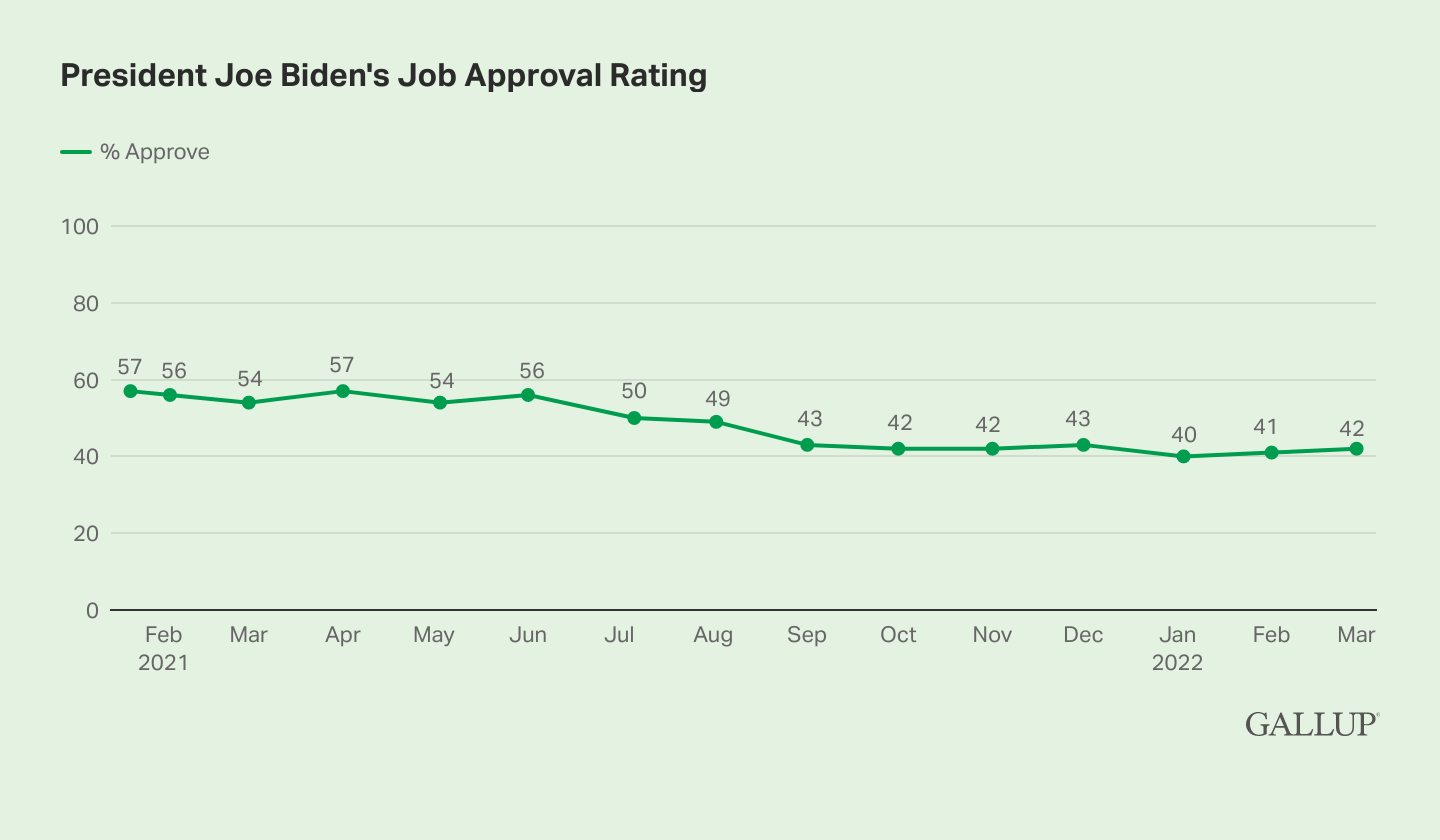 The drop in Biden's approval rating last July was largely the result of a decline in approval among political independents. Their rating of the president has not risen above 50% since. Democrats' current 84% rating of Biden is more than twice independents' 38% and dwarfs Republicans' 5%. 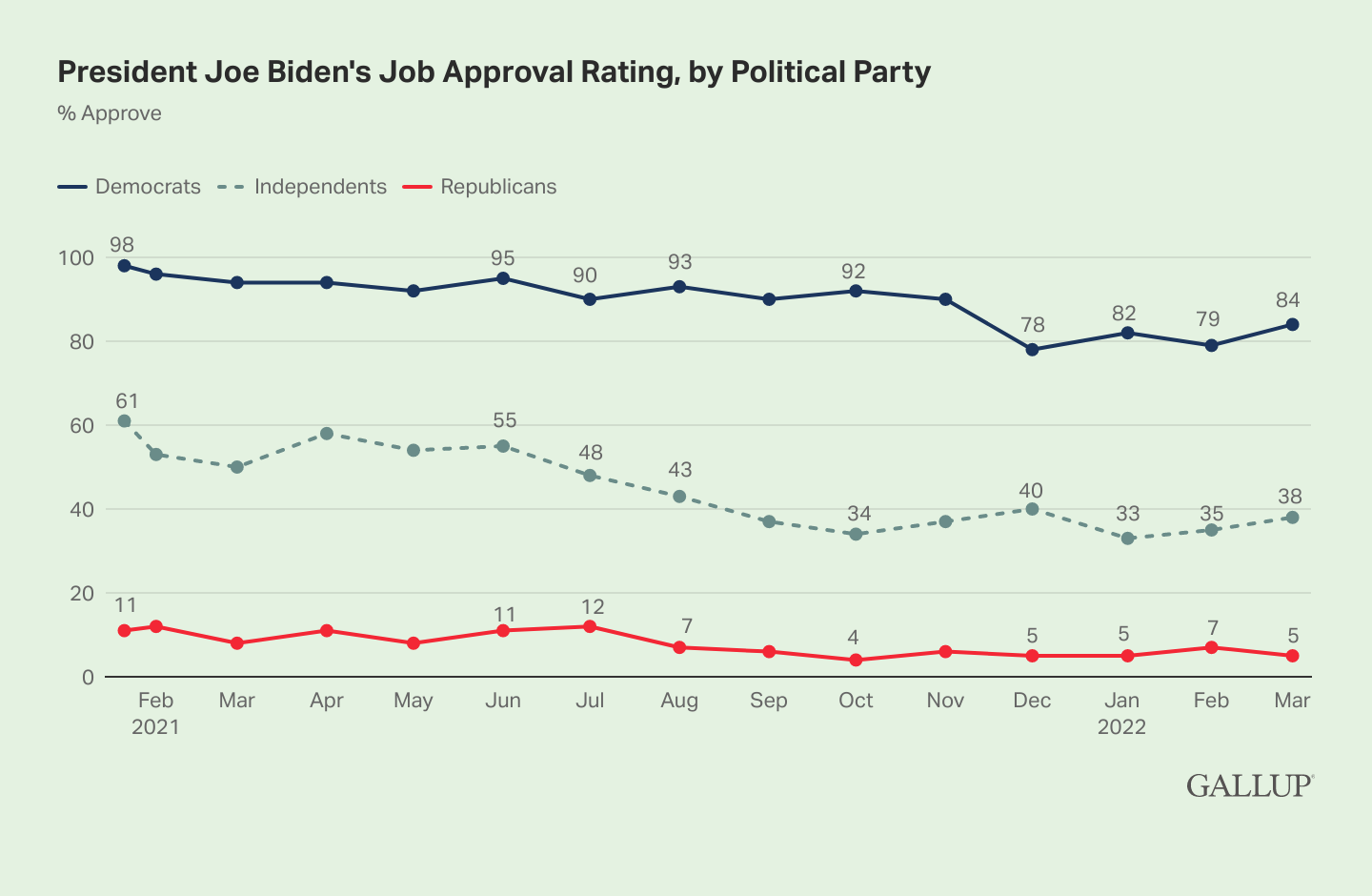 Gallup has periodically tracked Biden's approval ratings on the economy, foreign affairs and the coronavirus response since the beginning of his presidency. Early on, Biden had majority-level approval on all three issues; however, by November, those ratings had all fallen below 50%. Biden's handling of the pandemic has consistently been his greatest strength among these issues and is back above the majority level in the latest poll.

The current uptick in approval of Biden's response to COVID-19 is likely tied to Americans' improved outlook for the pandemic, while the relatively steady but low ratings for his handling of the economy and foreign affairs may reflect stubbornly persistent inflation and the challenging international climate right now. 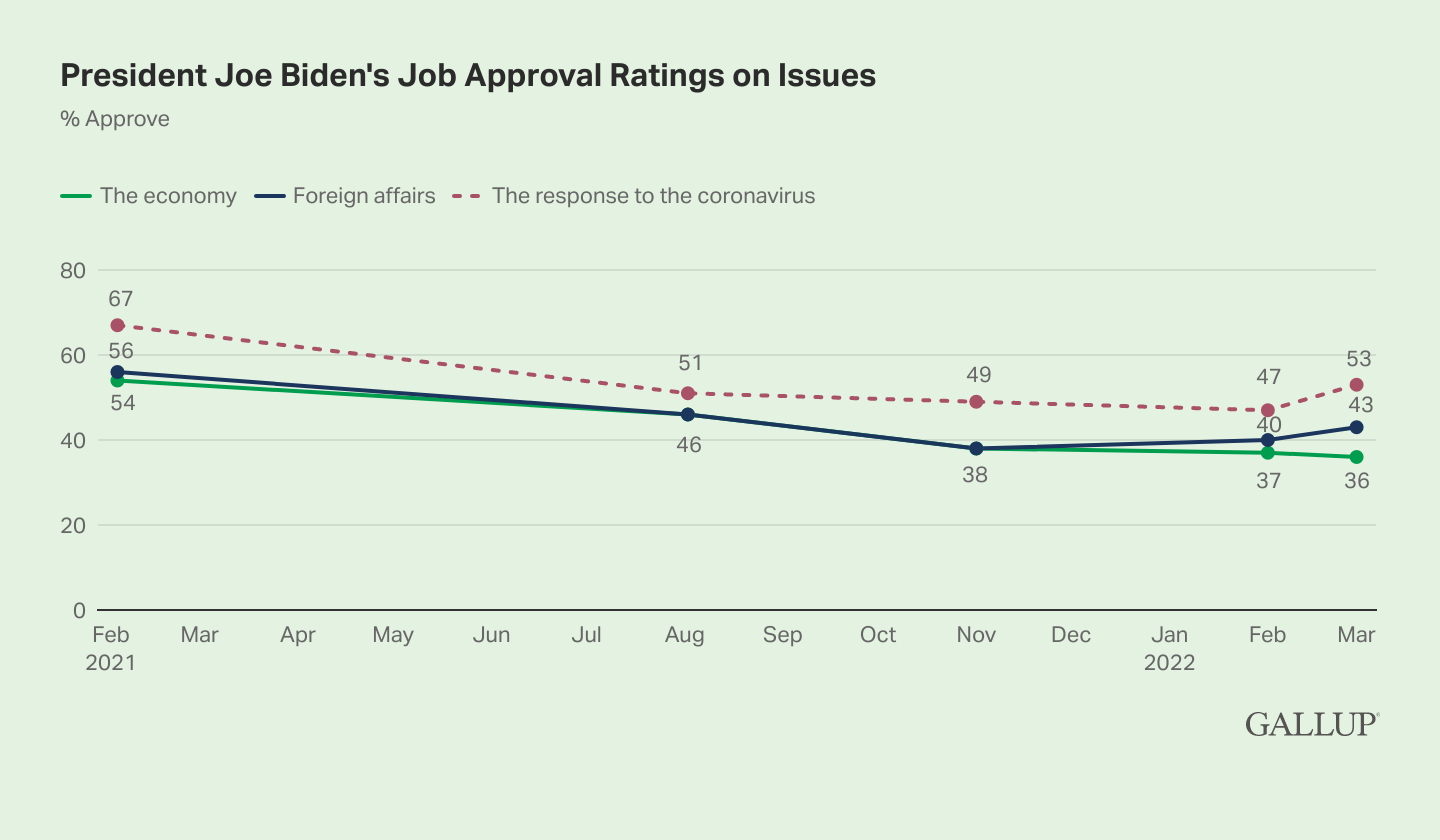 Line graph. President Joe Biden's approval ratings for his handling of the economy, foreign affairs and the response to the coronavirus since February 2021, when he had majority-level approval on all three issues. By November, those ratings had all fallen below 50%. Biden's handling of the pandemic has consistently been his greatest strength among these issues and is back above the majority level at 53% in the latest poll. Currently, 43% of U.S. adults approve of his handling of foreign affairs and 36% of the economy.

Biden's rating for his handling of the situation with Russia has been measured on only three occasions, including a 39% reading in August, 36% last month and 42% currently.

Partisans' approval ratings of Biden's handling of the six issues are politically polarized, much like his overall job rating, although a slim majority of independents and about one in five Republicans express approval for his handling of the pandemic.

Biden is currently facing sizable challenges at home and abroad, and his approval ratings are largely mired in mediocrity. In the current hyperpolarized climate, his ability to achieve approval ratings above 50% hinges largely on independents, whose support for him dwindled during the coronavirus surge last summer and fell further after the U.S. withdrawal from Afghanistan.

The two areas of modest growth for Biden this month -- his handling of the response to COVID-19 and the Russia-Ukraine war -- are fragile and volatile situations. With a new variant of the coronavirus gaining steam and the fighting in Ukraine intensifying, further gains in Biden's approval ratings may prove elusive.