WASHINGTON, D.C. -- Americans are significantly more worried about the energy situation in the U.S. than they have been in a decade. Nearly half of Americans, 47%, say they worry a great deal about the availability and affordability of energy. This is up from 37% a year ago and is more than double the percentage in 2020, when energy concern was at its low point in Gallup's trend. 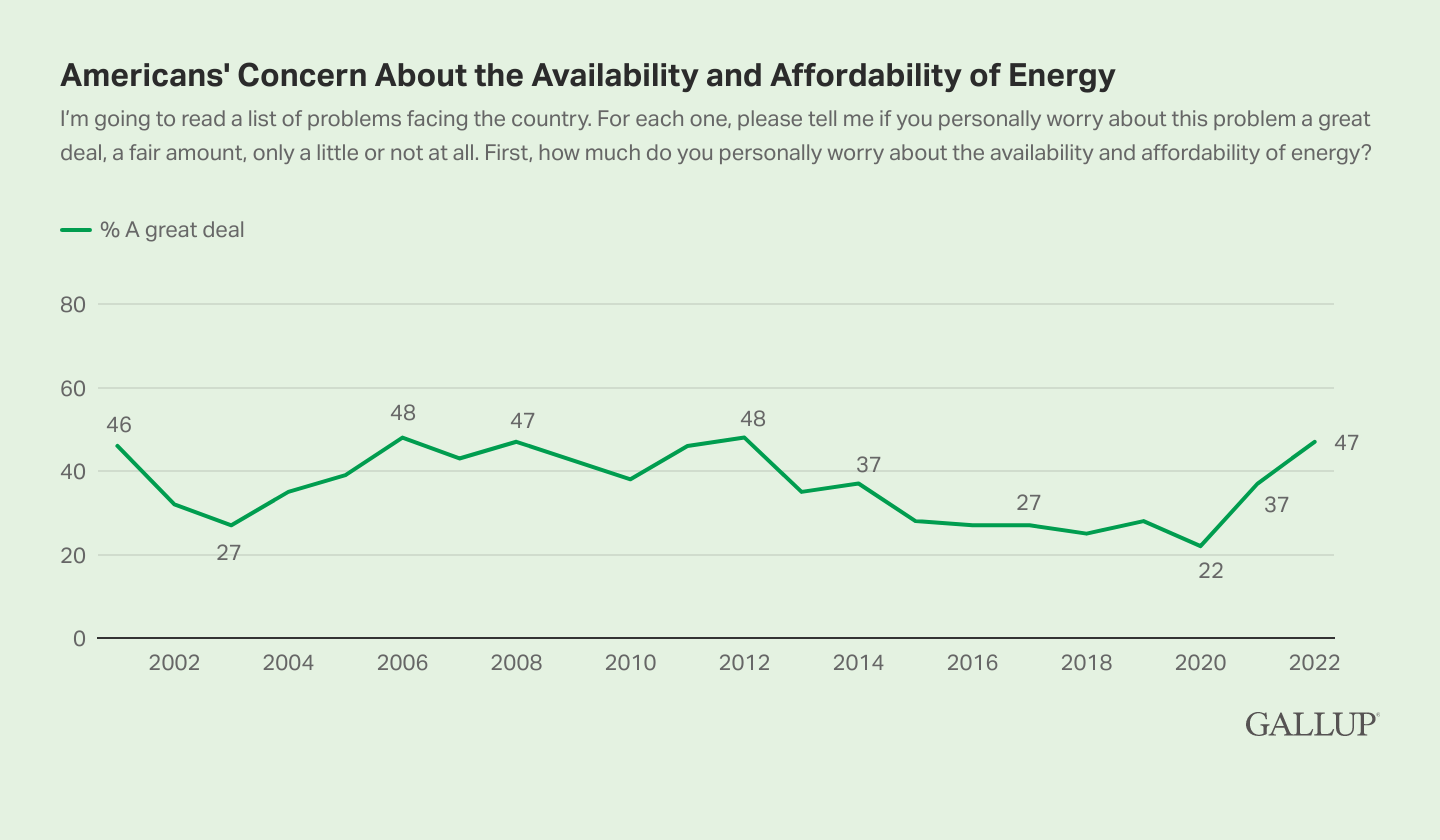 Line graph. Trend in the percentage of U.S. adults who worry a great deal about the availability and affordability of energy. Currently, 47% worry a great deal, up from 37% in 2021 and the trend low point of 22% in 2020. The level of worry has been similar to what it is now in several times over the past two decades.

The March 1-18 poll was conducted as gasoline prices reached record highs in the U.S., averaging more than $4.00 per gallon nationwide. High gas prices have often been a factor in prior years when energy concern was high, including 2006 through 2008 and 2012.

Gallup first asked the question about the seriousness of the U.S. energy situation in 1977, during the 1970s energy crisis, and updated it frequently the rest of that decade. The current percentage describing the energy situation as very serious is similar to what it was in the late 1970s, as well as between 2006 and 2009.

The trend high point of 58% saying the energy situation was very serious came in May 2001, when energy prices were rising and the state of California issued rolling blackouts to deal with energy shortages there. 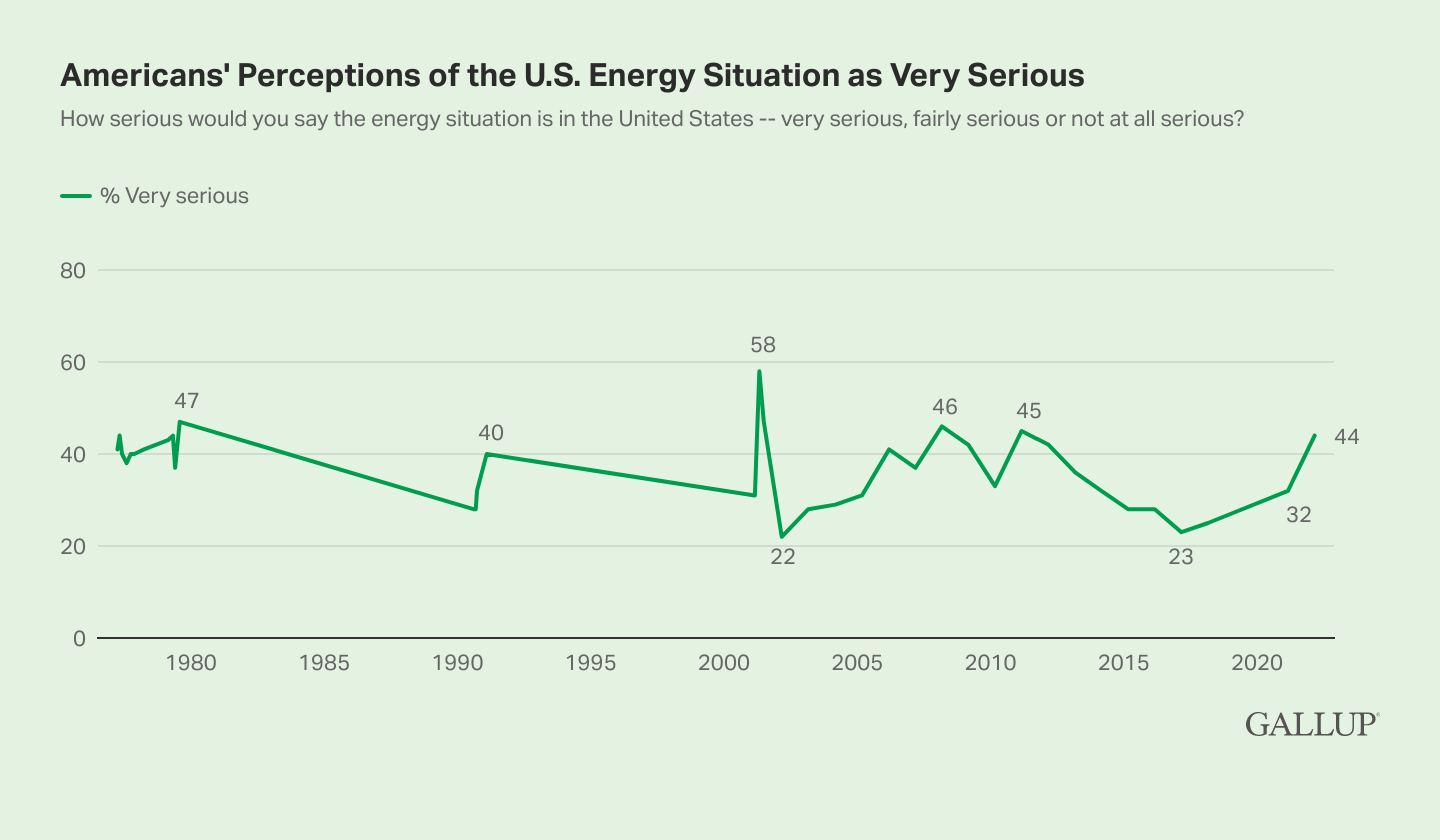 Line graph. Trend in Americans' perceptions of the U.S. energy situation as very serious. Forty-four percent say the energy situation is very serious, the highest since 45% in 2011. The all-time high was 58% in May 2001. There were similar percentages to the current percentage in August 1979, June 2001, March 2008 and March 2011.

Although Americans are more concerned about energy than they were a year ago, they are no more likely than last year to predict there will be a critical energy shortage in the U.S. in the near term. Currently, 55% foresee such a shortage in the next five years, compared with 53% a year ago. The percentage predicting a shortage reached or exceeded 60% in 2001 (60%), 2008 (62%) and 2011 (61%).

Asked to consider the tradeoffs in protecting the environment and developing new energy supplies, Americans are about as likely to say environmental protection should be given higher priority (50%) as to say energy production should (46%).

Gallup first asked this question in 2001 and has done so in most years since then. Typically, Americans have prioritized environmental protection more than energy production, including by a 59% to 34% margin, the largest measured, in the prior update from 2018.

However, the gap in favor of the environment has typically narrowed when energy concerns were greater. In March 2010 and March 2011, significantly more prioritized energy production, the only times that has occurred in the trend's history. 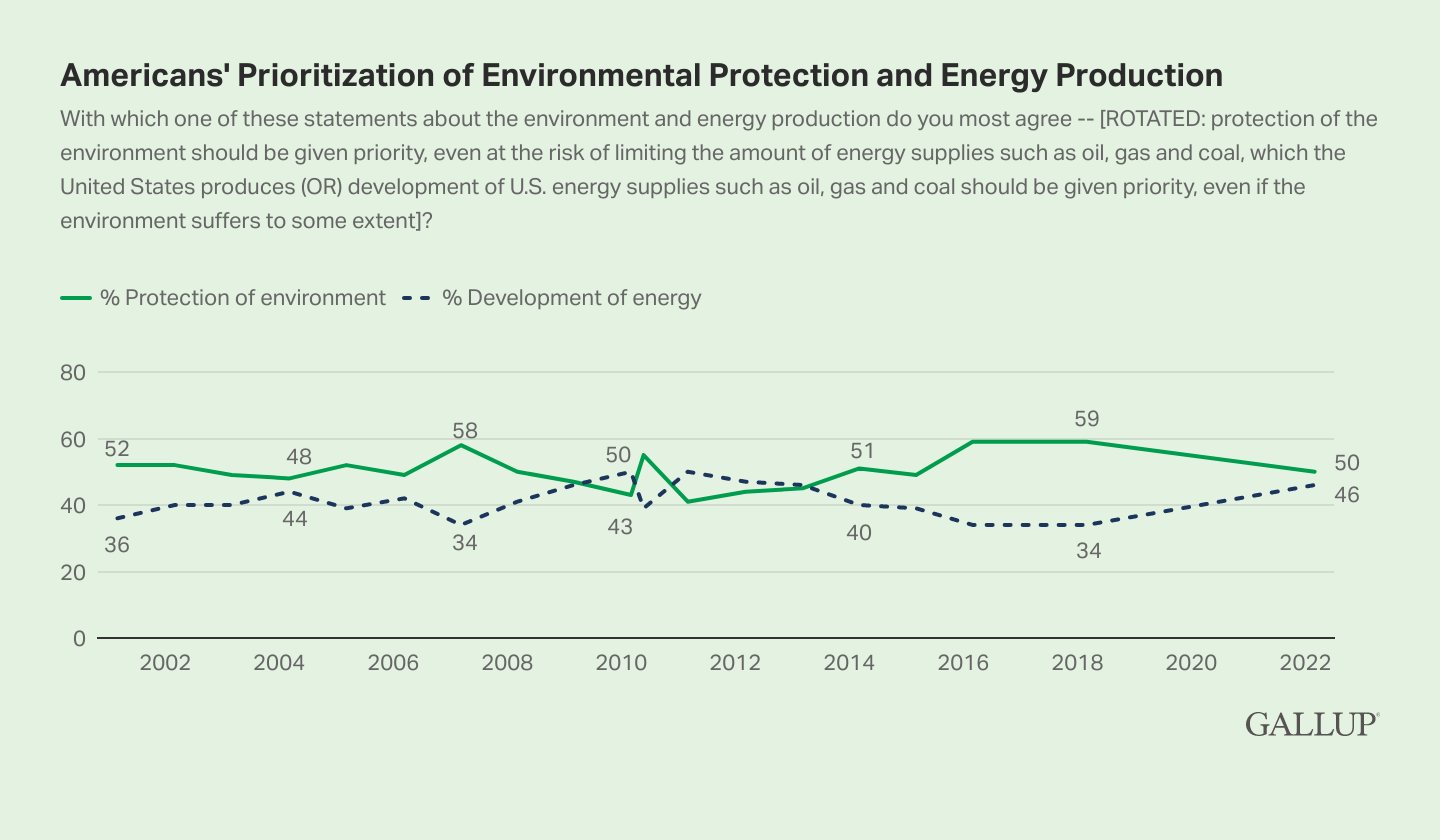 Two-thirds of Republicans now say they worry a great deal about energy availability and affordability, compared with 48% of independents and 28% of Democrats. Both Republicans and independents show heightened worry from a year ago, while Democrats' concern hasn't changed.

Republican concern also spiked last year, with 46% worried a great deal about energy, compared with 9% in 2020, reflecting rising gas prices but likely also the change from a Republican to Democratic presidential administration at the start of 2021.

Democrats were more concerned about energy in 2020 than Republicans were, but are now much less so. 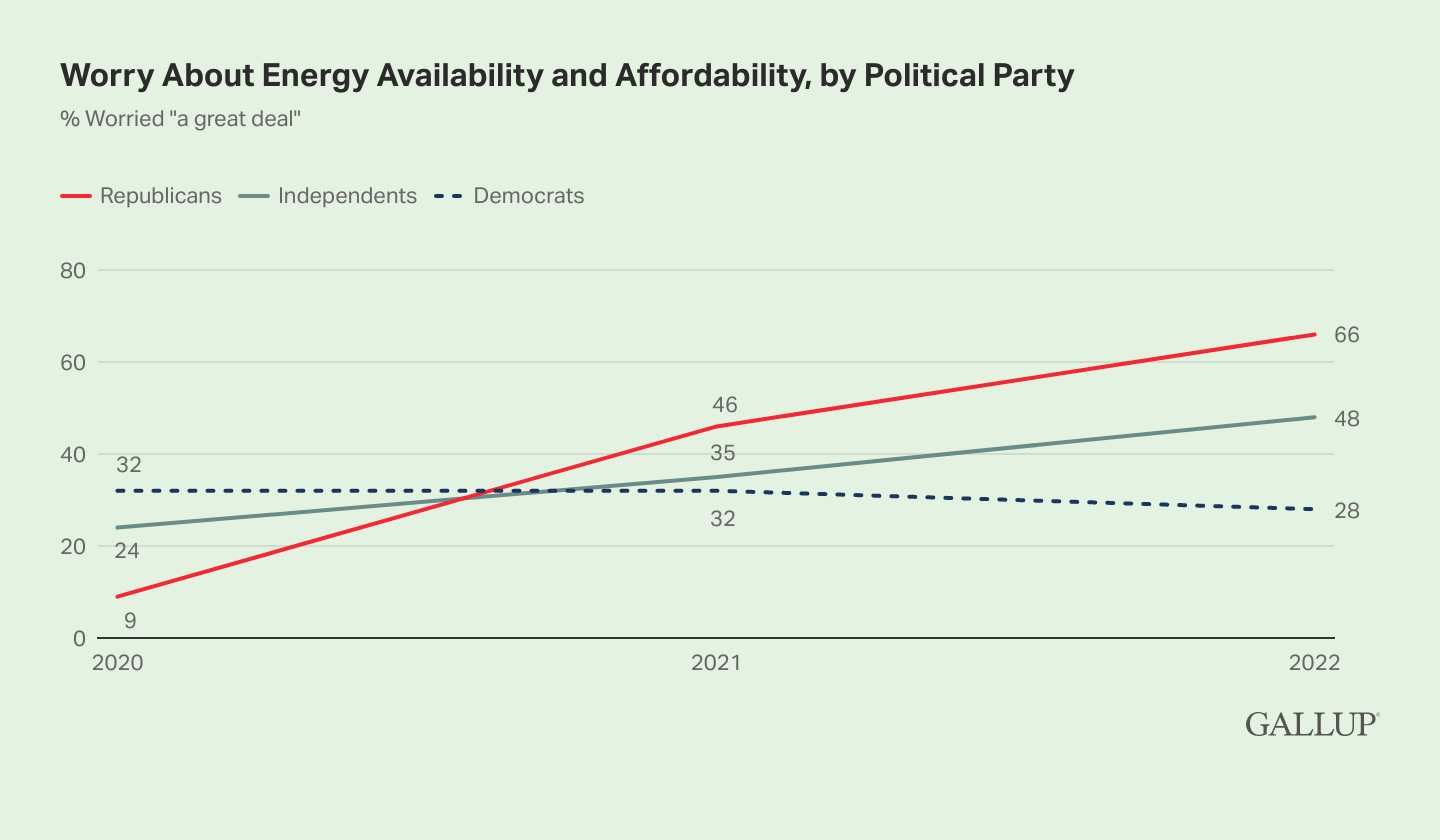 Nearly two-thirds of Republicans, 64%, also describe the U.S. energy situation as very serious, up from 36% in March 2021. There has been a modest increase among independents, from 29% to 38%. The 30% of Democrats who say the energy situation is very serious is essentially the same as a year ago (34%).

Since 2018, when Gallup last asked Americans to say whether the U.S. should prioritize environmental protection or energy production, Republicans and independents have adopted more pro-energy positions.

Republicans in 2018 prioritized the development of energy supplies but now are even more likely to do so. Independents tilted strongly toward environmental protection in 2018 but now are divided. Democrats' opinions remain decidedly pro-environment.

Regardless of the asymmetrical partisan reactions at play, as a whole, Americans are substantially more worried about energy than they were a year ago and in 2020, when concern was at a two-decade low. The level of concern apparent now, when gas prices have hit record highs, is on the higher end of Gallup's trend.

Americans still see inflation as a bigger concern than gas prices or energy, but high gas prices are certainly helping to drive those inflation worries. Energy concerns are causing Republicans and independents to adjust their priorities when it comes to environmental protection and energy production, as has occurred in past years.