WASHINGTON, D.C. -- For the seventh straight year, U.S. public concern about the quality of the environment is near its two-decade high, with 44% of Americans worrying "a great deal" about it. The rest are about evenly divided between those worrying "a fair amount" (27%) versus "only a little" or "not at all" (28%).

The recent stretch of elevated public concern about the environment contrasts with more muted worry in the first 15 years after Gallup began tracking this public sentiment in 2001. From 2001 to 2015, closer to a third of Americans said they worried a great deal about the environment, with the figure exceeding 40% only twice, in 2001 and 2007. 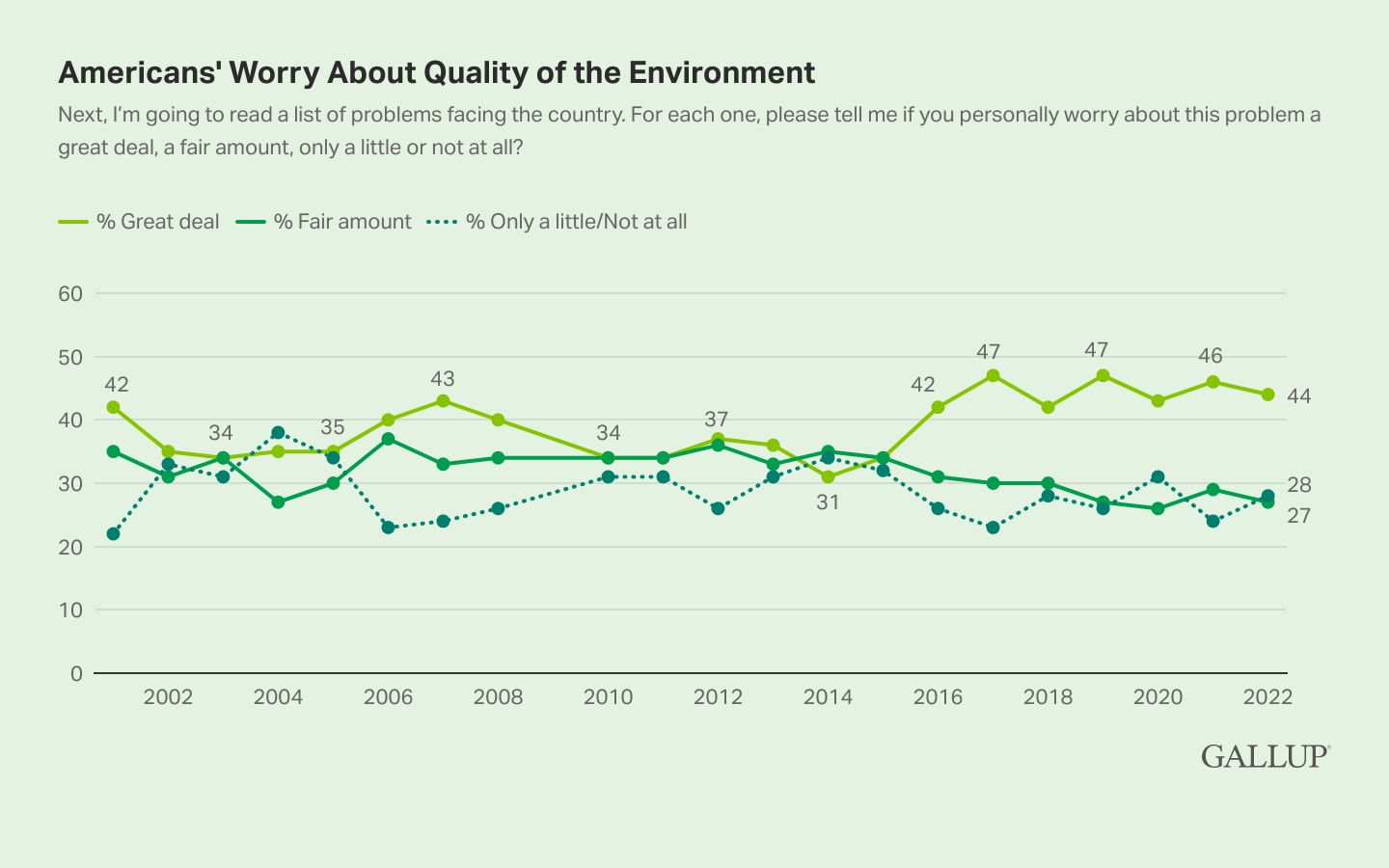 These results come from Gallup's March 1-18 Environment poll. The annual survey has been conducted each March since 2001.

Worry Driven by Democrats and Independents

Consistent with their party's strong focus on environmental issues, including global warming, Democrats are far more likely than Republicans to harbor substantial concern about the environment, 56% versus 24%, respectively. However, bucking the typical pattern of political independents' views falling midway between Republicans' and Democrats', independents (50%) today are nearly as likely as Democrats to say they worry a great deal about the environment, leaving Republicans as the distinct outlier. While this wasn't always the case, independents' views have typically been closer to Democrats' since 2016.

Rising environmental worry among Democrats and independents starting around 2015 has driven overall public concern higher, even as Republicans' concern has remained consistently low.

Democrats' concern was highest during Donald Trump's presidency and has eased slightly since President Joe Biden took office in 2021; however, it is still higher than it was through most of Barack Obama's presidency, from 2009 to 2016. Meanwhile, independents' concern peaked in 2019 and has since remained near that level. 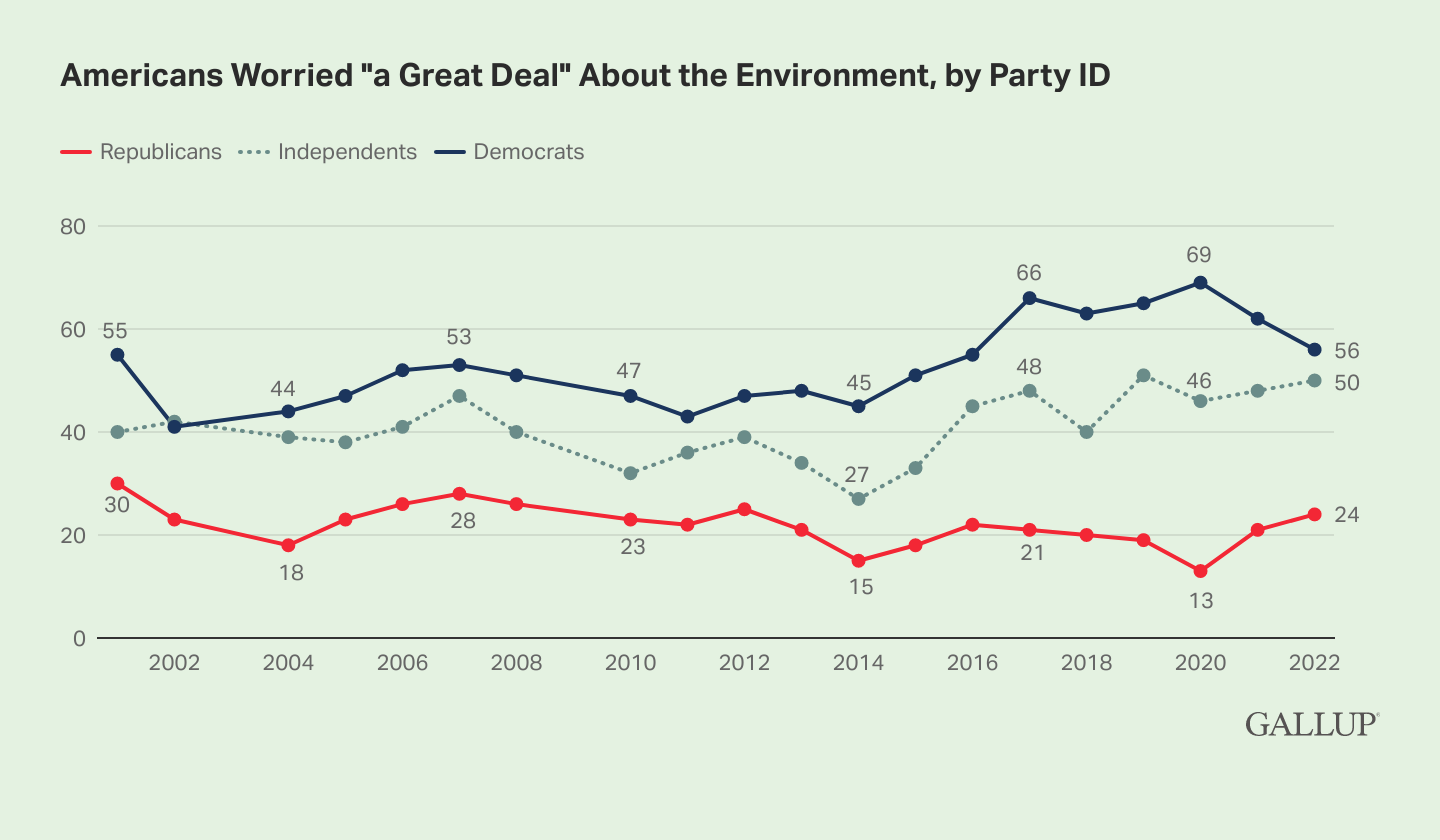 Another sign of Americans' heightened concern about environmental quality comes from the recent increase in those describing the quality of the environment as "poor." This has risen from 9% in 2015 to 18% today.

Over the same period, the percentage rating the environment as "excellent" or "good" has declined from 50% to 39%, while the percentage considering it "only fair" has stayed about the same. 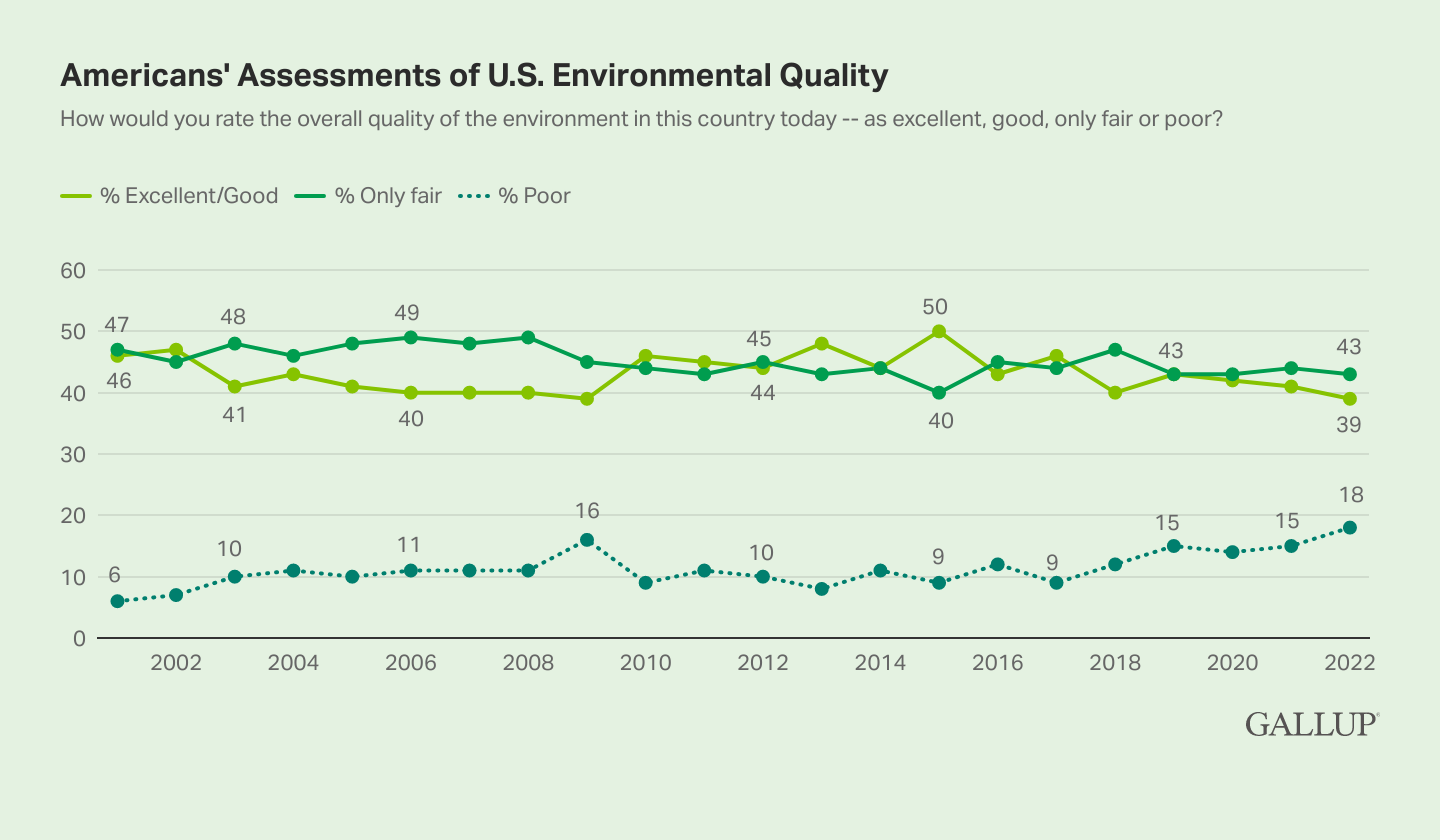 Meanwhile, when asked about the direction in which the environment is trending, more Americans have consistently perceived conditions to be getting worse rather than better. However, the extent of this pessimism has varied, seemingly tied to beliefs about federal policy. 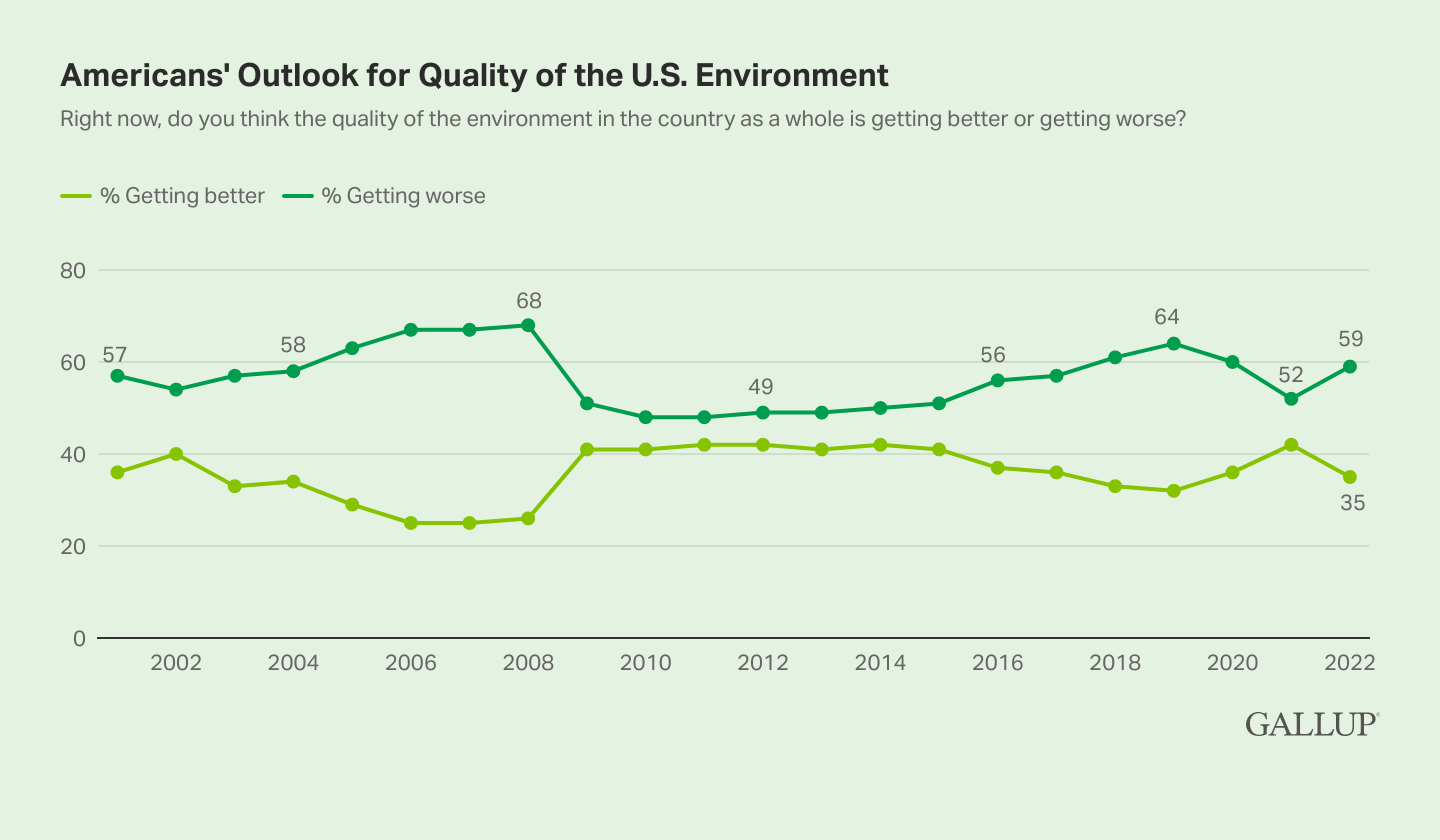 Evaluating this trend by party makes it clear that most of these changes reflect waxing and waning pessimism about the environment among Democrats, corresponding with the political context. They are much more likely to believe the environment is getting worse when a Republican is in office than when a Democrat is.

The increase in pessimism this year, however, is due mainly to more Republicans and independents saying conditions are worsening than they did last year, while Democrats' views have remained the same.

In terms of which environmental issues Americans worry about, Gallup finds pollution of drinking water and pollution of natural waterways at the top of the list, with majorities saying they worry a great deal about each. This includes more than six in 10 Democrats, 58% of independents and about four in 10 Republicans.

Global warming is also a major concern for Democrats, at 67%, while ranking last among independents and Republicans. Air pollution and loss of tropical rain forests rank as mid-level concerns for all groups.

The environment is more of a concern to Americans today than it was before Trump took office. It's not clear whether Trump's presidency was the sole catalyst behind heightened concern among Democrats and independents during this period, or if his term merely coincided with worsening news about environmental problems, but the signal is unambiguous. And while Democrats' concern has lessened a bit since Biden took office, it still exceeds where it stood before Trump.

Democrats' concern about the environment will likely only be amplified by the latest alarm sounded by the United Nations over global warming and the need to slash carbon emissions. Until now, Biden's mixed record of success in implementing his environmental agenda, including being unable to achieve congressional passage of a major climate and social spending bill last year, is likely a major reason that barely seven in 10 Democrats approve of him on the issue. His 72% approval rating on the environment from Democrats was about tied with his 73% approval rating from Democrats on energy for his party's worst evaluation of him in March.

Biden is now including billions in his 2023 federal budget proposal for measures to address climate change. But to earn full credit from fellow Democrats who care deeply about the issue, that spending will need to go through.

Are Americans Concerned About Global Warming?

As the federal government contemplates funding projects intended to mitigate the effects of extreme weather, how concerned are Americans about a warming Earth?