WASHINGTON, D.C. -- While most Western countries have strongly condemned Russia's invasion of Ukraine, the rest of the world hasn't reacted in the same way.

Responses in Africa, for example, have ranged from solidly supporting Ukraine to condemning NATO's response. Gallup surveys in Africa show these actions largely follow a general divide in support for Russia's leadership across the continent before the Ukraine crisis.

However, approval of Russia's leadership remains consistently higher in Africa than the global median of 33%. Africans have held a more positive view of Russia for some time, reaching a peak of 57% approval in 2011, before opinions started declining over the past decade. 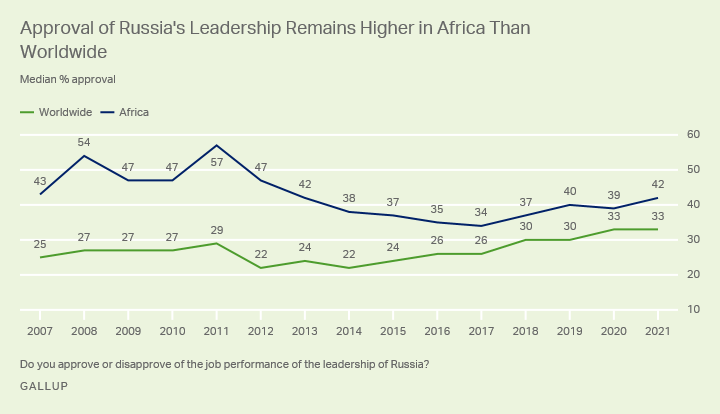 Support for Russian leadership is most strongly concentrated in West Africa, particularly in Mali, where 84% of residents approve. Although Mali has recently received renewed Russian interest, including the arrival of Russian mercenaries to replace outgoing French forces at the behest of the Malian government, Malian support of Russia has been among the highest in sub-Saharan Africa over the past decade.

However, residents of Eastern and Southern African nations are more restrained. While a higher percentage of their populations express support for Russian leadership compared with the global average, this opinion is held by a minority of residents living in the East and South. Large proportions of the population in these nations are also unsure about their views on Russia, particularly in Zambia, where 66% of residents didn't know if they approved or disapproved of Russian leadership in 2021.

While reasons for this support vary, much of it may be tied to recent Russian economic and diplomatic outreaches to the continent. Russian trade has become increasingly enmeshed in Africa over the past two decades, not only in terms of natural resources like wheat, oil and gas, but in military equipment and support as well.

Russia is the largest provider of military arms to sub-Saharan Africa, with exports increasing 23% over the past four years. Some of this has come in the form of direct action as well, with Russian private military contractors deploying to 19 African nations since 2014.

Long-standing Russian history in the region may also play a role in the complex relationships that exist today. The former Soviet Union was a large supporter of anticolonial movements during the Cold War, including anti-apartheid activists in South Africa. This has led to a dichotomy whereby South African President Cyril Ramaphosa blames NATO for the war in Ukraine, yet just 30% of South Africans approve of Russia's leadership.

Most Severe Impacts Are Likely to Come

While the initial fallout from economic sanctions and disruptions in supply chains have already been felt around the world, more substantial effects are likely to emerge in the coming months. Even though the conflict in Ukraine is a world away, sub-Saharan Africa, in particular, is vulnerable to disruptions in food supplies, with a large proportion of the population experiencing food insecurity.

Russia and Ukraine account for 30% of global wheat supplies, with many nations in Africa importing a significant amount from the two countries. Substantial majorities in many African countries report not having enough money to buy food in the past 12 months. The Southern African nations of Zimbabwe and Zambia face an acute risk, with close to four in five residents having difficulty affording food in 2021.

The ongoing conflict in Europe has already produced economic and diplomatic shocks that are being felt worldwide. After these initial disruptions, the full effect of sanctions and diminished exports from both Ukraine and Russia will begin to impact many nations globally, especially those in Africa. Under these additional strains, it remains to be seen what effect the ongoing crisis will have on Africans' views of Russia's leadership.

Results are based on telephone (landline and mobile) and in-person interviews conducted 2006-2021, with random samples of adults, aged 15 and older. For results based on the total samples of national adults, the margin of sampling error ranges from ±2.0 to ±5.5 percentage points at the 95% confidence level. All reported margins of sampling error include computed design effects for weighting. 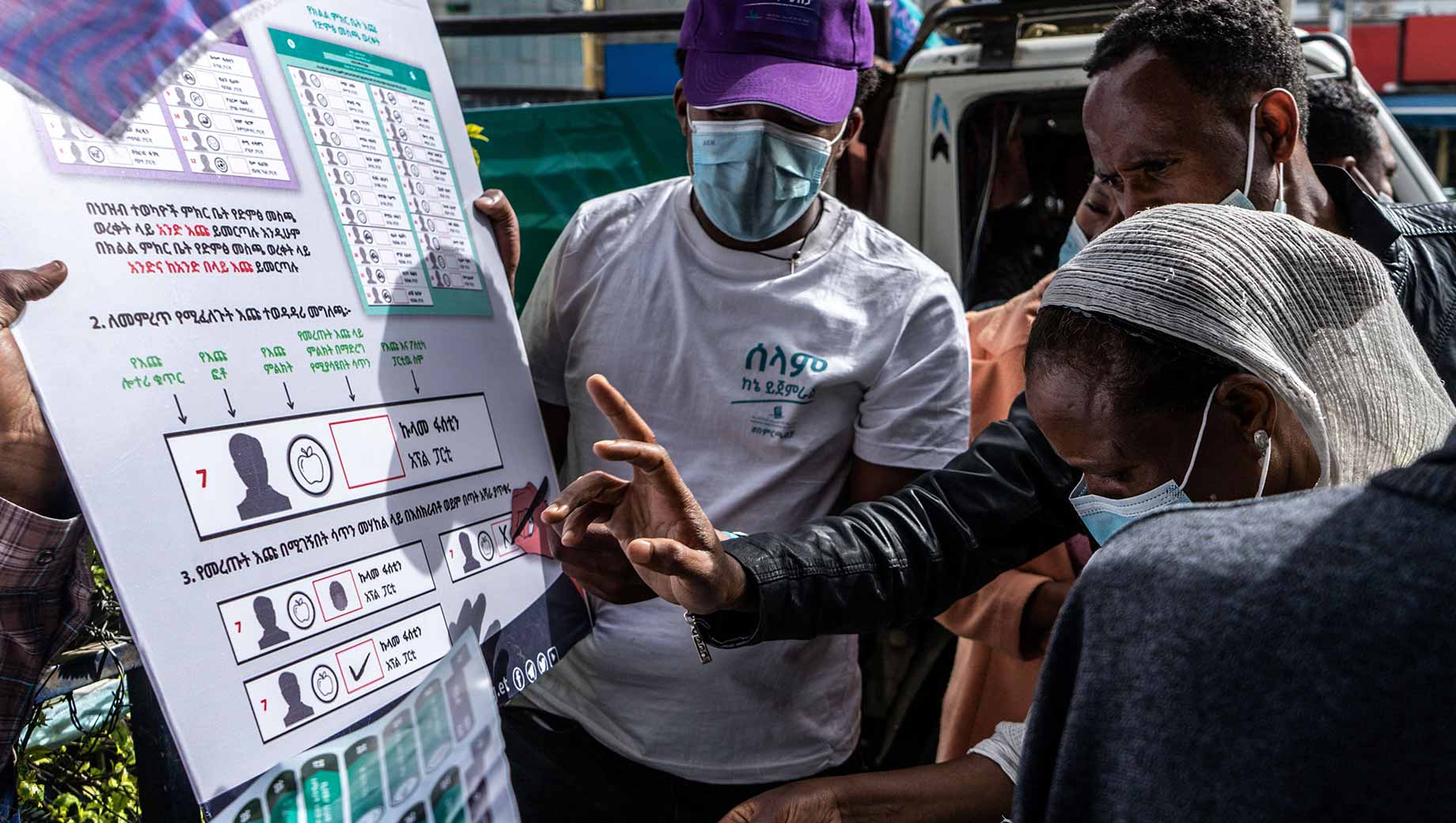 National elections in Ethiopia next week mark a key democratic test in Africa's second-largest country. A majority (55%) say they are confident in the honesty of elections.