WASHINGTON, D.C. -- Sub-Saharan Africa remains one of the least connected places on the planet when it comes to internet access. Gallup surveys show five countries in the region are more connected today than they were before the COVID-19 pandemic, with internet access growing substantially, by 10 percentage points or more, between 2019 and 2021.

Notably, in Nigeria, the largest economy and most populated country on the subcontinent, the 10-point increase translates into over 13 million more adult internet users.

Access Up Most Among Older, Employed and Female South Africans

Internet access rose among all key demographic groups in South Africa from 2019 to 2021. However, the greatest increases -- 20 points or more -- were among those aged 30 and older, women, and South Africans who were employed for an employer.

The increase in access for women -- to 65% -- now puts them near parity with men (67%) for the first time in Gallup's trend for this country. 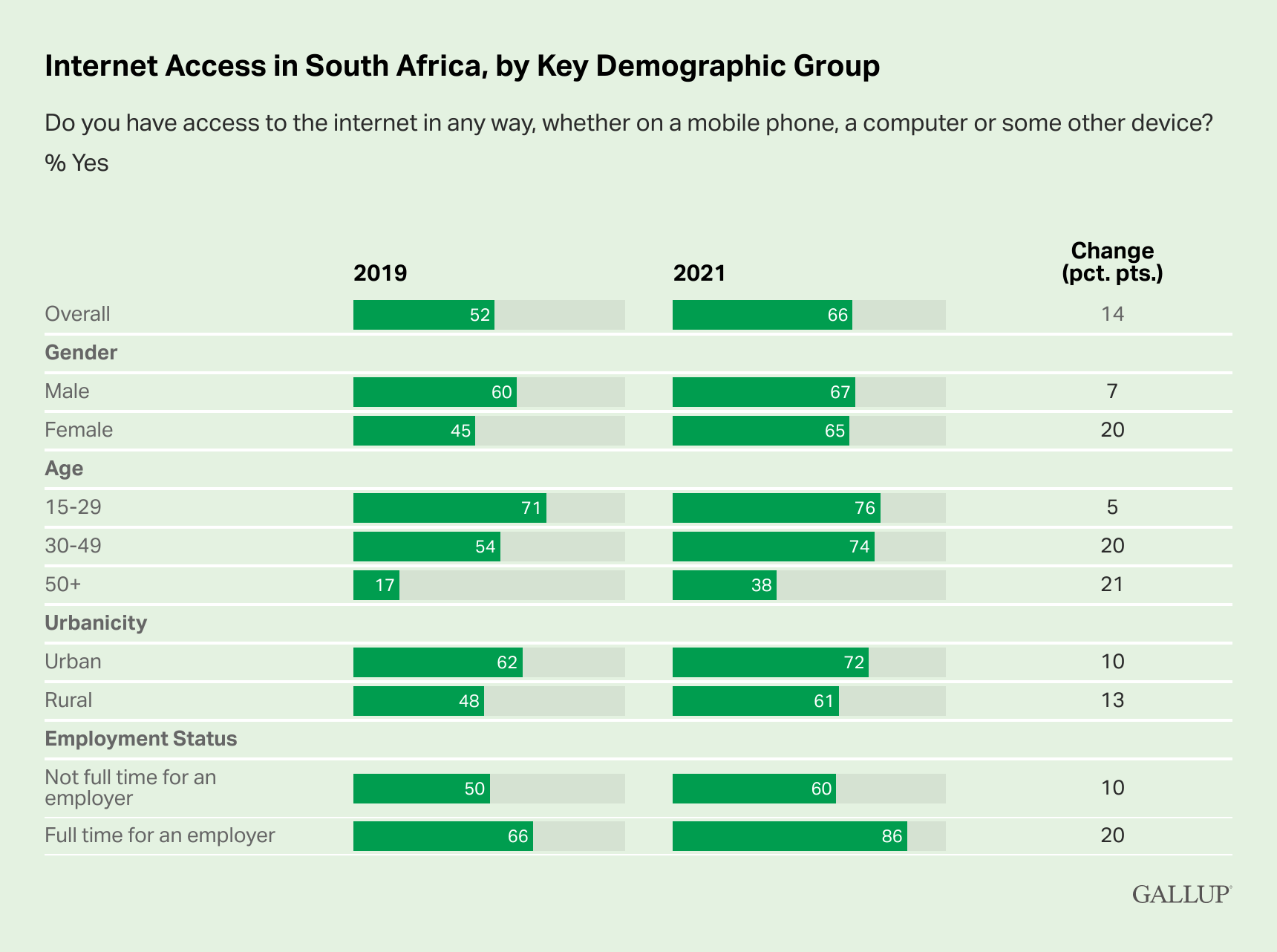 Table. Internet access in South Africa, 2019 and 2021 surveys, by key demographic group, including by gender, age, urbanicity and employment status. Overall access grew from 52% to 66%. The biggest increases in access by group -- at least 20 percentage points -- between 2019 and 2021 in South Africa came among women, those 30 years old and older, and those working full time for an employer. Women in 2021 reached near parity with men in internet access (with about two in three having access), as did those aged 30 to 49 with those 15 to 29 (with about three in four having access).

Internet Access Rises Most for Men and Youth in Nigeria

Increases in internet access have been more uneven among key groups in sub-Saharan Africa's largest economy and most populous country, Nigeria. Young people in the 15 to 29 age group saw the biggest jump, with access up 17 points to 47% in 2021.

Access rose almost as much among Nigerian men, increasing 14 points from 31% to 45% in 2021. There is a substantial gap in access to the internet between Nigerian men and women, 45% versus 27%. For women, the increase of seven points during the period was half that of men. 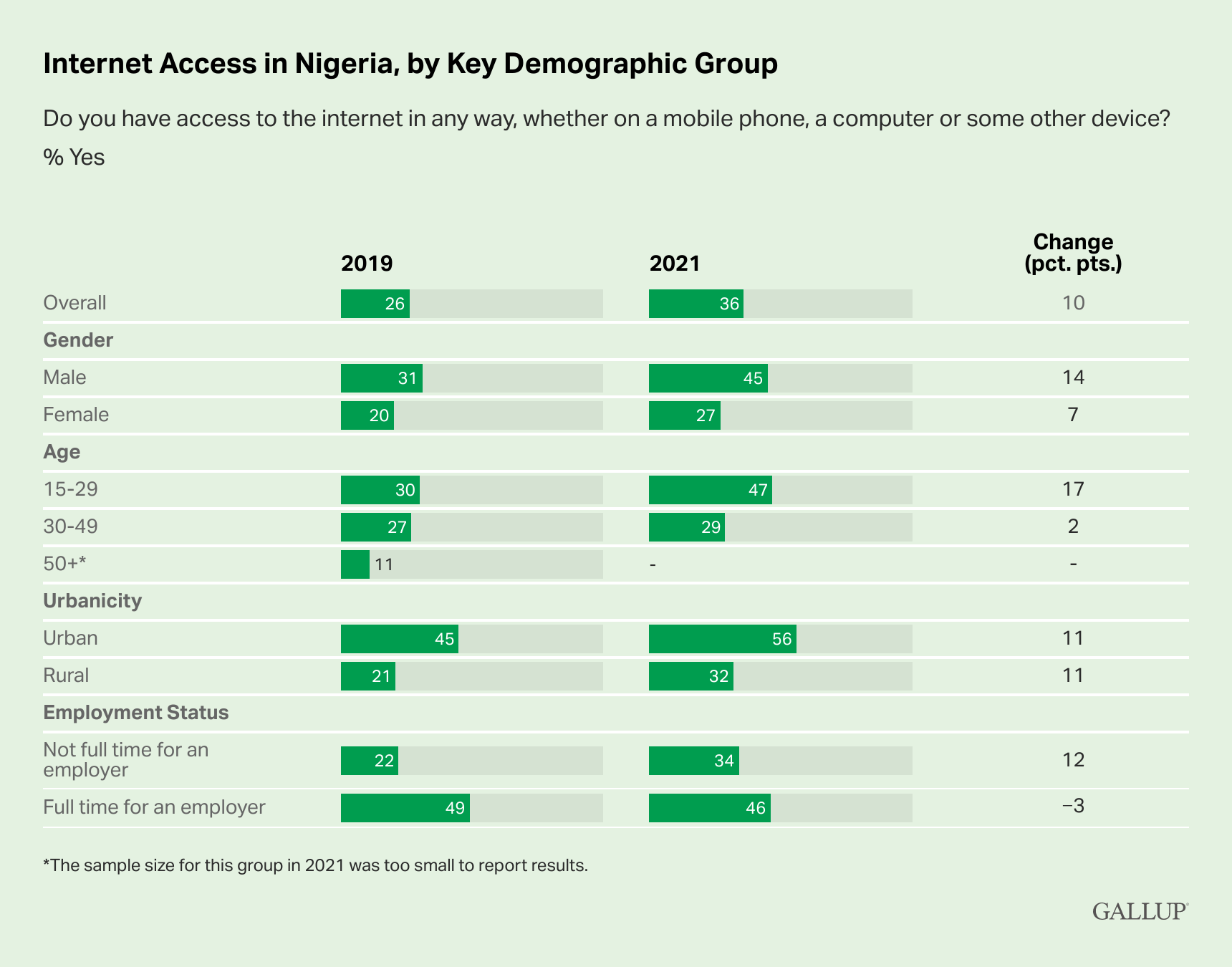 Table. Internet access in Nigeria, 2019 and 2021 surveys, by key demographic group, including by gender, age, urbanicity and employment status. Overall access grew from 26% to 36% during those two years, with the biggest increases coming among men (from 31% to 45% access) and those aged 15 to 29 (from 30% to 47% access). There are disparities in access in all four demographic group categories.

The increased internet access in these five countries may reflect increased investment in telecommunications infrastructure from the public and private sectors.

The World Bank in particular invested $250 million in internet infrastructure across sub-Saharan Africa, with emphasis on South Africa, Nigeria and Kenya in 2021. Other public entities invested in specifically increasing access among underserved communities. And private industry invested $1 billion in increasing access across the continent.

While investment in telecommunications infrastructure has clearly brought dividends in increased internet access for some in the region, there is still substantial room for growth, particularly among key groups where there are still glaring disparities.

Results are based on telephone (landline and mobile) and in-person interviews conducted in 2019 and 2021, with random samples of adults, aged 15 and older. For results based on the total samples of national adults, the margin of sampling error ranges from ±2.3 to ±5.0 percentage points at the 95% confidence level. All reported margins of sampling error include computed design effects for weighting.