Like it or not, cognitive bias may be weakening your company's succession decisions.

Even strategic leaders with rigorous decision-making processes are susceptible to making promotion decisions based on subjective evaluation -- unconsciously rejecting data that do not support their personal feelings. Cognitive biases can compel leaders to make specific, predictable errors when selecting candidates for advancement.

Executives with a status quo bias might choose an internal leadership candidate with average performance over an external applicant with more experience but unknown performance.

Other leaders conform to preconceived notions about candidates -- confirmation bias -- or overestimate the talents of familiar people or people like themselves -- in-group bias. Others believe that a candidate with a series of performance achievements will continue to have future successes -- hot-hand fallacy.

Organizations can mitigate bias and optimize succession planning by understanding a few key factors about cognitive bias and adopting a data-driven approach.

Gallup asked 559 managers how they would respond if a good employee began routinely arriving to work a few minutes late. Only 25% said they would withhold judgment and talk to the person to learn more.

The rest considered the behavior unacceptable and stated they would take immediate corrective action. This is an example of confirmation bias -- trusting your own conclusions and not requiring other data to take action.

Gallup found that the managers who jumped to conclusions were often better performers. Why? In-depth Gallup analytics show that capable managers are highly confident and unafraid to make quick decisions.

2. Cognitive bias convolutes leaders' and managers' views of their own capabilities.

Effective managers may be better at jumping to the right conclusions in some circumstances, but cognitive bias still inflates -- and sometimes deflates -- their sense of their own performance and potential in future jobs. When people don't understand their strengths and weaknesses, they are more likely to think that they can perform well in positions that aren't right for them.

But when leaders become self-aware of their strengths and weaknesses, they can decrease bias toward themselves and in their hiring decisions. They can also recognize the same tendencies in others and address them.

Gallup asked 645 leaders where they would put their best performer if they had two manager-level promotion opportunities with equal upside potential: one loss-making and the second highly profitable.

A majority -- 66% -- said they would put their best leader in the loss-making opportunity, while 34% would assign their top candidate to the profitable position. These decisions are evidence of loss aversion bias, or the tendency to prefer avoiding losses to reaping similar gains.

These percentages change when considering leadership performance. High-performing leaders went against the grain by saying that they would assign their best person to the more profitable opportunity. This is a data-driven decision because research shows that overall return on investment tends to be higher when a company's best managers are in profitable assignments where they can deliver better results, faster.

These examples suggest that exceptional leaders rely on data to make decisions, not gut feelings.

But some leaders do not have the right analytics to make informed succession decisions. Without rigorous data about candidates' ability to perform, leaders cannot make analytics-based decisions that boost business outcomes.

How to Reduce Bias and Create a Succession Plan That Works

Organizations can circumvent bias through targeted interventions and data-driven processes.

Here are two overarching guidelines for leaders and managers to create a succession plan that works:

Organizations should use predictive analytics and proven metrics to hire and promote people who are most likely to excel. An analytics-based approach is an investment that pays dividends: Organizations that select the top 20% of candidates have been found to achieve 30% higher profitability.

Accountability is essential for preventing groupthink. When reviewing candidates, teams should actively seek -- and genuinely consider -- disconfirming evidence. Diverse opinions from other functions, customers and partners can lend a fresh perspective and expose blind spots.

Leaders and managers should frequently check themselves and one another for signs of bias. Team members should always encourage the use of data to explore candidates' potential.

Cognitive bias is inherent in human thinking and often unavoidable.

But if you're looking for succession planning that leads to business outcomes, your organization must rely on evidence, not personal perceptions. With a data-driven approach, you can develop a pipeline of excellence.

Learn how to reduce your company's bias when making succession and promotion decisions:

Bailey Nelson contributed to this article.

Identify, select and develop your future leaders.
Gallup helps you identify your next-in-line leaders and turn potential into performance.

Build your leadership bench. Create a data-driven succession plan that identifies future leaders and starts them on a powerful development path. 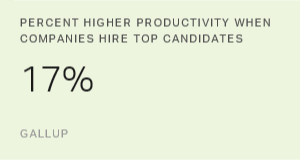 Manager Bias in Hiring: The Fix

3 Reasons Why Performance Development Wins in the Workplace

Learn how committing to a performance development approach can arm your managers to lead their employees and teams to greater outcomes.

How to use coaching to develop the natural talents of your future leaders.