A new study conducted by researchers from Harvard and Stanford found that the amount of life lost to a stressful work situation varies significantly by race, ethnicity, education level and gender. They found that in some parts of the U.S., those with less education and lower incomes have up to a 30% difference in life expectancy compared with those with more education and higher incomes.

The study authors note that people with lower incomes and less education may have lower life expectancies, likely attributable to less access to healthcare, exposure to pollution, inadequate early life nutrition and healthcare, and health habits such as minimal exercise, a poor diet and smoking. They suggest several policy-oriented variables that workplaces can adjust to achieve healthier work environments for those with less education, including managing hours worked, shift work, health insurance and paid time off.

While workplace policies and benefits are important, workplace leaders should not ignore the substantial effect the work environment can have on health and well-being.

One possible reason for these differences in health outcomes is that engaged workers are 28% more likely than their actively disengaged peers to get involved in company-sponsored wellness programs. Employers who take a holistic approach to their workers' well-being -- that is, they focus on employees' purpose, social, financial, community and physical well-being -- have an even greater chance for success with health outcomes.

Although policies and benefits relate to employee well-being, the work environment and whether it is engaging or disengaging dwarfs the effect of the policies alone. Gallup research finds that employees with the exact same benefits have different levels of overall well-being, depending on the nature of the work environment. For example, regardless of the number of hours worked, vacation time taken, or the existence of a flextime policy, engaged workers have higher well-being than their disengaged colleagues. In an extreme scenario, disengaged workers with six weeks of annual vacation time had lower well-being than engaged workers with one week of vacation.

When it comes to improving workplace health, policies are important, but insufficient. No policy replaces having a great manager and fulfilling work. 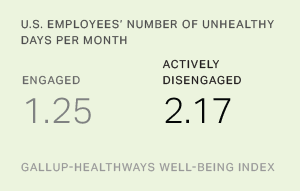 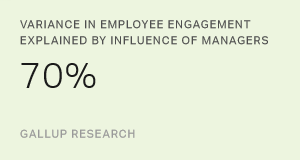 Twitter's internal analysis recently concluded that its CEO was the "primary driver of engagement" at the company. Is this true for businesses in general?

Your Boss Could Be Bad -- or Good -- for Your Heart

A new study finds workers who work in mistrustful environments are more likely to be at risk for seven cardiovascular disease risk factors.