WASHINGTON, D.C. -- As Republican leaders in Washington lean on Democrats to approve the U.S.-Mexico-Canada Trade Agreement (USMCTA), a review of recent Gallup data on trade provides insights into the public opinion backdrop.

Here are more details on these essential points.

Gallup has not asked Americans explicitly whether they agree with an "America First" approach to trade, but less than a month into Trump's presidency, in February 2017, 71% of Americans rated "promoting favorable trade policies for the U.S. in foreign markets" as a "very important" U.S. foreign policy goal.

In that survey, promoting favorable trade policies ranked fourth in importance to Americans out of eight possible foreign policy goals. It was slightly behind securing U.S. energy supplies (80% very important) and preventing either the spread of nuclear weapons (84%) or future acts of terrorism (85%). It ranked ahead of defending U.S. allies' security (66%), working with the U.N. to achieve world cooperation (63%), and promoting human rights (53%) or building democracy (29%) in other countries.

In other words, Americans value favorable trade deals on par with preserving national security, and prioritize it over international rights and cooperation.

Underscoring this finding, a January 2017 Gallup poll conducted shortly before Trump took office found the president-elect holding something of a mandate to renegotiate U.S. trade deals. In the poll, Gallup tested a number of promises Trump made during the 2016 campaign, asking respondents how important it was that he keep each as president.

Most Americans thought it was "very" or "somewhat" important that Trump keep each of his three major promises on trade, with an outright majority saying one of them was very important:

Bipartisan Consensus Has Emerged That Foreign Trade is Good

Americans' broad view of trade is the most positive it has been in more than a quarter-century. As of February 2019, nearly three in four U.S. adults (74%) believe trade represents "an opportunity for economic growth through increased U.S. exports." Barely one in five (21%) see trade as more of "a threat to the economy from foreign imports." Changes in Americans' sentiment on trade have largely followed U.S. economic conditions. In 1992, more Americans saw trade as a threat than an opportunity, as consumers were still recovering from the 1990-1991 recession. By 1994, the economy was doing well, and the majority saw trade as an opportunity. Perceptions shifted again in 2005 as the economy slowed and entered an 18-month recession in late 2007, but they have since grown increasingly positive.

The relationship between Americans' perceptions of trade and U.S. economic conditions has been particularly strong since 2011. As the unemployment rate declined from over 9% in January 2011 to 4.0% in January 2019, the percentage of Americans perceiving trade as a threat from imports dropped by more than half, from 45% to 21%.

Both Republicans and Democrats have become more positive about trade over this period of improving economic conditions. However, support for trade among both groups jumped sharply after Trump took office in 2017. Most Americans today believe trade is beneficial to several key aspects of the economy -- particularly innovation and economic growth. Americans are the least positive about the effect trade has on the availability of jobs for U.S. workers. Still, the slight majority say U.S. trade with other countries has a mostly positive effect on jobs for U.S. workers.

Republicans and Democrats largely agree about the impact that trade has in all six areas.

In Gallup polling from 1997 to 2004, Republicans and Democrats were in close agreement on NAFTA, with less than half of either group viewing it as good policy for the U.S. In Gallup's next measurement in 2017, however, Democratic support had soared to 67% while Republican support had sunk to 22%.

The long interlude between Gallup's 2004 and 2017 readings makes it impossible to pinpoint when the shift occurred or why; however, today's partisan gap makes sense in the context of Trump's harsh criticism of NAFTA.

Whatever the reason, the broad support of Democrats nationally for NAFTA could be affecting Democratic leaders' current willingness to approve the USMCTA, the Trump administration's replacement for NAFTA. Americans Neither Enthusiastic Nor Alarmed About U.S.-China Trade War

On the one hand, twice as many Americans in June 2018 said that China engages in unfair rather than fair trade with the U.S. -- 62% vs. 30% -- by far the worst rating given to any U.S. trading partner.

On the other hand, Americans haven't embraced Trump's tough stance on trade. More Americans in July 2018 thought the tariffs imposed by the U.S. and China on each other after stalled trade talks would be more harmful than helpful to the U.S. economy in the long term, with 45% saying this. However, respondents' expectations for the impact on their own finances and those of their employer were less negative, with close to half saying the tariffs would have no effect.

Trump may be in sync with Americans when he expresses the strong desire to renegotiate trade deals so they are more favorable to U.S. interests, but with the USCMTA hung up in Congress, he lacks a major legislative success in this arena. His criticism of China's trade practices may meet with approval from the majority of Americans who consider China an unfair trading partner, but his strategy of raising tariffs on Chinese imports -- which has prompted China to issue countertariffs on U.S. products -- was not particularly reassuring to Americans.

The net effect of Trump's pluses and minuses on trade is that his approval rating for how he is handling foreign trade tracks closely with his overall job rating. For instance, when last measured in February, Trump earned 43% job approval on trade, vs. 45% overall. That contrasts with the 56% he earned on the economy generally.

Trump's overall job approval rating is even lower today, at 39%, most likely meaning his rating on trade is also down and only reducing what political leverage he might have with reluctant Democrats on Capitol Hill over the USCMTA. 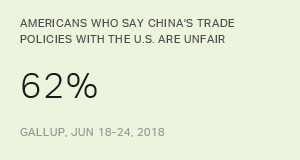 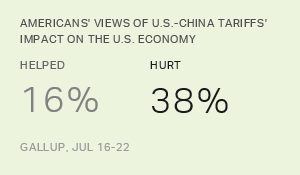 Americans are more negative than positive about the impact that U.S.-China tariffs have had on themselves and the U.S. economy so far.

Presidential Candidates and Public Opinion About the Economy

Americans' generally positive views of the U.S. economy are posing a challenge to Democratic presidential candidates.