Despite hopes that food security -- which suffered major setbacks in 2020 -- would start to recover in 2021, the latest State of Food Security and Nutrition in the World report (SOFI) shows that 2021 brought further setbacks.

World hunger and severe food insecurity grew, making the world's goal of achieving "zero hunger" by 2030 even more unlikely. In fact, according to current projections from the Food and Agriculture Organization of the United Nations (FAO), 8% of the world's population will still be undernourished in 2030 -- just as much as when these goals were first set in 2015.

The report released in July draws on data from many sources, including food security data collected for the FAO in the Gallup World Poll*, to provide the latest update on the world's progress toward ending hunger and ensuring food security in the second full year of the pandemic.

Although the pace slowed, the proportion of people facing hunger continued to rise in 2021.

After remaining basically unchanged for five years, the prevalence of undernourishment** -- the FAO's traditional indicator of the extent of hunger -- increased from 8.0% to 9.3% between 2019 and 2020. It kept rising in 2021, although at a slower pace than the year before, reaching 9.8%. 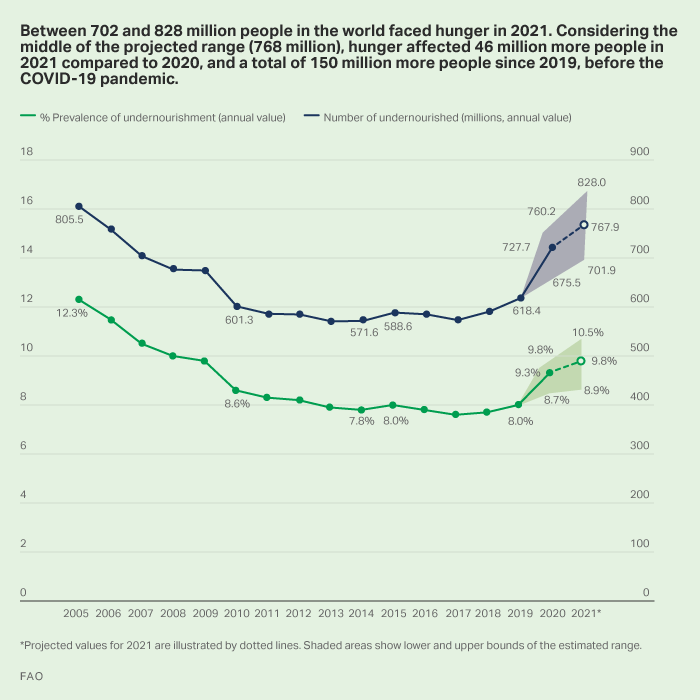 Hunger continued to increase in most regions of the world. As a share of its population, Africa continued to bear most of the burden, with one in five people -- or an estimated 278 million -- facing hunger in 2021. However, more than half of the people in the world affected by hunger in 2021 -- 425 million -- live in Asia.

The war in Ukraine could make hunger worse for millions.

The war in Ukraine, which involves two of the world's biggest producers in agriculture and staple cereals, could drive hunger numbers even higher in the short and medium term.

FAO simulations suggest that in a severe-shock scenario, 13 million more people could be undernourished in 2022 -- and reach as high as 19 million more in 2023. Populations already facing hunger and food crises -- in sub-Saharan Africa, the Near East and North Africa -- are most at risk of higher undernourishment. 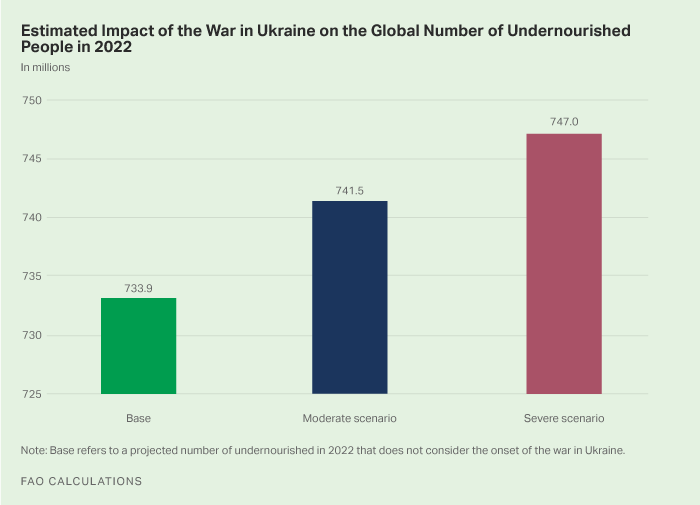 Just eight years away from 2030, the latest SOFI report shows the world continues to be headed in the wrong direction in its fight to end world hunger, food insecurity and malnutrition. Although the pace in the increase in hunger slowed in 2021, it continued to rise, and hunger affected tens of millions more people than it did the year before.

The increase in global hunger in 2021 reflects the lingering effects of the COVID-19 pandemic and the unequal pattern of economic recovery that took place last year. Many of the people most affected by the pandemic did not recover the incomes that they lost, which exacerbated existing inequalities and made food security situations worse for populations that were already struggling before the pandemic.

Finding a path forward in these challenging and uncertain times -- as food prices rise and recession looms -- will require governments to start rethinking how they allocate their funding and use the resources they already have to fight hunger.

Sara Viviani is a member of the FAO's Voices of the Hungry project team.

Anne Kepple contributed to this article.

* The data for the FAO's Food Insecurity Experience Scale (FIES) are collected directly from respondents to surveys, including the Gallup World Poll and other sources.