WASHINGTON, D.C. -- Americans' desire to lose weight does not necessarily translate into their doing anything to achieve it. While 51% of adults want to lose weight, barely half as many (25%) say they are seriously working toward that goal. This discrepancy between Americans' weight-loss desires and behavior has existed for years. 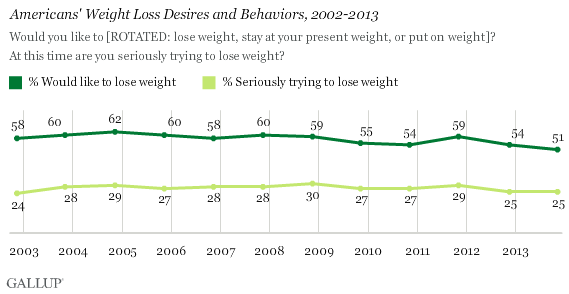 These results are based on Gallup's annual Health and Healthcare survey, conducted Nov. 7-10 this year. Gallup has asked Americans to report their attitudes toward their weight and their current weight situation yearly since 2002 and occasionally before then.

Americans' desire to lose weight has not kept up with the rise in adults' self-reported weight over the past 23 years. Americans report weighing an average of 15 pounds more now than in 1990, but the percentage who want to lose weight is the same now as it was then. 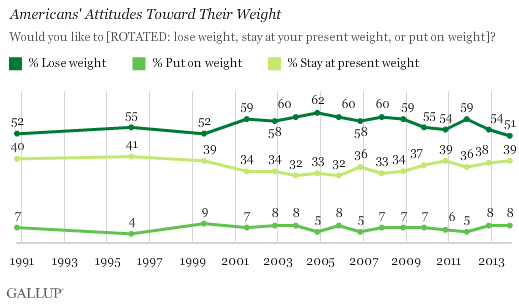 Women (57%) are more likely than men (46%) to say they want to lose weight, consistent with what Gallup has found historically. But the gender gap is smaller in the percentages who are making an effort: 27% of women vs. 22% of men.

More Than One-Third of Americans Classify Themselves as Overweight 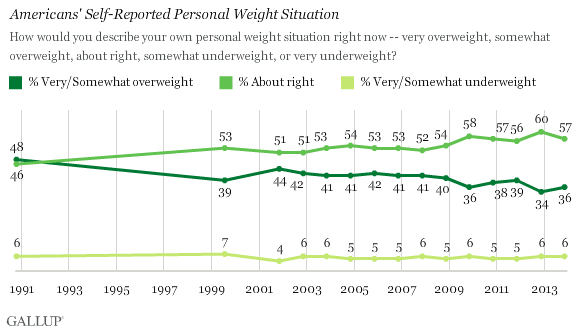 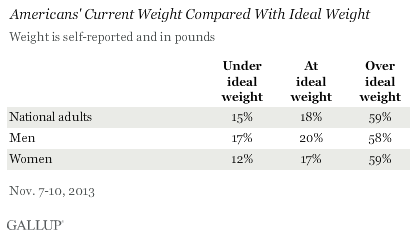 Women, on average, weigh 157 lbs., but would like to weigh 139 lbs. Men tip the scale at 195 lbs., on average, but would like to weigh 182 lbs. The difference between the actual and ideal weight is larger among women than among men, 18 lbs. vs. 13 lbs., as has been the case historically. Women may face more societal pressure than men to have a lower ideal weight, or may have more weight to lose. 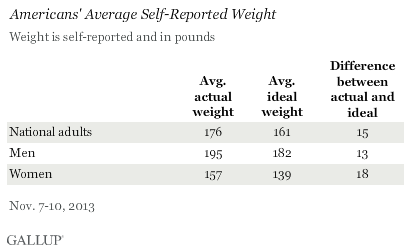 Americans are significantly more likely to want to lose weight than to be currently trying to achieve that goal. Separately, Gallup has found that the obesity rate in 2013 is on track to be the highest since Gallup and Healthways began Daily tracking in 2008, and Americans think obesity is a more serious problem than alcohol and smoking. Given these concerns, it is perhaps surprising that the percentages of adults who say they want to lose weight and who are seriously trying to do so have not significantly increased in recent years.

It is possible that some Americans who are overweight but not seriously trying to lose weight lack the motivation needed to consistently practice healthy behaviors. Gallup's previous research shows that Americans' eating habits are worsening in 2013, and fewer adults reported exercising frequently in the first half of the year. Additionally, Americans continue to frequent fast-food restaurants and do not pay much attention to restaurant nutrition information. If these trends continue, it does not bode well for the possibility that more Americans will make a serious effort to lose weight.

Another explanation may be that some Americans realize they are overweight, but only by a few pounds. Consequently, they may not see it as a major issue that requires corrective action. Employers can assume an important role in educating workers about strategies to achieve and maintain a healthy weight. Losses in productivity attributable to workers' being above a normal weight or having chronic conditions are substantial, so employers that focus on their workers' physical well-being could reap the double benefit of a healthier workforce and cost savings.

While most Americans, particularly those who say they are overweight, say their doctor usually discusses the benefits of healthy habits with them, physicians may need to be more direct in their conversations with patients about reaching a healthy weight. The American Medical Association classified obesity as a disease earlier this year, which may prompt more physicians to speak with patients about their weight.

For results based on the sample of 562 men, the margin of sampling error is ±5 percentage points at the 95% confidence level.

For results based on the sample of 477 women, the margin of sampling error is ±6 percentage points at the 95% confidence level.