WASHINGTON, D.C. -- Gallup's Job Creation Index registered +19 in January, unchanged from the prior month. This score is a three-point improvement from January 2013 and is on par with the overall 2013 average of +20. 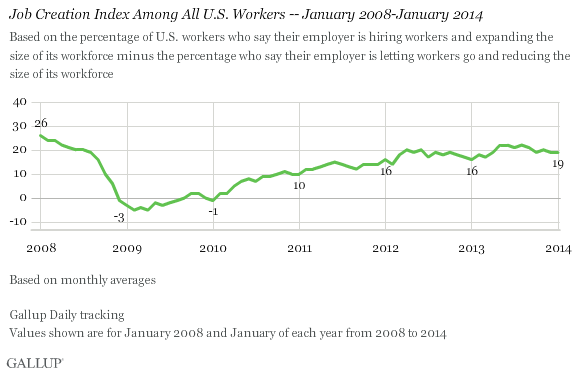 The index is a measure of net hiring in the U.S., based on a nationally representative sample of more than 17,000 full- and part-time workers. The index for January reflects the difference between the 35% of Americans who said their employer is hiring workers and expanding its workforce and the 16% of workers who said their employer is letting workers go and reducing the size of its workforce. 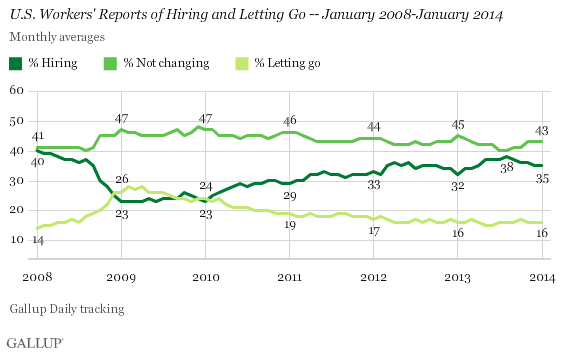 Government workers' reports of net hiring declined two points in January from December 2013, but that change is not statistically significant. January's score of +8 is an improvement from January 2013's +4 score and is three points higher than the overall 2013 monthly average of +5. From a broader perspective, 2013 was the first year since Gallup began measuring hiring monthly in 2008 that the average index for the government was in positive territory. 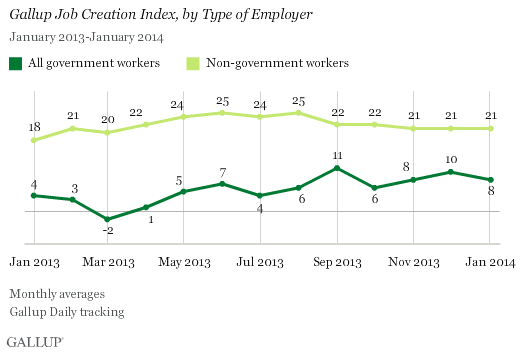 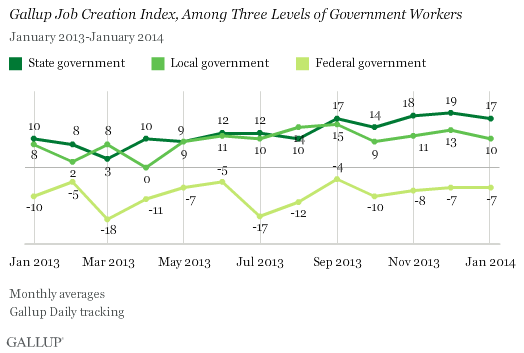 Gallup's Job Creation Index has improved since the depths of the 2008-2009 recession, but it has leveled off in recent months. The index still has not returned to levels found in early 2008.

Hiring in the private sector remains much stronger than in the government sector, and the federal government in particular has the worst hiring situation. The recent bipartisan budget deal seeks to relax some of the damaging cuts of sequestration, with Congressional Budget Office projections showing federal outlays increasing by roughly 3% in 2014. This may contribute to better hiring conditions in the federal government in the near future.

Results for this Gallup poll are based on telephone interviews conducted Jan. 2-31, 2014, on the Gallup Daily tracking survey, with a random sample of 17,484 adults, aged 18 and older, who are employed full or part time, living in all 50 U.S. states and the District of Columbia.