PRINCETON, NJ -- Half as many Americans view Iran as the United States' greatest enemy today as did two years ago. As a result, China now edges out Iran and North Korea atop the list. 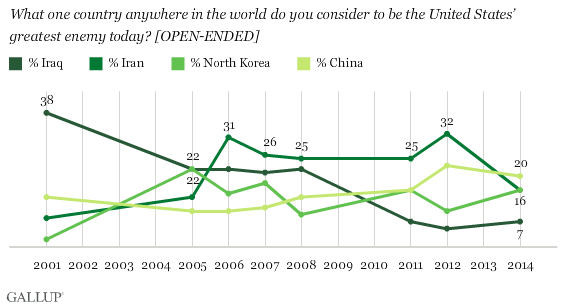 Gallup first asked this open-ended question in 2001, and opinions have shifted over that time. In the 2001 survey -- 10 years after the Persian Gulf War but before the 2003 Iraq war began -- Americans named Iraq as the greatest U.S. enemy by a large margin.

By 2005, with the U.S. nearly two years into the Iraq war, Iraq and North Korea tied as the greatest enemy, with 22% mentioning each country. The next year, Iran surged to the top of the list, with 31% of all mentions, and it remained the most often cited enemy until this year.

The drop in mentions of Iran as the greatest enemy in this year's poll has been accompanied by increases in the percentages mentioning North Korea (from 10% in 2012 to 16%), Russia (from 2% to 9%), and Syria (from less than 1% to 3%). The percentage mentioning China, however, has stayed virtually the same. Thus, China now tops the list mainly because Americans' views on the nation's enemies are more divided among several countries rather than focused on one dominant country, as in recent years.

Iran reached an agreement last November with several of the world's largest nations, including the United States, to limit its nuclear activity. Those nations in return agreed to ease some of the sanctions on Iran. That agreement may be the main reason the American public is taking a less antagonistic view of Iran.

This week, Iran and the same countries agreed to a framework for continued negotiations toward a comprehensive agreement on Iran's nuclear capabilities.

Importantly, although Americans are less likely to regard Iran as the greatest U.S. enemy, their basic favorable and unfavorable opinions of Iran have improved only slightly this year, and remain overwhelmingly negative.

Key Subgroups' Perceptions of the Nation's Greatest Enemy Are Similar

Americans in all major subgroups are less likely now than in 2012 to name Iran as the United States' greatest enemy. Groups that were among the most likely to view Iran as the top enemy, such as men, older Americans, and college graduates, tend to show the greatest declines. 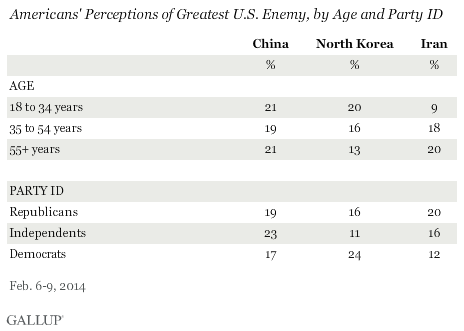 Americans' perceptions of the United States' greatest enemy have varied over time, usually in response to developments on the world stage. As such, the sharp drop in their likelihood of naming Iran as the United States' top enemy is probably tied to Iran's continued willingness to agree to international limitations on its nuclear capabilities.

However, Iran's reluctance to agree to limitations in the past has made U.S. and world leaders cautious about whether Iran will uphold its end of any agreement. Indeed, the Senate is preparing a measure to impose new sanctions on Iran if it does not curtail its nuclear program.

With fewer Americans currently regarding Iran as the greatest enemy, China now tops the list, ranking just slightly ahead of Iran and North Korea. Americans in general view China much more positively than Iran, though on balance, still negatively. They may regard China's emerging economic power to be as threatening, if not more so, than the potential military threats from Iran and North Korea.