The Food and Drug Administration proposed regulations in April 2014 that would extend its tobacco authority to cover e-cigarettes. These regulations, which include banning sales to minors and requiring warning labels, have not yet been implemented.

In the absence of federal regulations, some state and local governments have passed laws and policies regulating e-cigarettes. Forty-eight states prohibit sales of electronic cigarettes to minors, as of December 2015. Seven states include e-cigarettes in their definitions of "tobacco products" in state statutes, as of May 2015. Fifteen states have at least one restriction on where e-cigarettes can be used. Not surprisingly, regular and e-cigarette smokers are much less supportive of total bans.

Research into how e-cigarettes affect people's health and the public in general provides mixed results, with some researchers hailing it as a next-generation method of tobacco cessation, while others see it as a gateway to tobacco use. It is also unclear whether e-cigarettes have their own harmful health effects. With the growth of e-cigarette use being a relatively recent phenomenon, it may take some time before researchers reach a consensus on the effect e-cigarettes have on personal, public and environmental health.

Gallup and Healthways will publish additional research this month on e-cigarette usage. 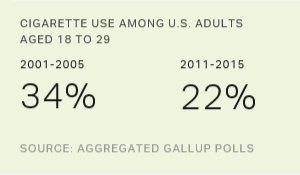