WASHINGTON, D.C. -- As Venezuela edged closer to collapse in 2015, the country's score on Gallup's Law and Order Index -- its annual global gauge of people's sense of security -- dropped to a new record low of 35 out of 100. This score was not only the worst in the world last year, but it was also the worst Gallup has recorded for any country in the past decade. In 2015, Law and Order Index scores ranged from a high of 93 in Singapore -- which also led the world on this metric in 2013 and 2014 -- to the low of 35 in Venezuela. The index is based on people's reported confidence in their local police, feelings of personal safety and incidence of theft. The higher the score on the index, the higher the proportion of the population that reports feeling safe. Results for all countries are available in the 2016 Global Law and Order Report.

Venezuela is not a stranger to the bottom of the list. The country posted the lowest score in the world in 2013 and the second-worst score in the world in 2014 before earning the worst score in 2015 as the country veered toward economic and political collapse. Venezuela's score tumbled as just 14% of residents said they felt safe walking alone at night where they live and an only slightly higher 19% expressed confidence in their police. Both percentages are not only new lows for Venezuela, but they are also the lowest scores Gallup has measured worldwide since 2005.

The 14% of Venezuelans who said they felt safe walking alone at night may be a new record low; however, the country has ranked at or near the bottom of the "feel safe" list since 2009. But to put Venezuela's spiral into chaos and violence into perspective, the next-lowest percentages in the world in 2015 were in war-torn Afghanistan (32%) and Syria (32%).

Latin America Still the Least Secure Region in the World

For the seventh year in a row, residents of Latin America and the Caribbean in 2015 were the least likely to feel secure in their communities. The region scored a 55 on Gallup's Law and Order Index -- unchanged from its score in 2014. Residents of Southeast Asia, the U.S. and Canada, Europe, and East Asia were again the most likely to feel secure, with index scores of 77 or higher.

With a higher average homicide rate than in any other region for the past decade and situations deteriorating in several countries, it is not surprising that the poor personal security situation in Latin America and the Caribbean has failed to improve in most countries. In 2015, all countries in the region had index scores below the global Law and Order Index average of 72.

The largest declines in the region took place in El Salvador -- which now posts the second-lowest Law and Order Index score in the world ahead of Venezuela -- and in Venezuela. The eight-point drop in El Salvador's score between 2014 and 2015 coincided with a 70% spike in violent deaths that ranked it as the most violent country in the world last year. Venezuela -- where scores dropped seven points in one year -- ranked as the second-most murderous country in the world in 2015.

Venezuela's ranking as the least secure country in the world in 2015 -- at least in the eyes of its citizens -- reflects people's growing sense of insecurity and overall lack of confidence in the police to protect them as the situation around them goes from bad to worse. The crime situation in Venezuela was not born out of the current crisis, but it compounds it because high crime rates negatively affect economic performance. This will make it tougher for the country to find its way out of the current crisis. Further, Venezuela is not the only country in Latin America and the Caribbean at risk. The chaos there may also pose a security threat to the broader region where residents do not feel overly secure to begin with, but where there has been progress in other areas of development.

Get the full results for the world in the 2016 Global Law and Order Report.

Results are based on telephone and face-to-face interviews with approximately 1,000 adults, aged 15 and older, conducted throughout 2015 in 133 countries. For results based on the total sample of national adults, the margin of sampling error ranged from ±2.1 percentage points to ±5.6 percentage points at the 95% confidence level. All reported margins of sampling error include computed design effects for weighting. 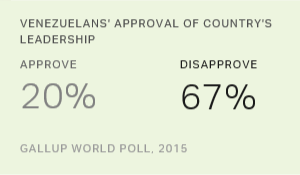 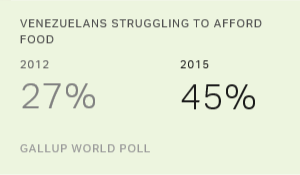