WASHINGTON, D.C. -- Americans remained slightly optimistic about the state of the economy last week, with Gallup's U.S. Economic Confidence Index averaging +3 for the week ending July 9. While this is up three points from the previous week of June 26-July 2, last week's score is on par with the index's performance throughout May and June. U.S. employers added 222,000 jobs in June, according to the Bureau of Labor Statistics, exceeding most economists' expectations. The most recent BLS jobs report had no immediate effect on economic confidence; Gallup's U.S. Economic Confidence Index stood at +3 before the report was released on Friday and in the first three days after.

Since the first week of May, the index has remained in a tight range of +2 to +4, apart from a slightly lower score of zero last week, which appears to have been a short-term dip.

Taking a broader view, Americans remain far more confident in the economy than they were throughout most of 2008-2016.

For the week ending July 9, 34% of Americans assessed the economy as "excellent" or "good," while 23% said it was "poor," yielding a current conditions component score of +11.

Last week, slightly more Americans continued to say the economy was "getting worse" than to say it was "getting better," at 49% and 44%, respectively. This leaves the economic outlook component at -5 for the week. While both components are down from their record highs in March, the economic outlook component has fallen further than the current conditions score. Perceptions about the direction of the economy have been net-negative for 10 consecutive weeks. Ratings of the economy's current conditions, by contrast, remain positive, as they have throughout 2017. For overall confidence in the economy to improve significantly, Americans will need to reassess their economic expectations.

Results for this Gallup poll are based on telephone interviews conducted July 3-9, 2017, on the Gallup U.S. Daily survey, with a random sample of 3,045 adults, aged 18 and older, living in all 50 U.S. states and the District of Columbia. For results based on the total sample of national adults, the margin of sampling error is ±2 percentage points at the 95% confidence level. All reported margins of sampling error include computed design effects for weighting. 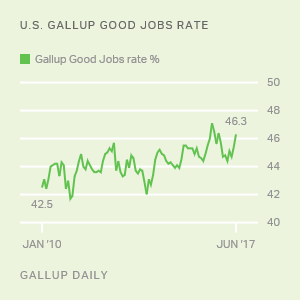 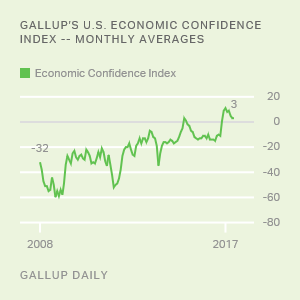 Americans' Confidence in Economy Remains at Low for the Year 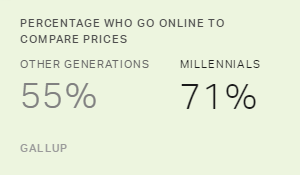