skip to main content
Wellbeing
In U.S., Majority of Smokers Feel Discriminated Against

Thirteen percent of smokers say they feel discrimination every day, while only a fraction of self-described overweight people (1%) say they are discriminated against daily. These results come from a July 5-9 Gallup poll on Americans' consumption habits.

Discrimination against smokers can take many forms. According to news reports, smokers often say they are discriminated against through smoking bans, including more recent bans at some parks and beaches, higher insurance rates, and not getting jobs because of their habit. Analysis of income patterns has shown smokers earn less than those who do not smoke, although this difference could result from smokers tending to have lower average levels of education than nonsmokers.

Gallup asked overweight Americans about perceived discrimination one other time, in July 2003. The current results are virtually unchanged from the 82% of overweight in the U.S. who expressed this same sentiment in 2003.

Fast Company quotes those who are overweight as saying they have faced discrimination because of hiring practices or not getting salary raises and promotions. Others have pointed to bullying and peer pressure while growing up, though most Americans who are overweight say they are never discriminated against in public life or their workplace.

As the smoking rate continues to drop -- 17% of Americans in Gallup's July survey say they smoke -- fewer U.S. adults may potentially be subject to anti-smoking discrimination. But current smokers say they are discriminated against, with 13% saying they face discrimination daily. While there are smokers' rights groups in the U.S. fighting against discrimination, Gallup has found that the economic cost of smoking is significant.

In that same Gallup survey, adults who are overweight are calculated to accumulate about $378 more per person each year in healthcare costs than those who are not overweight, while those who are technically obese have $1,580 more in costs per person every year. Not as many overweight Americans feel discriminated against, but one in six do.

Both behaviors have health costs and clearly a stigma associated with each. There are fewer smokers than people who are overweight, but smokers are more likely to feel the brunt of this stigma. 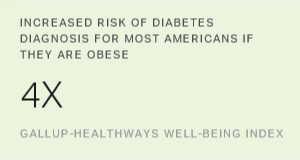 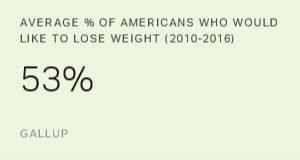 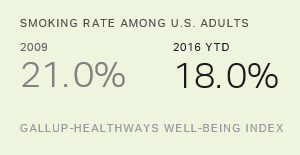