WASHINGTON, D.C. -- In 2017, Gallup and Sharecare continued to track and analyze the factors that contribute to higher well-being for Americans, with more than 2.6 million interviews completed since 2008. The Gallup-Sharecare Well-Being Index encompasses more than just physical health and economic indicators. It measures how Americans feel about and experience their daily lives across five elements of well-being: purpose, social, financial, community and physical.

The following are Gallup editors' picks for the most important health and well-being findings reported this year.

Americans' well-being declines in 2017: After increasing in 2015 and 2016, the Gallup-Sharecare Well-Being Index score dropped in 2017. The overall decline was driven by worsening emotional health, social well-being and purpose well-being. Minorities, women, low-income Americans and Democrats experienced the largest declines in well-being.

U.S. uninsured rate rises: As the GOP attempted to repeal and replace Obamacare, the percentage of U.S. adults without health insurance increased. The uninsured rate rose to 12.3% in the third quarter of 2017 -- the highest recorded since the end of 2014 -- up from a record low of 10.9% in the second half of 2016. The 1.4-percentage-point increase since the end of 2016 represents nearly 3.5 million Americans who have entered the ranks of the uninsured.

Large cities top small towns and rural areas in well-being: Residents of highly populated communities score higher on the Gallup-Sharecare Well-Being Index than their counterparts in less populated areas. This is mostly because those in large communities have higher physical well-being scores. However, rural and smaller communities have advantages in purpose and community well-being.

Older Americans get greatest emotional benefit from exercise: Although regular exercise has emotional health benefits for all age groups, those aged 45 and older benefit most. Seniors aged 65 and older who exercise increase their odds of having a positive life outlook by 32%.

Obesity quadruples the risk of diabetes for most U.S. adults: Obese adults between the ages of 25 and 64 are at least four times more likely to have been diagnosed with diabetes than are those who have a normal weight. Among obese adults, increased risk of diabetes is highest from ages 35 to 39. Gallup and Sharecare also found that diabetes costs the U.S. economy an estimated $266 billion per year in healthcare utilization and unplanned absenteeism, and transportation workers have the highest diabetes rates.

Healthy eating linked to lower likelihood of depression: U.S. adults who report eating healthy all day "yesterday" are 34.1% less likely to currently have depression than those who say they did not eat healthy. Healthy eating is also tied to a lower probability of obesity, diabetes, heart attack, high blood pressure and high cholesterol. Despite the benefits of healthy eating, the percentage of U.S. adults who reported eating healthy "yesterday" fell to a nine-year low in 2016.

Medicaid recipients most likely to smoke and be obese: Medicaid recipients rate their health worse and are more likely to suffer from chronic conditions than are those with other types of insurance. Their higher smoking rates and obesity rates may contribute to their poorer health. These findings suggest that focusing on preventative healthcare, smoking cessation and weight loss could lower Medicaid program costs.

Daily worry increased sharply after the U.S. presidential election: The average percentage of U.S. adults experiencing daily worry rose after President Donald Trump's election and through the first month of his presidency, primarily among Democrats. The increase in worry was greater than after Barack Obama won his first presidential election and took office. Gallup and Sharecare later found that daily worry eased as Trump's presidency continued but still remained higher than before he was elected.

Blacks' life optimism most likely to go unmet: Blacks are more optimistic about their future lives than whites, Asians and Hispanics are. However, data from 2008 through 2016 reveal that blacks' actual life satisfaction was significantly lower than what they had predicted it would be five years earlier.

Check out more findings from the Gallup-Sharecare Well-Being Index. To stay up to date on the latest health and well-being findings in 2018, sign up for Gallup News alerts. 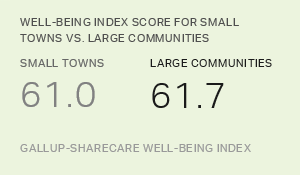 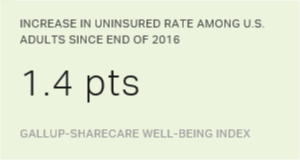