WASHINGTON, D.C. -- Americans' anxiety about experiencing various crimes has largely returned to 2019 levels after dipping during the first year of the pandemic, when social distancing was still high.

The percentages of U.S. adults who report that they "frequently" or "occasionally" worry about several specific types of violent and property crimes have increased between five and nine points over the past year. These include getting mugged, having their car stolen or broken into, having their home burglarized when they are at home or away from home, being attacked while driving, being a victim of identity theft, getting murdered and being a victim of terrorism.

Worry about the other five crimes is statistically unchanged in comparison with last year, showing differences of less than five points each. Among them are having a school-aged child physically harmed at school, being assaulted or killed by a coworker, being a victim of a hate crime, being sexually assaulted and having one's personal information stolen by computer hackers.

These findings are from Gallup's Oct. 1-19 Crime poll, which shows that the latest changes in worry about most of the crimes have essentially restored them to their 2019 levels. However, concerns about being attacked while driving, being a victim of identity theft and being a victim of a hate crime are higher now than in 2019, while worry about one's child being harmed at school is now lower than it was two years ago.

Cybercrimes Remain Most Worrying to Americans

Gallup has tracked worries about most of the crimes on the list nearly every year since 2000, although the items concerning cybercrimes were added in 2009 (identity theft) and 2017 (computer hacking). Concerns about these two cybercrimes have consistently outpaced the other crimes since they first appeared on the list. Americans are generally more likely to say they or another member of their house has been the victim of these two cybercrimes.

Although none of the 13 crimes is a frequent worry for more than 39% of Americans, majorities say they worry at least occasionally about computer hacking (74%) and identity theft (72%). Meanwhile, between 30% and 43% of U.S. adults worry at least occasionally about their car being stolen, their home being burglarized while they are not there, their child being harmed at school, getting mugged, and being a victim of a hate crime or of terrorism. Fear of being assaulted or killed by a coworker while on the job is at the bottom of the list. 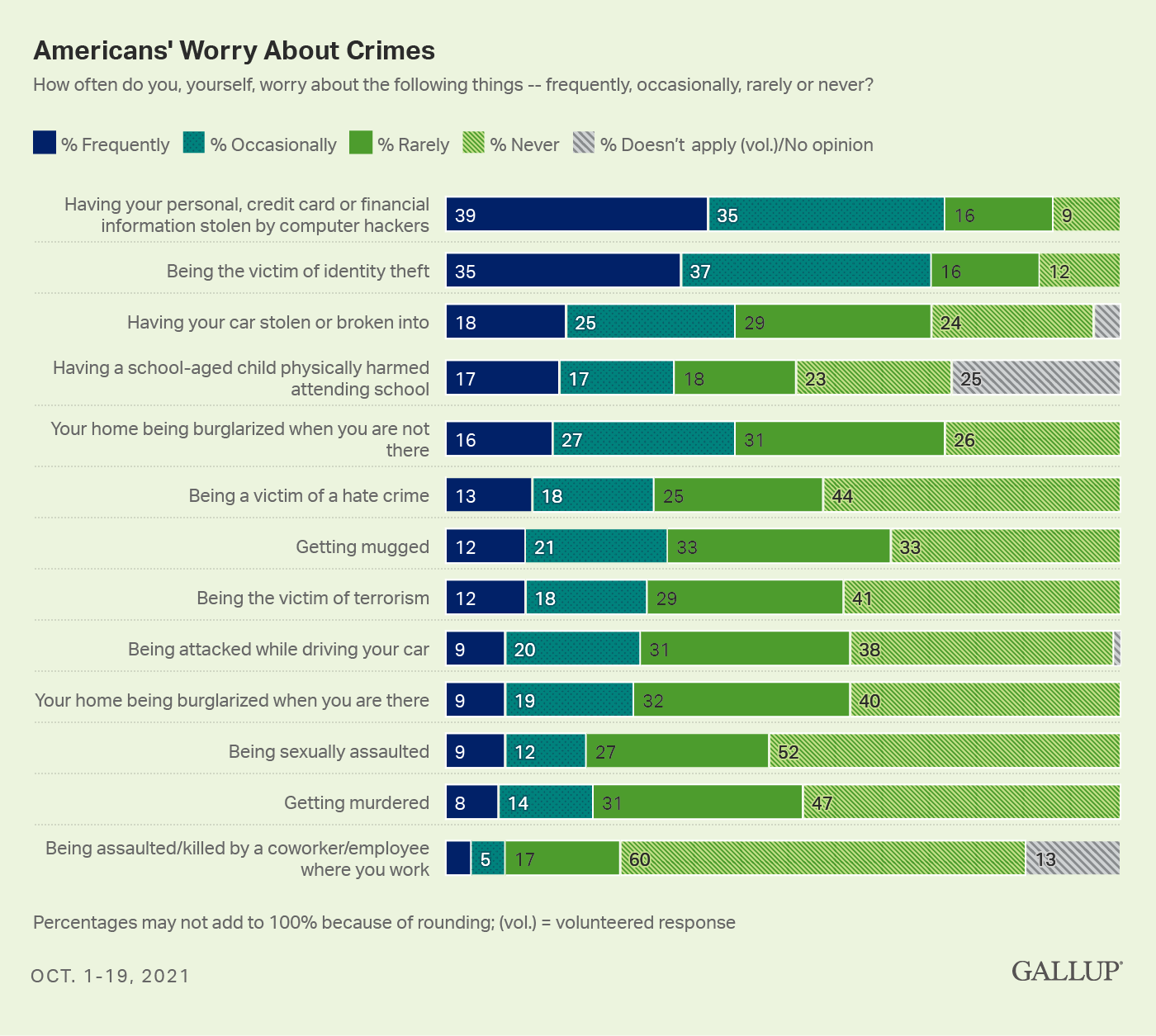 Bar graph. How often Americans worry about being victim of 13 crimes -- having their personal information hacked, identity stolen, car stolen, child harmed at school, home burglarized when not there, being a victim of a hate crime, mugging, terrorism, being attacked while driving car, home burglarized when there, sexually assaulted, murdered, and assaulted or killed on the job by a coworker. They worry most frequently about being hacked or having their identity stolen and least about being assaulted or killed by a coworker.

There are a number of notable differences in worry about various crimes among some demographic subgroups:

The new survey also updates a Gallup question last asked in 2007, which explores how Americans try to protect themselves from becoming the victim of a crime. Of the seven methods, avoiding certain neighborhoods or areas was the top proactive step U.S. adults took in 2007, and it remains the top means of self-protection today, at 52%.

Following distantly behind avoidance of dangerous areas, 37% of U.S. adults say they keep a dog for protection, 36% had a burglar alarm installed and 35% bought a gun for protection. Fewer, between 22% and 26%, say they carry mace or pepper spray, a gun, or a knife for self-defense. 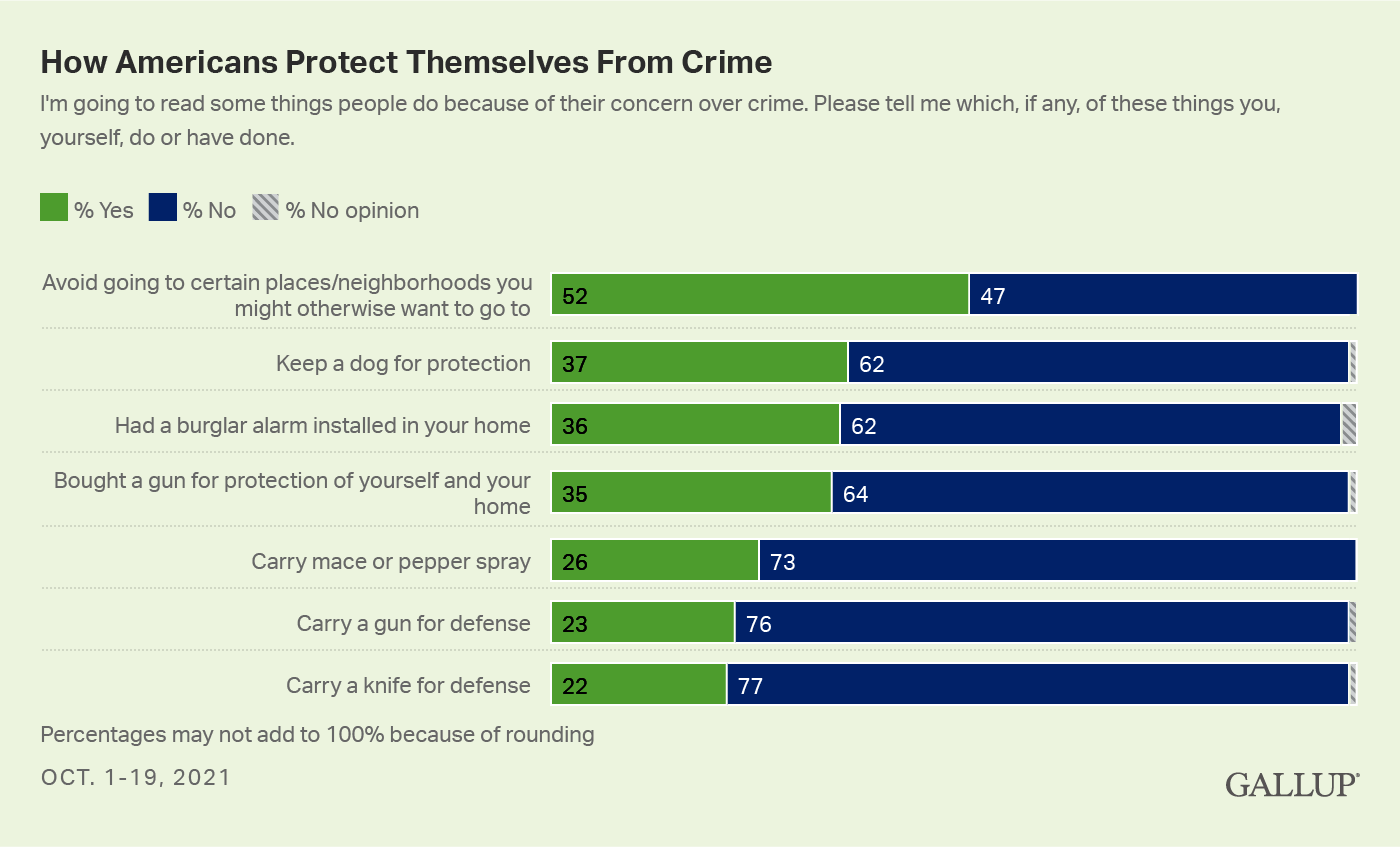 Bar graph. Percentages of Americans who take seven actions to protect themselves from crime. They are most likely to avoid going to certain places (52%), followed by keeping a dog for protection (37%), having installed a burglar alarm (36%), having bought a gun (35%), carrying mace or pepper spray (26%), carrying a gun (23%), and carrying a knife (22%).

Uses of All Means of Protection Have Increased Since 2007

Except for avoiding certain areas, Americans have become significantly more likely to say they use each of these methods of protection since 2007. Uses of personal defense weapons -- a gun, mace and a knife -- are up 10 to 12 points. At the same time, keeping a dog and installing a burglar alarm have risen five to six points.

Women and Men Protect Themselves From Crime in Different Ways

Additionally, U.S. adults who say they have been a victim of a crime in the past year are significantly more likely than nonvictims to take or have taken each of the seven precautions.

After experiencing a general downturn in worry about becoming a victim of various crimes in 2020, Americans' concerns have mostly rebounded, though more worry today about identity theft, being a hate-crime victim and being carjacked than did so two years ago. Cybercrimes, including computer hacking and identity theft, remain the top crime worries.

Changes in concern about crime over the past three years are likely due to several factors. The declines in worry seen in 2020 may have reflected an enhanced sense of security among Americans brought about by social distancing -- staying home more, avoiding public transportation and avoiding places with large crowds. The increases in worry this year may simply be the expected return to normal as social distancing behaviors have eased. But they could also reflect people's awareness from national crime statistics that violent crime was up last year. And while property crimes have continued to decline steadily, the news about violent crime may be influencing broader perceptions of the crime problem.

In their efforts to avoid becoming a crime victim, U.S. adults primarily stay away from dangerous areas. However, they have increased their reliance on other steps, including arming themselves with guns, knives, or mace, installing burglar alarms, and getting a dog.