WASHINGTON, D.C. -- Gallup's annual rating of the honesty and ethics of various professions finds five of the 22 occupations rated this year at new lows in public esteem. While the majority of Americans continue to believe military officers have high ethics (61%), the score is down 10 percentage points since it was last measured, in 2017. TV reporters' ethics rating has fallen nine points to 14% over the same period, and judges' has declined five points to 38%.

While down several points since 2020, the perceived ethics of clergy (36%) and grade-school teachers (64%) are just a point or two below their previous all-time lows. 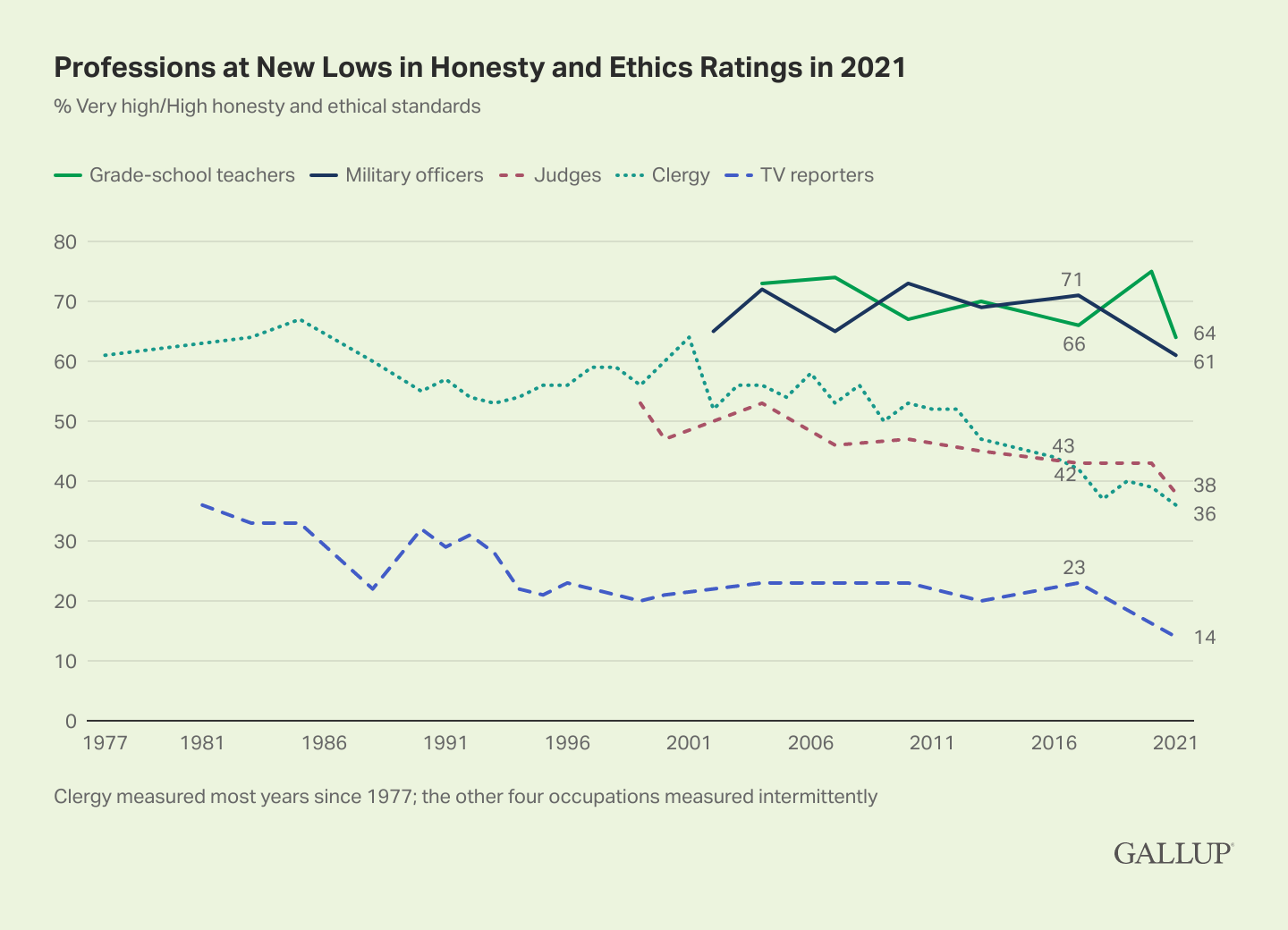 The latest results are based on Gallup's annual Honesty and Ethics survey, conducted Dec. 1-16, in which Americans were asked to rate the honesty and ethics of different occupational groups as very high, high, average, low or very low.

Gallup first conducted its Honesty and Ethics poll in 1976 and has updated it annually since 1990. A handful of professions have been on the list every year, while Gallup asks about others periodically.

For the 20th straight year, nurses lead Gallup's annual ranking of professions for having high honesty and ethics, eclipsing medical doctors in second place by 14 points -- 81% vs. 67%. Grade-school teachers (64%), pharmacists (63%) and military officers (61%) round out the top five most revered professions in this year's list, with more than six in 10 Americans viewing each as highly ethical.

Only two other professions rated in the new poll are considered exemplary for their honesty and ethics by at least half the public: police officers (53%) and day care providers (50%). The ethics of the remaining 15 professions receive high ratings from no more than 38% and as few as 5% of Americans.

Nurses have topped the list all but once since being added to Gallup's annual rating of professions in 1999. That was in 2001, when they were displaced by firefighters -- who earned an all-time-high honesty score of 90% when they were included on a one-time basis in the aftermath of the 9/11 attacks. Three hundred forty-three New York City firefighters lost their lives on 9/11 trying to rescue people from the World Trade Center towers.

The ratings of the four highest-rated lines of work in 2021 are down by eight to 11 points from 2020, essentially returning to their pre-pandemic normal levels after rallying in the first year of the COVID-19 pandemic.

Three of the top four -- nurses, medical doctors and pharmacists -- are medical professions that enjoyed boosted ratings in 2020, likely because of their service to the public during the pandemic. The 2020 rating for nurses was the highest for any profession other than firefighters in 2001, while doctors' rating was the highest ever for that profession. 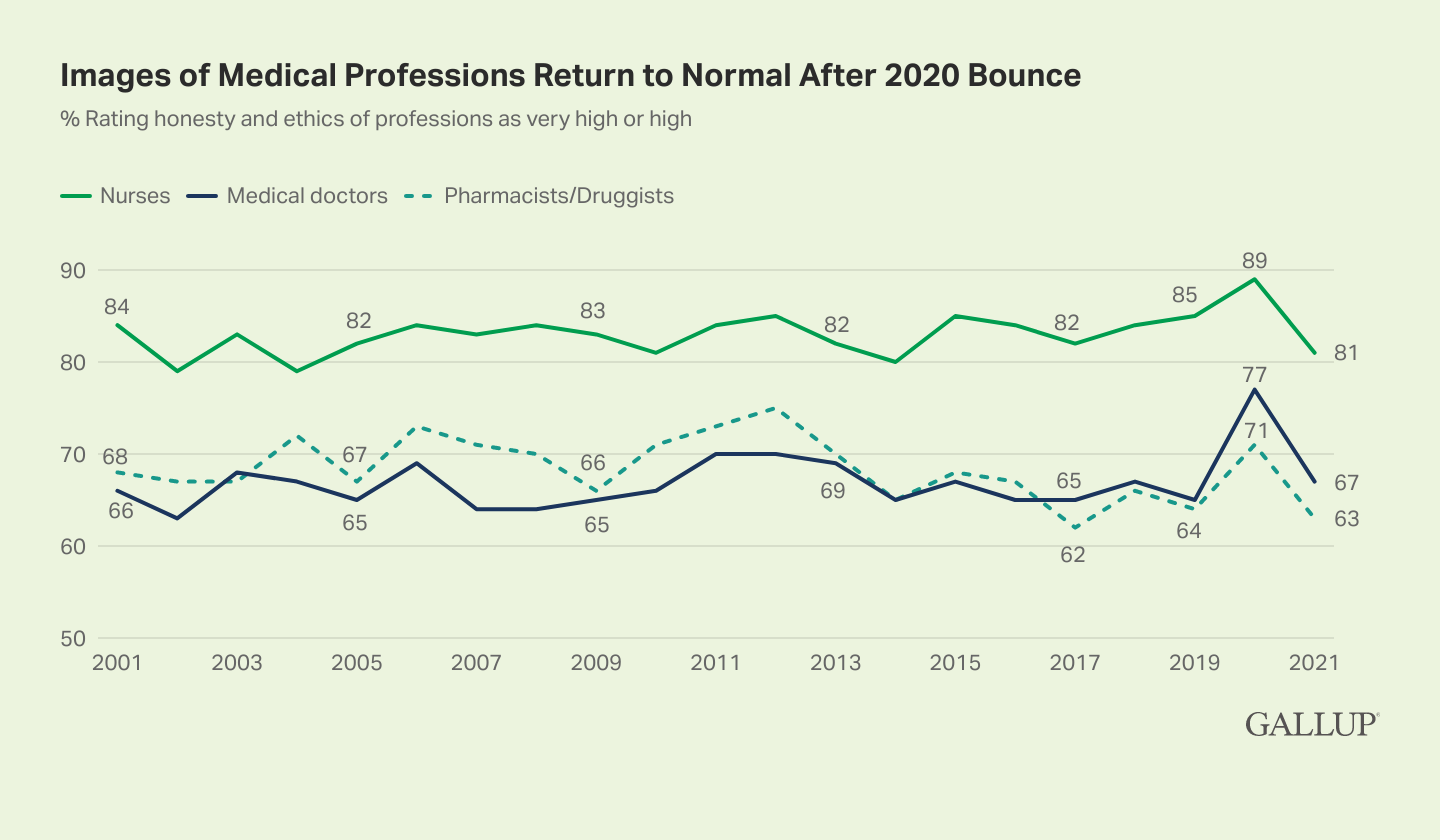 Line graph. Trend from 2001 to 2021 in honesty and ethics ratings of nurses, medical doctors and pharmacists. All three have consistently been high, but after rising even higher in 2020, they have returned to their prior levels. The percentages now rating the honesty and ethics of each as very high or high are 81% for nurses, 67% for medical doctors and 63% for pharmacists.

The fourth top-tier profession experiencing an image dip since 2020 is grade-school teachers. Teachers' rating had jumped to an all-time high of 75% in 2020 after varying between 66% and 70% from 2010 to 2017. Their current 64% is thus a new low. But while it's not significantly lower than some of their previous scores, the latest decline is driven by a notable downturn in positive ratings among Republicans.

Amid tension between teachers and parents in some school districts around the country over reopening schools for in-person learning, barely half of Republicans and Republican-leaning independents (54%) now rate grade-school teachers' ethics highly, below Republicans' pre-pandemic 70% average rating for teachers. By contrast, although down from 87% in 2020, 73% of Democrats and Democratic leaners today give high ratings to grade-school teachers, matching their pre-pandemic average.

Military officers' ethics rating has declined 10 points since Gallup last measured it, in 2017, while TV reporters' has fallen nine points over the same period. Both declines are mainly the result of reduced acclaim from Republicans and Republican-leaning independents.

Military officers are still revered more by Republicans (67%) than Democrats and Democratic leaners (59%), but their image among the GOP is now the lowest Gallup has recorded since the first reading, in 2002, a period spanning Republican and Democratic presidencies. While it's likely that Republicans' reduced esteem for U.S. military leaders is related to the U.S. withdrawal from Afghanistan last summer, the cause cannot be pinpointed, given the four-year gap since the prior measurement. 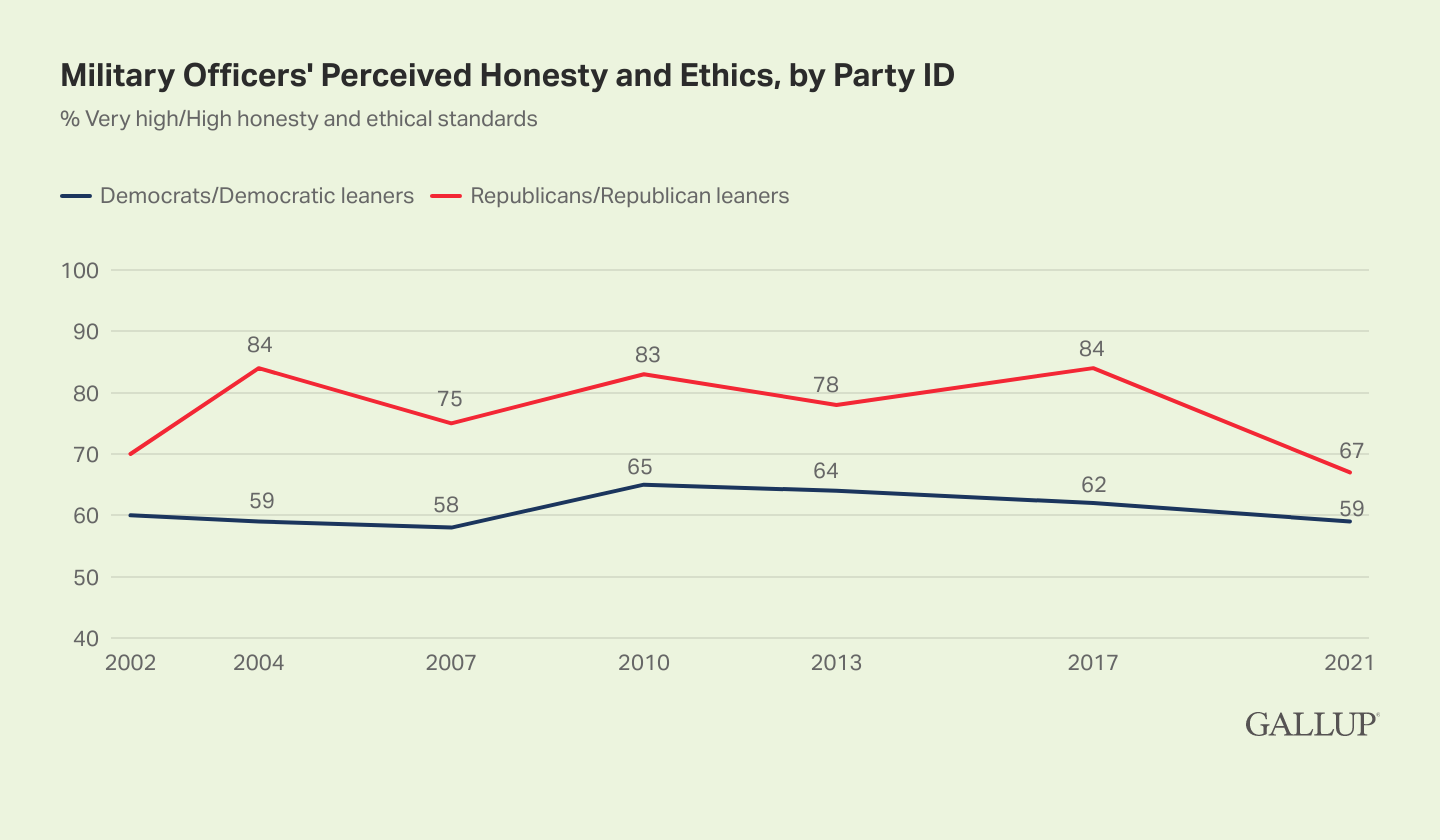 TV reporters' image is at an extreme low among Republicans and Republican leaners but about average among Democrats and leaners.

The percentage of Republicans viewing television reporters' honesty and ethics highly has gradually declined since 2010, hitting 6% this year. By contrast, Democrats' respect for television reporters was steady near 25% from 2000 to 2013 and then surged to 35% in 2017 -- likely reflecting Democrats' support for the media against verbal attacks by then-President Donald Trump. It has now returned to 24% among Democrats. 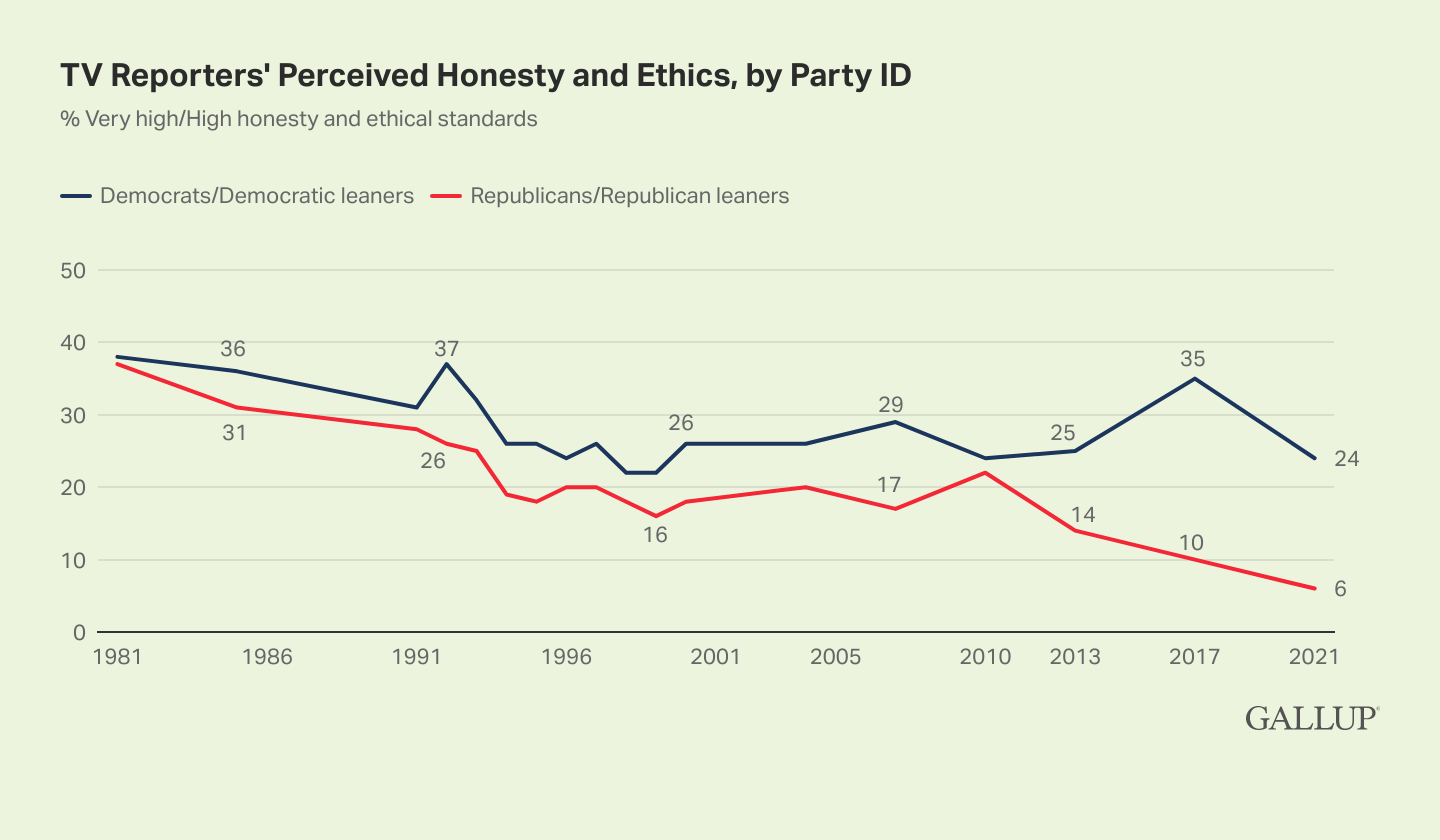 Judges have seen a gradual erosion of their ethics rating over the past decade, which reflects declines among both major party groups. Republicans' "very high/high" rating for judges descended from 54% in 1999 to 38% in 2020 and remains about the same, at 40%, today. Democrats' positive rating of judges' ethics was also 54% in 1999, after which it varied, but was 50% in 2020 only to fall to 36% in the latest poll.

Clergy's Decline Is More of the Same

The clergy's new low is the continuation of a two-decade slide, including a three-point slip since last year and a six-point decline since 2017. Longer term, clergy's image has diminished among both major party groups, most likely related to the broader societal trend of reduced religiosity.

In earlier decades, clergy were among the best-rated professions for their honesty and ethics, with their highest rating of 67% recorded in 1985. But a series of sexual abuse scandals over the years, including as recently as 2018, along with a steep decline in Americans' religiosity, has undermined public trust in the profession.

While not high in an absolute sense, auto mechanics' ethics rating is at an all-time high after two decades of gradual improvement. Whereas only 22% rated their ethics highly in 2001, that rose to 26% by 2004, 29% by 2013 and 32% in 2017; it is 35% today. While the reason for mechanics' improved image since 2001 isn't evident, it has occurred across all major demographic groups of society.

Republicans and Democrats Differ Most in Views of Police

The largest party difference in views of occupations measured in the new poll is for police officers, with Republicans rating them much better than Democrats. Republicans also have more-positive opinions than Democrats of military officers and clergy.

Democrats, on the other hand, give moderately better ratings than Republicans to newspaper reporters, medical doctors, grade-school teachers, TV reporters, pharmacists and members of Congress. Republicans and Democrats view all other professions similarly.

As is the norm in Gallup's long-term honesty and ethics trend, Americans most respect the honesty and ethics of people working in medicine, public safety (the military and police) and child care positions (specifically grade-school teachers and day care workers). Some of these ratings are down from their peaks in 2020, but they are still high.

At the other extreme, Americans are most skeptical of the ethics of elected officials, particularly at the federal level, as well as the media and people selling products or influence (car salespeople, advertising people and lobbyists).

A number of professions' ethics are primarily seen as average, either by a plurality or slim majority of Americans. Of these, the images of judges, clergy and auto mechanics tilt positive, given higher positive than negative ratings for their ethics, while lawyers' and business executives' images tilt negative. Bankers, nursing home operators and local officeholders have the most neutral images of all, with the largest percentages calling them average and the rest about evenly divided between viewing them positively and negatively.

While the overall rank order of professions is similar to the historical trends, medical professions garner less lofty scores than they did in the first year of the pandemic. Others -- military officers, grade-school teachers, judges, clergy and TV reporters -- are at relative low points that reflect more systemic issues.