WASHINGTON, D.C. -- When thinking about the state of the nation, just 21% of Americans say they are satisfied with the way things are going, and 78% are dissatisfied. This reading, from a Feb. 1-17 Gallup poll, is slightly improved from the 17% recorded in January, but still among the lowest since President Joe Biden took office. 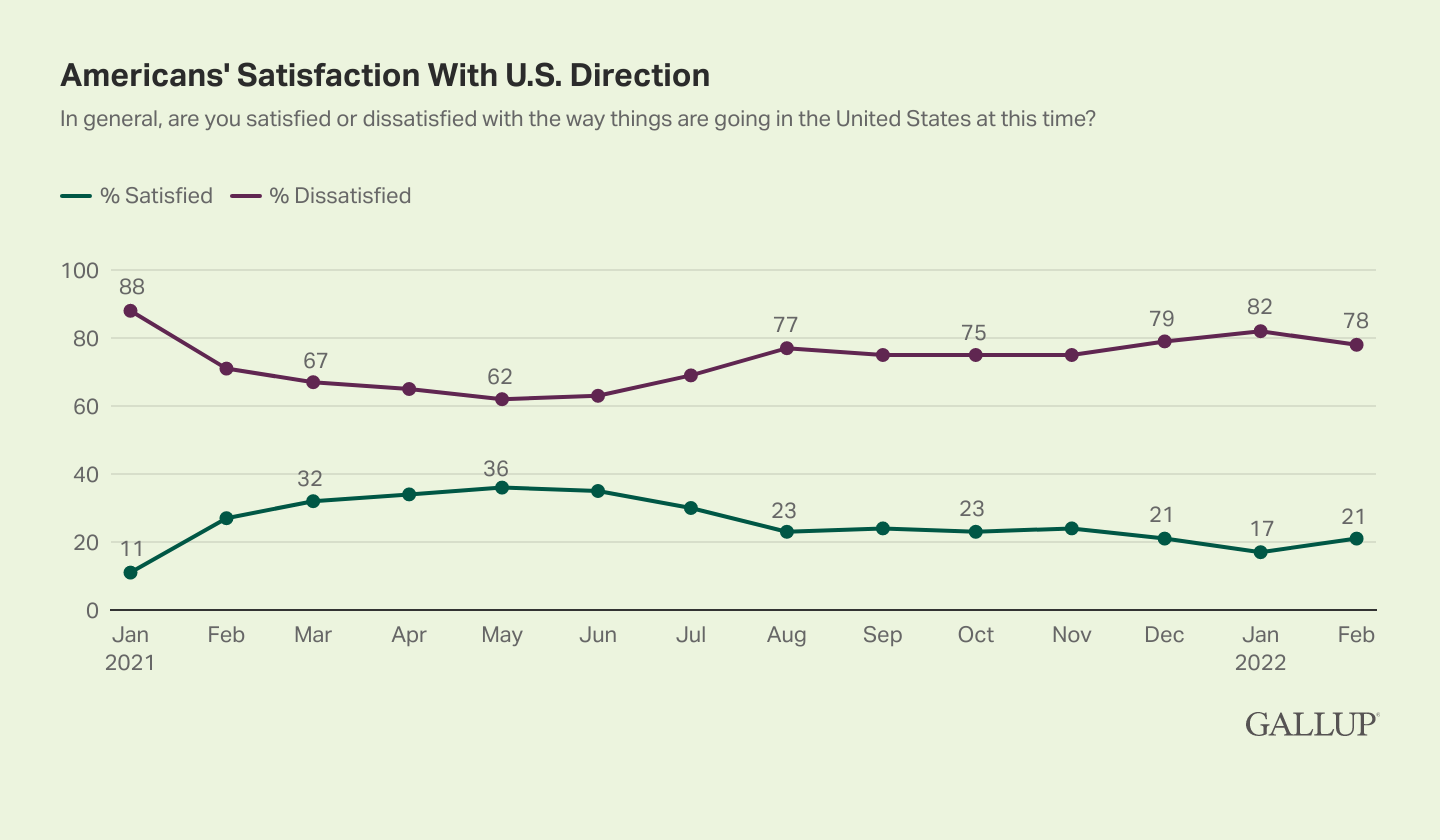 A year ago, the national mood was brightening as Americans started receiving COVID-19 vaccines, and the economy was opening up in the first months of the Biden presidency. But after peaking at 36% last May, Americans' satisfaction with the direction of the country headed back down -- in part due to rising COVID-19 cases but also mounting inflation -- and has yet to recover.

The latest poll was conducted amid reports that Russia was positioning its military forces along its border with Ukraine, but ended before President Vladimir Putin ordered the invasion of the country.

Gallup's annual in-depth report on Americans' satisfaction with how the country is faring in a number of specific areas, based on Gallup's January Mood of the Nation survey, found satisfaction with most aspects remaining depressed since the pandemic began. The percentage satisfied ranged from a high of 69% for the overall quality of life to as low as 20% for the nation's moral and ethical climate.

At the time of the February survey, only 2% of Americans cited "the situation with Russia" when asked to say, unaided, what they think is the most important problem facing the country today. Although the U.S. is not directly involved in the Ukraine conflict, and Biden has stated he will not send U.S. troops there, it's likely that more Americans would believe Russia represents a top problem if asked today.

The economy was the much greater concern of Americans in early February, with 30% mentioning at least one economic problem, such as inflation or the economy in general. This was up from 22% combined economic mentions in January and, along with December's 29% reading, is the highest percentage citing economic concerns over the past year.

Reflecting the recent decline in coronavirus infections from the waning omicron variant, the proportion of Americans citing COVID-19 as the top problem fell back to 13%, after reaching 20% in January.

The only other issues that 5% or more of Americans consider paramount are immigration (8%) and lack of unity in the country (6%). Racial issues and the judicial system are each named by 4%, while 3% each mention healthcare, crime and poverty.

More Describe the Economy as "Poor" and "Getting Worse"

Underscoring Americans' recent concern about the economy, the percentage describing national economic conditions as "poor" increased five percentage points to 42% in February, and the percentage saying conditions are getting worse ticked up three points to 70%. Both figures are tied for the highest they have been since the first months of the pandemic.

In addition to those saying economic conditions are poor, 37% consider them "only fair," while 21% say they are "excellent" or "good." 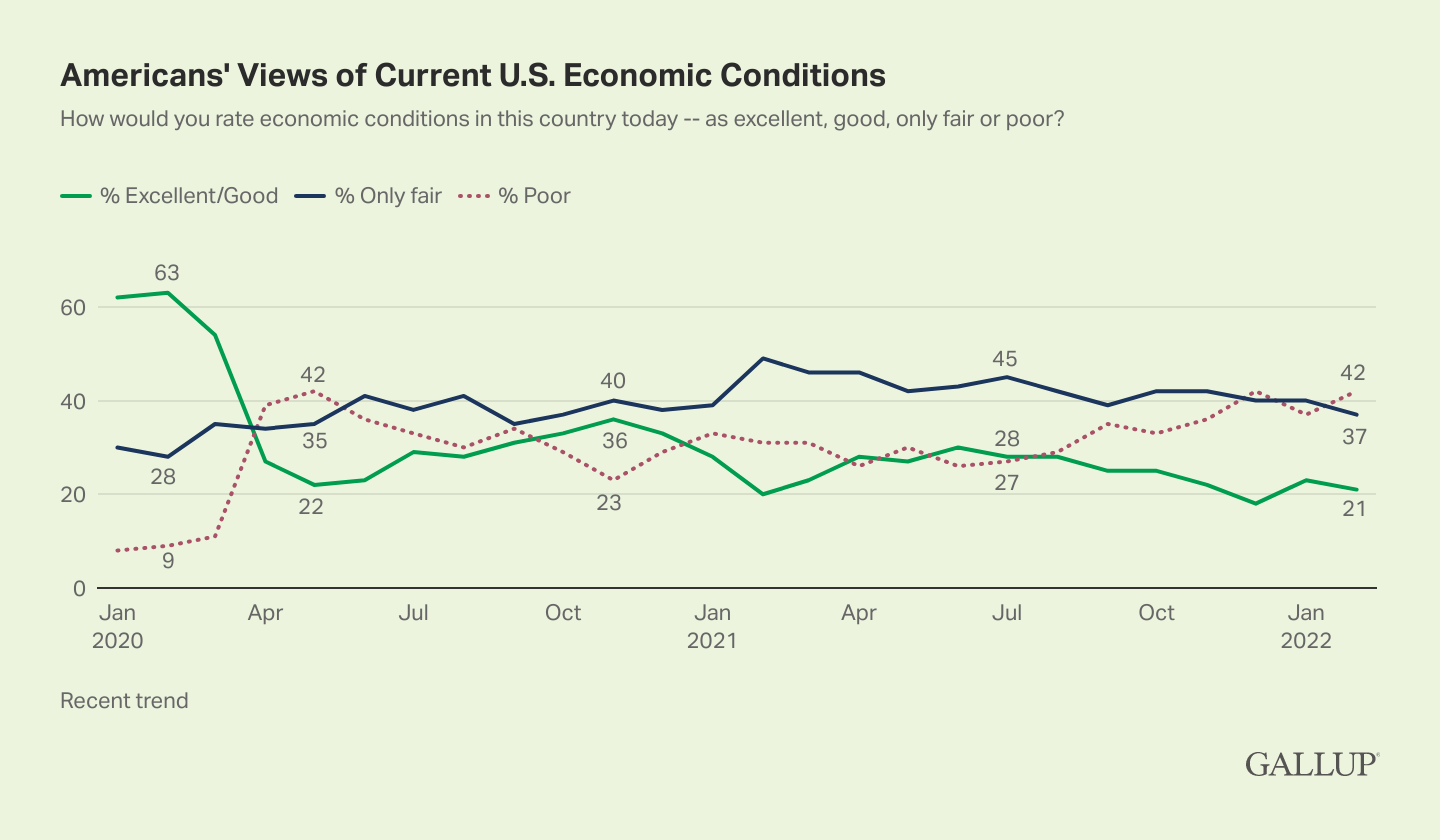 The 70% of Americans who believe economic conditions are worsening is tied for the highest since April 2020, the first full month of the pandemic, when millions of American workers were being sent home amid the unprecedented economic shutdown. 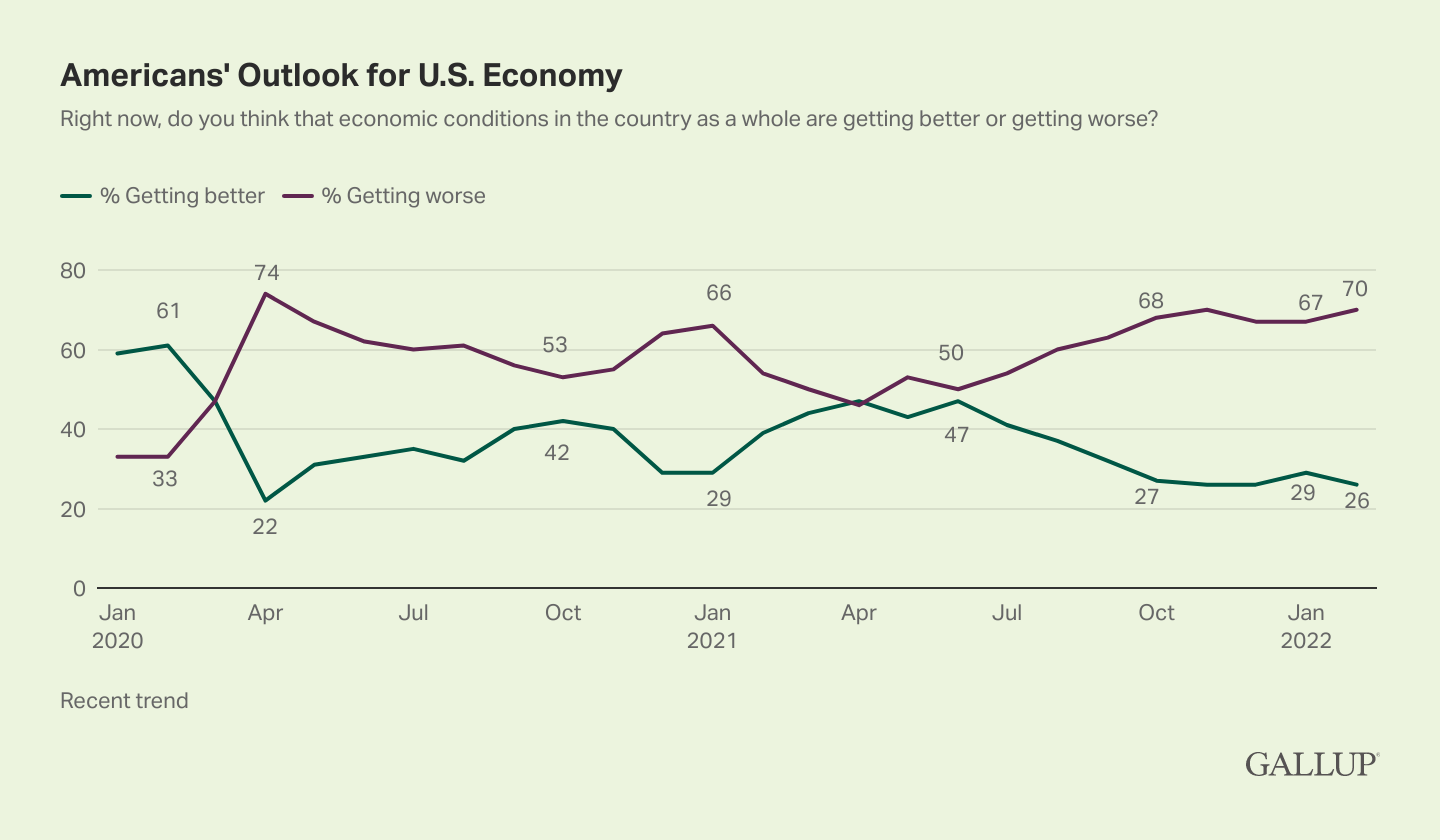 Line graph. Monthly trend from January 2020 to February 2022 in Americans' outlook for economic conditions in the country. The percentage saying the economy is getting better was 61% in February 2020, then fell to 22% by April 2020. It gradually improved to 47% by mid-2021 before falling again to 27% in October and has remained low since, including 26% today. The percentage saying the economy is getting worse is now 70%, up from the recent low of 46% in April 2021.

Gallup combines these two ratings of the economy to produce its Economic Confidence Index (ECI). That index, which has a theoretical range from -100 to +100, is now -33, down slightly from -26 in January. Today's ECI score is tied with last December's for the lowest since April 2020.

Biden will deliver his State of the Union address to the nation Tuesday evening at a time when Americans are glum about the country's direction. While Americans have a variety of reasons for feeling things are off track, on the whole, the continuation of the pandemic, ongoing inflation and partisan frustrations seem to be at the heart of their discontent.

Even before Russia invaded Ukraine, a majority of Americans viewed the conflict as a threat to U.S. vital interests. As a result, the situation has the potential to change how Americans feel about conditions in the U.S. But whether it improves or further sours the public's mood will partly depend on how the United States' economy, military and global status are affected as events unfold.