WASHINGTON, D.C. -- After a strong rebound during President Joe Biden's first six months in office, approval ratings of U.S. leadership around the world slipped in the second half of the year, coinciding with the U.S. withdrawal from Afghanistan.

A new Gallup report details that by early August 2021, median approval of U.S. leadership worldwide stood at 49% across 46 countries and territories surveyed by that point. This approval rating matched the record-high rating when former President Barack Obama first took office in 2009.

However, the United States' overall rating slipped in the second half of the year. Across 70 additional countries and territories surveyed during and after the U.S. withdrawal from Afghanistan, median approval stood at 43%.

Biden ended his first year in office with a 45% median approval rating across a total of 116 countries and territories. While far from a ringing global endorsement of U.S. leadership, this rating is much higher than the 30% approval rating in the last year of Donald Trump's presidency or any of the previous ratings during the Trump administration. 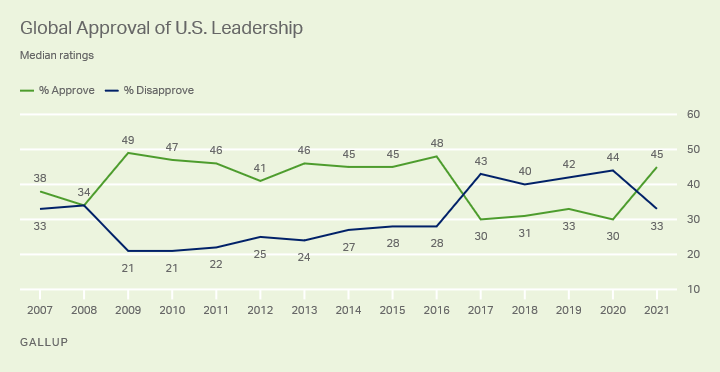 Without pre- and post-Afghanistan withdrawal measures in these same 116 countries, it is difficult to tease out links between the withdrawal and the general decline in approval ratings. It's possible that the withdrawal, which drew criticism of Biden at home and abroad, damaged people's perceptions of U.S. leadership.

However, the lower ratings may also reflect the makeup of the countries and territories surveyed in the latter half of 2021. The list includes Iran, which gave the U.S. a 7% approval rating in 2021, and a host of other countries in the Middle East, North Africa and former Soviet states that have historically rated U.S. leadership lower.

Despite the overall decline, U.S. leadership still earned majority approval from residents in 24 of the 70 countries and territories surveyed in the later months of 2021. Ratings also improved by 10 points or more compared with the previous year in 23 countries.

In addition to asking about U.S. leadership each year, Gallup also asks the world about the leadership of other global powers, including Germany, China and Russia.

Before Russia's invasion of Ukraine in February 2022, Gallup surveys showed the U.S. and Germany held more "soft power" around the world than they had in years. In that regard, both countries were in much stronger positions heading into the conflict than either Russia or China.

Despite the surge in approval ratings for the U.S., Germany remained the top-rated global power for the fifth year in a row as it prepared for longtime Chancellor Angela Merkel to leave office. In 2021, median approval of Germany's leadership across 116 countries and territories stood at 50% -- essentially unchanged from the record-high 52% approval rating in 2020. 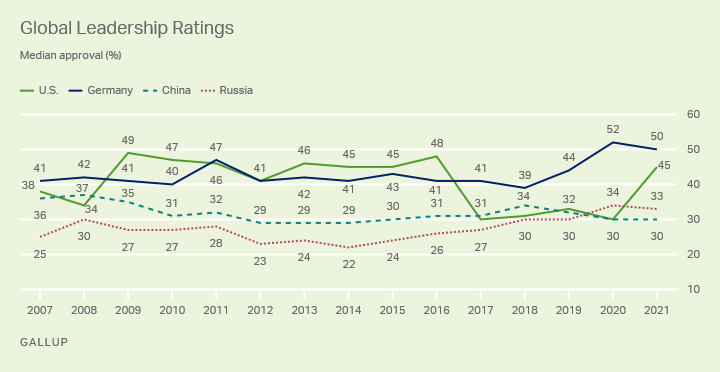 Line graph. Trend lines showing median approval ratings of the leadership of the U.S., Germany, Russia and China between 2007 and 2021.

With much of the world condemning the invasion of Ukraine, Russia's approval ratings could retreat even lower than the record-low 22% Gallup observed in 2014 after Russia annexed Crimea from Ukraine. China's future ratings, too, could be linked to how it responds to the crisis.

Although the image of U.S. leadership slipped in the second half of 2021, the surge in approval ratings between 2020 and 2021 suggests that Biden's efforts to restore alliances appeared to be paying off -- at least initially.

Some of this goodwill -- particularly among NATO members -- may have helped Biden unify NATO's response to Russia's invasion of Ukraine this year. He will need to continue to tap into that as the war in Ukraine continues. But whatever happens next in this crisis has the potential to undermine -- or bolster -- the rest of Biden's presidency and shape the next world order.

Read more about how the world views the leadership of the U.S., Germany, Russia and China in Gallup's latest Rating World Leaders report.

Results for the 2021 approval ratings are based on nationally representative, probability-based samples among the adult populations, aged 15 and older, in 116 countries and areas surveyed between April 2021 and January 2022. Surveys were conducted either through telephone or face-to-face interviews.