Mobile phones have become so integral to the lives of such a large share of humanity that it's easy to lose sight of the fact that they were far from commonplace in any part of the world just 20 years ago -- and internet-enabled smartphones have become prevalent in many regions in an even shorter time. A staggering 82% of adults worldwide personally had a mobile phone in 2016, according to Gallup's global surveys representing more than 99% of the world's population.

The breakneck speed with which mobile phones and other mobile IT devices have swept across the planet is a testament to their usefulness and versatility. They now influence billions of lives, changing the way people live and work, giving people access to vast social networks and providing new ways to deliver essential information and services. But the remarkable ascent of mobile phones raises an important question that can't be addressed simply by listing their various uses: Do they actually make their owners happier?

A new study of global data from the Gallup World Poll with the mobile industry trade network GSMA, released today, addresses this question by looking at the relationships between people's use of mobile phones and the internet on one hand, and their self-reported measures of happiness -- which researchers refer to as subjective well-being (SWB) -- on the other. The study finds that, even after accounting for income and a range of other potentially confounding variables, mobile phone ownership supplemented with internet access is associated with improvements in two common measures of SWB: 1) the ratings people give their overall lives, and 2) the positive vs. negative emotions people experience on a daily basis.

The Gallup World Poll asks adults worldwide to rate their lives on a zero-to-10 scale, where zero represents the worst possible life for them, and 10 the best possible life. The global average across 142 countries in 2016 was 5.26, with country-level averages varying by 2.5 to three scale points between the world's most and least economically developed regions.

The global results suggest the power of mobile phones to improve lives is largely attributable to their status as the primary device by which most of the world's residents access the internet. In the absence of internet access, those who have a mobile phone give similar life ratings to those without one. Internet access, however, is associated with an increase of about 1.25 points on the life evaluation scale, whether or not those with access also have a mobile phone.

Multivariate analysis techniques confirm that these relationships are statistically significant even in models that hold a broad range of socioeconomic variables constant. In other words, the higher life ratings associated with mobile phone and internet use can't be fully explained by the fact that access to these technologies is greater in more affluent environments.

The second type of SWB indicator tested for this study is more closely aligned with a literal conception of "happiness:" the balance of positive vs. negative emotions that people feel in their daily lives. Gallup asks respondents worldwide whether they experienced several positive and negative emotions -- such as enjoyment, sadness and anger -- for much of the previous day. Negative emotions are subtracted from positive emotions to produce a single Affect Balance (AB) score for each person.

Questions about daily emotions are less consistently related to material living standards around the world than overall life evaluations are, but negative emotions do tend to be more common in countries and regions that are subject to conflict and instability. In 2016, regional AB scores ranged from a high of 1.97 in East Asia to 0.93 in the conflict-plagued Middle East/North Africa region.

This global analysis suggests that having a mobile phone alone (the absence of internet access) provides a modest boost with regard to people's daily emotional experiences. However, it does not appear to influence people's overall ratings of their own lives. Given the near-universal rates of mobile penetration in many countries, basic mobile access may be something that is taken for granted -- and thus not a consideration in people's life evaluations, even if its absence would be greatly disruptive.

The results suggest that when mobile access is complemented by internet access, the well-being potential of information technologies is more fully realized, and clearly reflected in both life evaluations and emotional affect metrics. This is particularly the case in regions such as sub-Saharan Africa and South Asia, where mobile information technologies have been increasingly used to deliver vital information and services in disadvantaged rural areas. Given the innumerable ways the internet has expanded human capabilities, it is perhaps no surprise that the most substantial well-being gains are associated with online access. Mobile devices improve happiness largely by bringing that access to so many around the world who would otherwise not have it.

Steve Crabtree is a Senior Editor and Research Analyst at Gallup.
Julia Burchell is a Senior Manager, Mobile for Development, at GSMA. 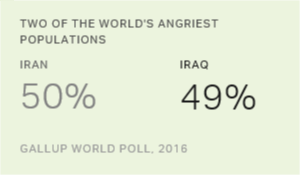