On this International Women's Day, a new research study by GSMA, which represents the interests of mobile operators worldwide, and Gallup reveals that bridging the mobile and internet gender gap may help boost women's wellbeing across the developing world.

The forthcoming study, to be published in April 2019, examines the relationship between mobile connectivity -- encompassing mobile ownership and internet technology use -- and wellbeing gains among men and women in 142 countries. Previous findings showed that mobile phone ownership supplemented with internet access is associated with two common measures of subjective wellbeing: 1) the ratings people give their overall lives and 2) the balance of positive vs. negative emotions that people experience daily.

This latest study shows, for the first time, that the reported increase in wellbeing associated with mobile ownership and internet access affects men and women equally, even when accounting for external factors such as levels of income and education. This means that both men and women derive significant wellbeing gains if they own a mobile phone that is supplemented with internet access. These gains likely reflect how mobile phones can help women feel safer and more connected. This, and the ability to access the internet via mobile devices, can empower them in many ways -- for example, through financial inclusion, health information, employment opportunities and educational content. Mobile phones could be an invaluable economic asset and an important tool toward autonomy, mobility and communication.

In low-income countries, where internet access is not widespread, there is a smaller independent increase associated with mobile phone ownership alone -- which means that simply owning a phone is associated with an improvement in how women rate their own lives.

This potentially means that women may be more likely than men to derive wellbeing gains from access to basic mobile functions; for example, using mobile phones to communicate with their family network.

Women Missing Out on Wellbeing Benefits of Connectivity

Despite the wellbeing gains, women are disproportionately missing out on the wellbeing benefits of connectivity compared with men. The study shows that there is uneven access to mobile phones and/or the internet between men and women, particularly in the developing world.

In many developing countries, access to both mobile and internet technology is substantially lower among women than among men. In low-income countries, according to Gallup data, half of the women (50%) have neither mobile nor internet access, in comparison to one-third of men (34%). The largest regional differences between women and men on this measure are seen in the Middle East and North Africa (45% vs. 60%, respectively), South Asia (13% vs. 22%) and sub-Saharan Africa (18% vs. 27%). This analysis corroborates the gender-gap findings from GSMA Connected Women Programme's Mobile Gender Gap Report. The report shows that although 250 million more women became mobile owners in low- and middle-income countries since 2014, there is a persistent gender gap in mobile ownership -- 10% fewer women than men own mobile phones across low- and middle-income countries, and women are 23% less likely than men to use the mobile internet.

Closing this gap in these countries would mean a $700 billion increase in GDP -- that's equivalent to a 0.7% uplift; a huge economic opportunity.

Despite evidence of the positive effect that mobile phone ownership supplemented with internet access can have for both men and women, there is a gender disparity in the uptake and use of mobile technologies. This is most prevalent in low-income markets, where fewer women are receiving the wellbeing benefits associated with connectivity.

These differences are troubling because they may put women at a further disadvantage in some countries where they may be more vulnerable and have lower social status than men.

By closing the mobile and internet gender gap, governments and policymakers have an opportunity not only to support positive economic impact at an industrial and societal scale, but also to promote women's wellbeing at an individual level.

Julia Burchell is a Director of Insights, Mobile for Development, at GSMA.

Kiki Papachristoforou is a Strategic Partnerships Consultant at Gallup. 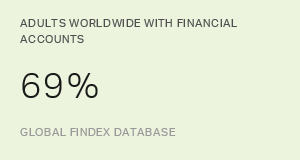 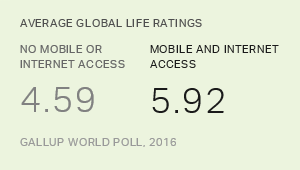