Instead of stepping away at the height of the pandemic, many volunteers around the world were stepping in to help, according to a study earlier this year by Gallup and the United Nations Volunteers (UNV) programme.

In fact, the joint study in eight low-, lower- and upper-middle-income countries -- where volunteerism data are often scarce -- revealed that as their communities grappled with COVID-19, most people were taking part in volunteer activities.

At least three in four adults across Bolivia, India, Kenya, Lebanon, Senegal, Thailand, Turkey and Uzbekistan said they had participated in at least one form of volunteerism in the previous 12 months. Volunteer action was almost universal in Senegal (98%), Kenya (92%) and Uzbekistan (92%).

Even with this high level of volunteer action, the survey, conducted between March and April 2021, also suggests that people's volunteer habits were affected during the pandemic.

When people were asked if they volunteered or helped people outside their families more, less or about the same compared with the previous year, the only countries where a high percentage reported volunteering more were Senegal and Uzbekistan. Volunteerism decreased significantly in India and, to a lesser degree, in several other countries.

The full results from this study were released in a standalone report in July, but they were also featured most recently in the UNV programme's fourth State of the World's Volunteerism Report (SWVR) launched in early December at the U.N.'s General Assembly.

The report, "Building Equal and Inclusive Societies," presents new evidence on volunteer-state partnerships, drawing on case-study research across Africa, Asia and the Pacific, Europe, the Commonwealth of Independent States, Arab states, and Latin America and the Caribbean.

The report demonstrates through this evidence that cooperation between volunteers and governments is helping build a culture of collaborative decision-making. The report also posits that through volunteer-state partnerships, volunteers have the capacity to reconfigure unequal power relationships between ordinary citizens and state authorities.

As countries and regions grapple with enormous challenges, one thing is clear: No single stakeholder, entity or sector can address these challenges alone. Now more than ever, partnerships are vitally important.

As countries start to build forward from the pandemic, governments and development stakeholders need to work even more closely with volunteers, engaging with them as key partners. New spaces for collaboration. Innovative development solutions. Effective responses to the needs of communities. And an inclusive 21st century social contract based on the expertise of volunteers.

This article was written in collaboration with the UNV.

The photo that appears with this article shows a volunteer assisting migrants queuing for COVID-19 vaccines in Beirut, Lebanon. Photo Source: UNV

The Most Generous Countries in the World 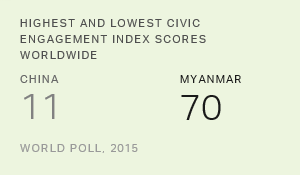 Philanthropic organizations must embrace agility and implement effective digital strategies as donations and volunteer activity fall due to COVID-19.