Preventive care is crucial to promoting women's health and wellbeing. The right test or screening can save women's lives, help them stay healthy and live longer.

But the inaugural Hologic Global Women's Health Index, a multiyear global survey of women's health, shows that during the first year of the pandemic, the majority of women worldwide said they weren't tested or screened for diseases and conditions that harm or kill millions of women every year.

This list includes the No. 1 killer of both women and men globally -- heart disease. On average, one in three women (33%) across the 116 countries and territories surveyed in 2020 said they had been tested in the past 12 months for high blood pressure, which can lead to heart disease, heart attack and stroke. 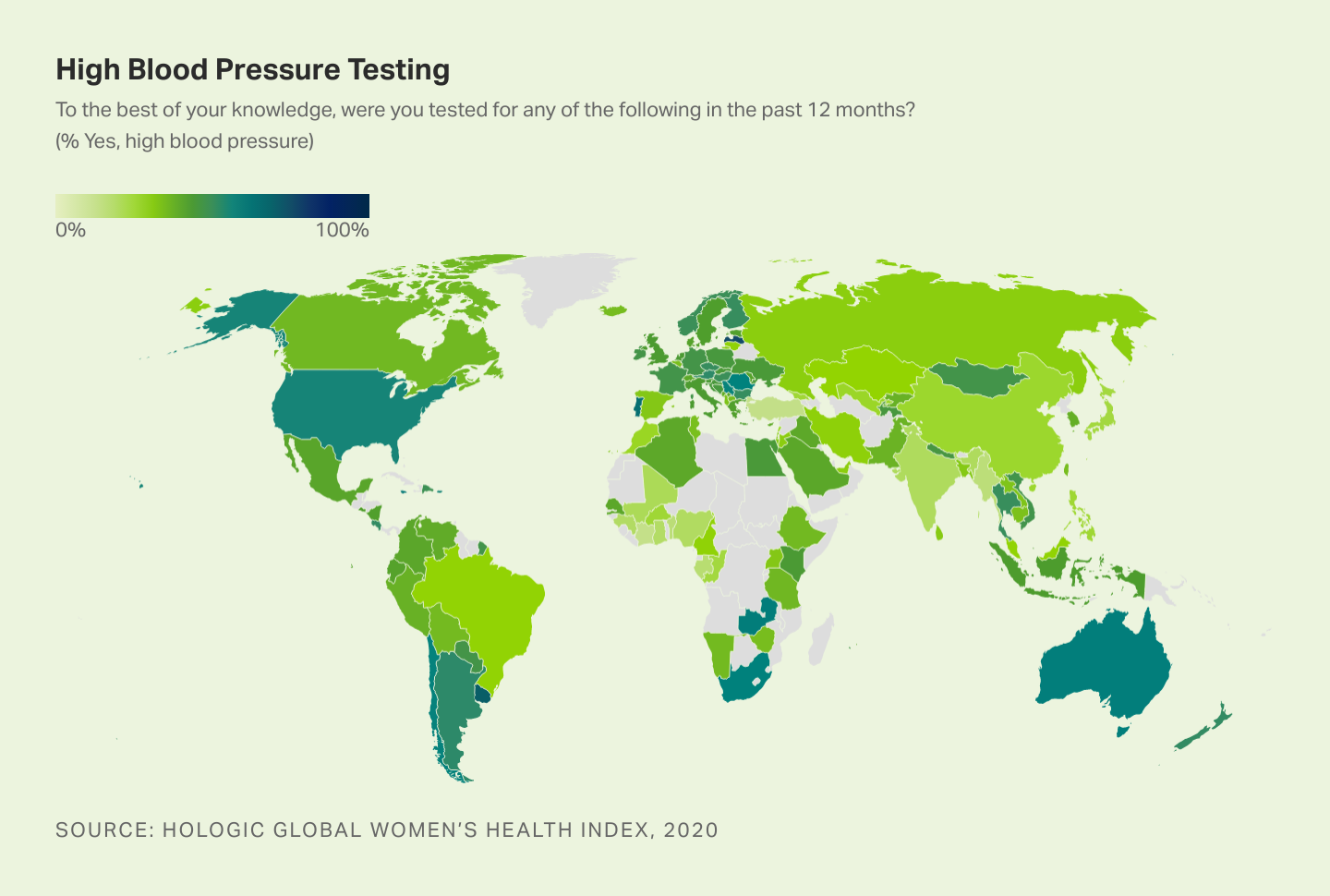 Heat map. Percentage of women by country who reported getting tested for high blood pressure in the past 12 months, according to the Global Hologic Women's Health Index. Rates worldwide ranged from 14% in Ivory Coast and Turkey to 76% in Latvia.

Obesity and diabetes-related diseases are a growing concern in all corners of the globe, and both are associated with heart disease and some cancers. Diabetes, by some estimates, is also the sixth-leading cause of death for women. However, fewer than one in five women (19%) reported being tested for diabetes in the past year.

Reported diabetes testing ranges widely, from a low of 6% among women in Nigeria, where the World Health Organization estimates that diabetes or high blood glucose kills more women than men annually, to a high of 46% of women in Portugal. 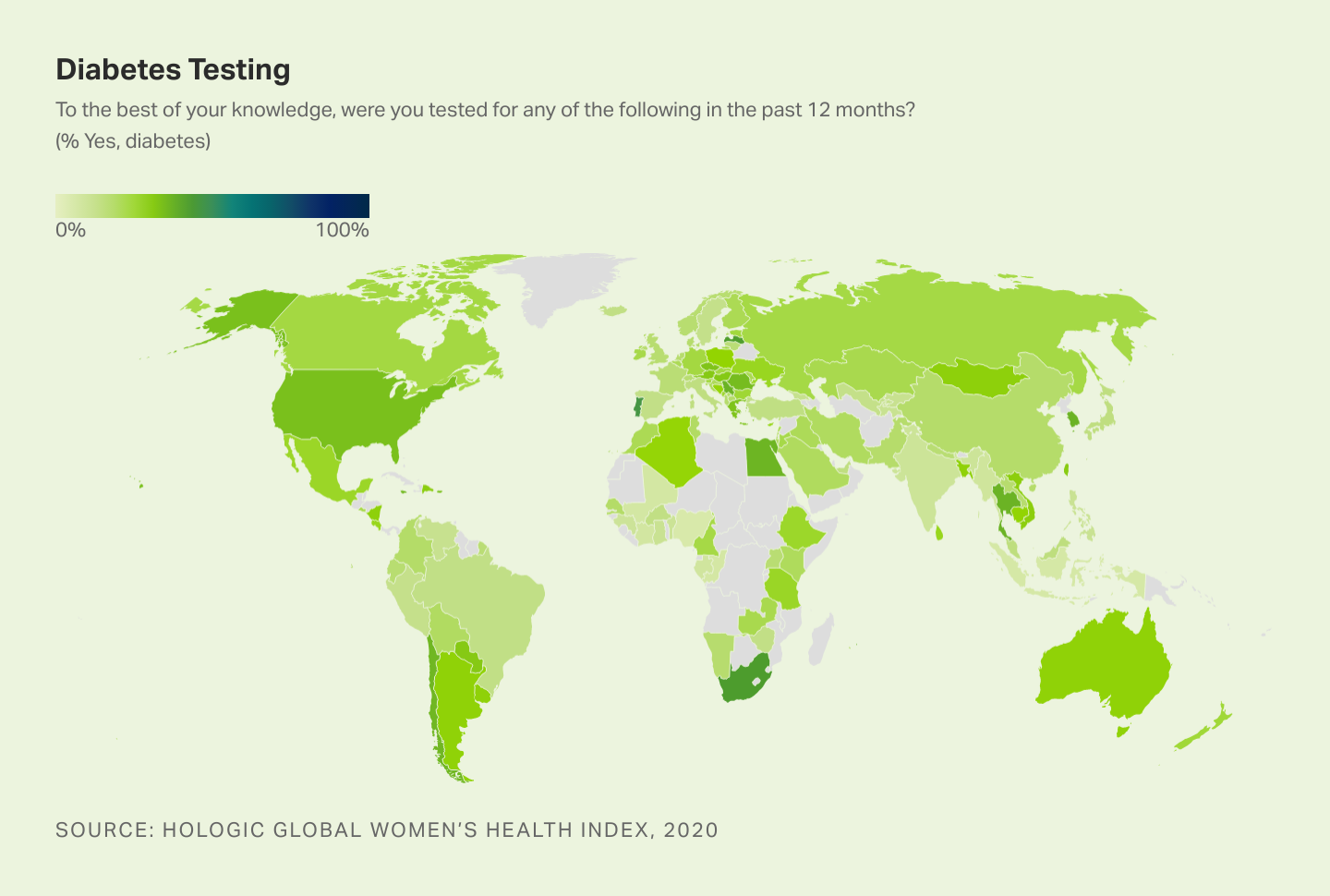 Heat map. Percentage of women by country who reported getting tested for diabetes in the past 12 months, according to the Global Hologic Women's Health Index. Rates worldwide ranged from 6% in Nigeria to a high of 46% in Portugal.

Breast cancer on its own ranks about eighth on the leading causes of death for women globally. But just 12% of women worldwide said in 2020 that they had been tested for any type of cancer in the past 12 months.

Even more troubling, the numbers were in the single digits in roughly 40 countries and territories. This includes less than 1% of women who said they were tested in Pakistan, where breast cancer rates are thought to be the highest in Asia, but the true numbers are unknown, as is the case in many lower-income countries.

Women in South Korea were the most likely in the world to say they were tested for cancer in that period, with 38% saying they had been tested. 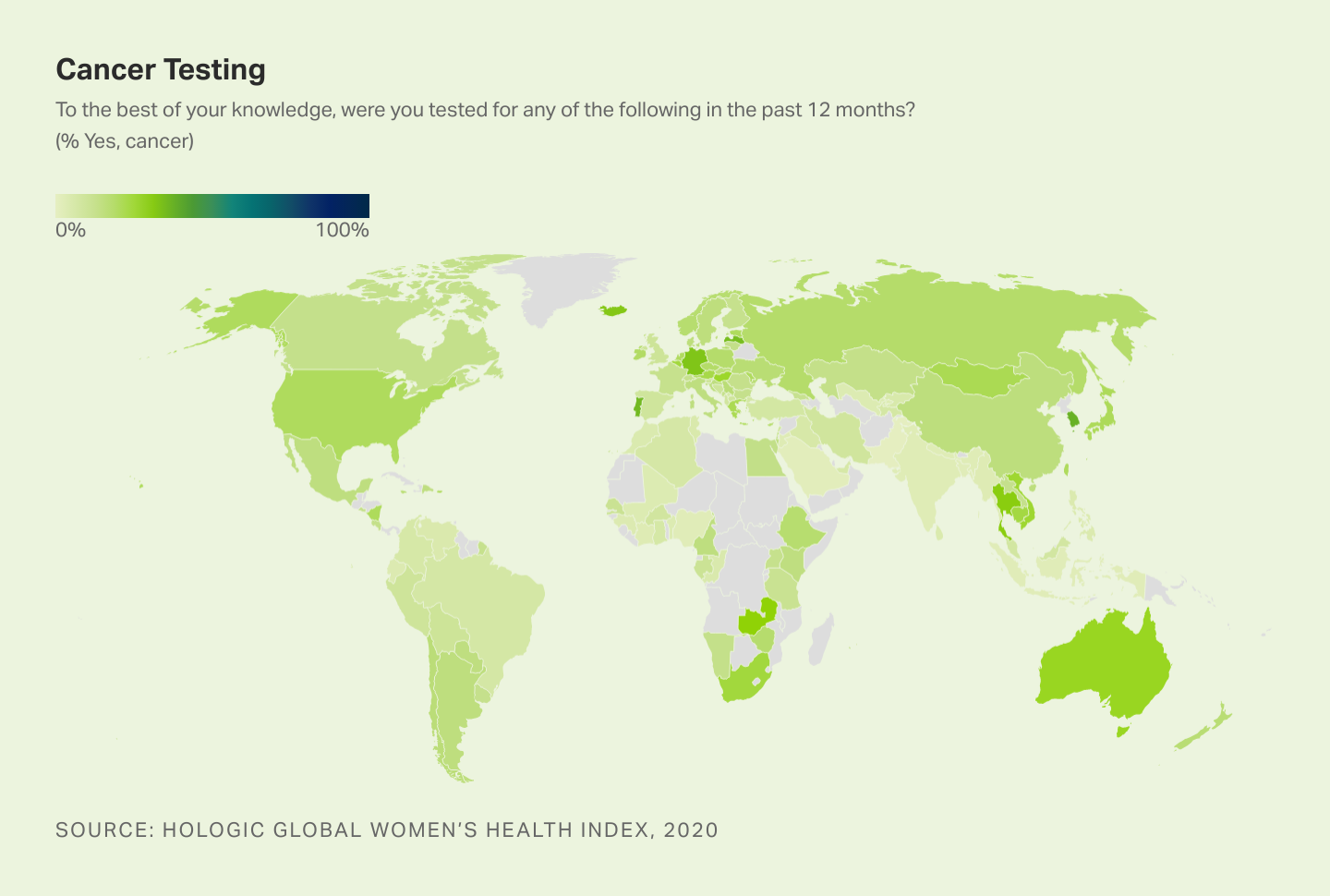 Heat map. Percentage of women by country who reported getting tested for cancer in the past 12 months, according to the Global Hologic Women's Health Index. Rates worldwide ranged from less than 1% in Pakistan to a high of 38% in South Korea.

Although they are not leading causes of death, sexually transmitted diseases and infections can have serious long-term health effects, including fertility problems and an increased risk of cervical cancer for women. However, worldwide, only about one in nine women (11%) said they had been tested for an STD/STI in the past 12 months. In fact, fewer than one in 10 women in 56 countries and territories said they had.

Testing percentages varied widely worldwide. Nearly half of women in countries including Zambia (48%), South Africa (47%) and Tanzania (47%), which continue to see high rates of HIV infections, said they had been tested in the past year. However, these numbers may reflect the increasing availability of HIV testing, particularly during prenatal care.

In a handful of countries and territories, including Japan -- which was involved in a high-profile HPV vaccine controversy in 2013 that led it to suspend recommending the vaccine -- as few as 2% of women said they had been tested for any STD or STI. 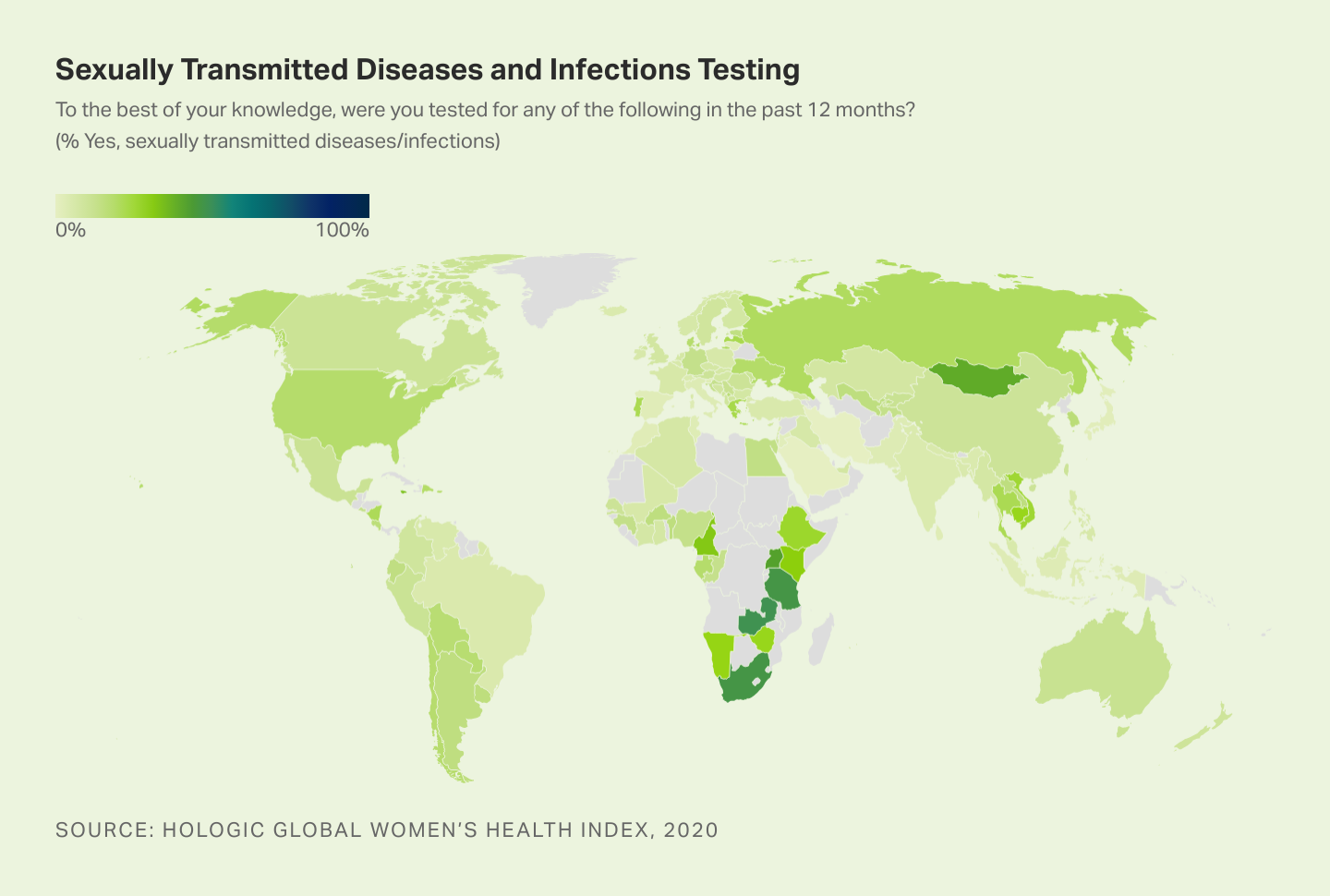 Heat map. Percentage of women by country who reported getting tested for sexually transmitted diseases and infections in the past 12 months, according to the Global Hologic Women's Health Index. Worldwide, fewer than one in 10 women in 56 countries and territories said they had been tested.

These findings are just a few of many sobering insights into women's health from the inaugural Hologic Global Women's Health Index. The survey reveals that every country or territory in the world -- high-income and low-income alike -- has work to do to help women lead healthier, safer and potentially longer lives, and nowhere is this more evident than in the area of preventive care.

Relatively few women reported being tested in the past year for four of the most serious diseases and conditions for women -- high blood pressure, cancer, diabetes or STDs/STIs. More than six in 10 women worldwide -- over 1.5 billion -- did not get tested for any of them. It's not that women do not see the value in medical regular checkups, 88% worldwide think they improve people's health. For a likely complex set of reasons in 2020, many (40%) had not seen a medical professional in the past 12 months.

Testing rates in 2020 may have been somewhat lower than in other years, with many women forgoing checkups and other non-emergency procedures during the past year because of the pandemic. But women also may be avoiding tests because they lack health insurance, access to medical services, or face other types of barriers. Regardless, if these trends continue, many cancers and other conditions will go undiagnosed and untreated, putting millions more lives unnecessarily at risk.

Future administrations of the Index will shed light on the extent to which COVID-19 affected women's use of health services -- and provide guidance for mitigating such effects in future crises. But even when the world isn't in crisis, the current findings suggest that leaders and policymakers will have a vital role in building awareness of these services and encouraging women to use them.

Find out more about the Hologic Global Women's Index report.