Mindsets can take a long time to change. Have you seen any signs of progress on this front in Africa?

Rheault: Indeed, mindsets reflect how societies evolve over countless generations. So, a change in mindset is always hard, especially on deeply ingrained attitudes, such as gender roles. On the African continent, positive change is everywhere. Virtually all African countries have embraced the Maputo Protocol, which sets the path to improving all facets of women's lives, from the elimination of discrimination to reproductive health to marriage and inheritance.

Several African countries, most notably Rwanda and Namibia, now have more women in national parliaments than many Western nations, including the U.S. Many institutions, from multilateral organizations to foundations to international and local NGOs, work hard to improve the lives of African women every day. We, at Gallup, also contribute to this effort toward positive change by measuring access to credit, land rights, modern slavery and child marriage.

These are all important initiatives that must be pursued to anchor improvements for women's empowerment. But this wave of efforts has yet to permeate the private sphere. What it means is that even if a country passes a law to provide equal rights for women, it may not translate into equality in practice.

For most African women, their day-to-day realities are far removed from exhaustive statutes and eloquent gender-parity declarations. Rather, their realities are shaped by obedience to a male figure, who still has much say on what women can or cannot do. Many Africans attribute this patriarchal system to "culture" to justify the slow pace of change. But culture is a dynamic construct that evolves over time to adapt to new ideas and needs.

Do women in the region feel they are respected and treated with dignity? How do men feel women are treated? What do the Gallup data say?

Rheault: Our data show that in 2018, a median of 64% of Africans feel that women are treated with respect and dignity in their countries, virtually unchanged from 2015, when 67% said the same. While this figure looks relatively high compared with other regions, such as Latin America, it masks large differences across African countries. Attitudes on this issue of respect range from a low of 38% in Comoros and 39% in South Africa to a high of 94% in Rwanda.

Many things drive perceptions of respect. From what Africans witness at home to what they experience outside the home to how the media portray women. All of this helps shape attitudes on this issue of respect of women. And just to come back to Mauritius, women are now in many professions, from C-suite executives to political leaders to bus drivers and construction workers. But Mauritian women are frustrated because they feel men still believe women should stay home.

What about safety and security? That can be a real barrier to progress for women. How safe do women feel?

Rheault: Looking at the Gallup data, we see there was a large drop between 2015 and 2018 in perceptions of respect for women in seven countries. It is concerning to see large decreases on a respect question, which measures a deep value in society. South Africa experienced a 39-point decline between 2015 and 2018 on this issue of respect of women. It is, by far, the sharpest drop, followed by Mauritania, where attitudes on respect of women sank 24 points over the same period. In this context, respect may actually be a proxy for women's safety. And, more specifically, women's safety in the home.

This is a taboo topic that is not discussed easily, not even with close relatives or friends. It is considered a private matter, and for many people, including women, domestic violence is considered normal behavior. If you grow up witnessing your father beating your mother, then if your husband beats you, such behavior falls in line with your observations.

Anecdotally, domestic violence affects all socio-economic groups, not just poor, rural women. Although there are many organizations that raise awareness about this issue, many African women do not know there are laws that protect them against this type of violence. Even when women are aware, they do not believe the authorities would enforce the law.

In South Africa, many activists have worked hard to raise awareness and help countless women share their painful stories. However, it remains difficult for women to break the silence of domestic abuse because of shame and the fear of how others will perceive them.

Do you have any stories or examples from your work in these countries that you can share that illustrate this need for a reset in mindset?

Rheault: Yes, I have many. But here's one from Mali and it builds on this critical issue of violence in the home. A couple of years ago, I was flying back from Bamako to Washington and the airline asked if I could chaperone a minor who was traveling to the U.S. The minor was a Malian girl who must have been 16 years old and was going to visit relatives in Washington. I said yes.

After traveling together for more than 12 hours, we had become "sisters." And when we landed in Washington, I told her I would wait for her after she was done with immigration to deliver her to her relatives. All of a sudden, she expressed great concern for my wellbeing and told me not to wait for her because my husband would beat me if I got home late.

While I reassured her he would not beat me, her comment made me reflect on the plight of women in her country. What had her eyes seen in her own home or what had she personally experienced after returning late from school? Did she think that beatings from their husbands are what all women go through? I had a lot of questions, but it was now time to bring her to her relatives who were waiting in the terminal. We certainly did not want to make them wait any longer.

But how can things improve for women in Africa? What gives you hope?

Rheault: The sheer knowledge, wisdom and strength of African women are too valuable to confine them to traditional roles only. Perhaps, it means showing skeptics how the positive changes from having women live full lives can benefit everyone in the community. Or perhaps, women's empowerment in Africa can be framed as part of the dynamic nature of culture. Instead of fearing the loss of tradition, embracing positive change for women is key for sustainable development across Africa. 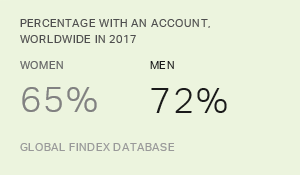 This International Women's Day, 26% of women -- or about 620 million -- rate their lives positively enough to be considered "thriving." The life ratings of the rest -- about 2 billion -- place them in the "struggling" or "suffering" categories.