Rheault: On a continent as vast and diverse as Africa, it is hard to generalize. But the need to change mindsets about the evolving role of women is relevant to all countries. Compared with 20 years ago, more girls are going to school and graduating from university, but people's expectations about what these young women will do with their newly minted degrees have hardly changed. People still view women in a traditional light -- taking care of the house and raising children. There are exceptions, of course, but overall, mindsets have yet to change.

Rheault: Our data show African women want choices. Many want to have the flexibility to work outside the home and take care of their family. Across the countries surveyed in sub-Saharan Africa in 2016 as part of an International Labour Organization-Gallup research project, 48% of African women said they would like to do both, while 34% said they would prefer to work at a paid job and 16% said they would prefer to stay home. But this varies a great deal across countries: 70% of Rwandan women say they would like to do both, while 21% say the same in Sierra Leone.

Change has happened unevenly across the continent. Several countries have made good progress to create a positive climate affording women professional opportunities. The public sector has made the greatest strides, with many more women now serving as ministers and members of Parliament, at least in some countries. In the private sector, progress is more subdued and women face significant hurdles in being recognized as valued professionals. And even when women do enter male-dominated professions, doubt persists regarding their abilities. During job interviews, some employers still ask women whether they plan to become pregnant -- and sometimes employers even make postponing childbearing a job requirement, which essentially forces women to choose between career and family.

What additional questions do you wish Gallup asked women in Africa?

Rheault: We should include a question to help us measure change in public opinion about the evolving role of African women. Asking people if a woman could lead their country or their community as well as a man would provide us with a metric to track change over time and across countries. A scientific measurement could help governments develop effective campaigns to raise awareness among the general population about the benefits of women contributing fully to society. Another important question to add would measure women's sense of self-worth.

While stereotypes frequently project men's traditional lens on women's roles, this mindset is actually fairly pervasive. Women, themselves, often doubt their abilities, which may reflect their psychological conditioning of what they hear and see around them. There is also a generational gap -- older women sometimes try to bring younger women back into the (traditional) fold, emphasizing what is customary and appropriate for young women to do.

In sub-Saharan Africa, nearly as many women in the ILO-Gallup study (20%) cite unfair treatment at work (abuse, harassment, discrimination) as the biggest challenge that working women in their countries face as mention work-family balance (18%). One other important topic for women in the region is sexual abuse -- not only in the workplace, but also in the home. Domestic abuse is a taboo topic and would be hard to measure, but it needs to be addressed as it robs women of their self-worth and well-being.

What are African women's biggest dreams for the future? If they could invent a better world in their home countries, what would it look like?

Rheault: Being guaranteed all of the rights women deserve. This goes beyond the important rights of access to quality education, healthcare and employment. It also includes the right to speak freely, whether in public or at home, the right to choose their spouse and start a family on their own terms, and the right to inherit their husband's property, to name a few. This will require a fair amount of work on the part of governments, private employers, nonprofit organizations and religious leaders to help raise awareness in each country. Using successful women to serve as role models will certainly help. However, it will be even more important to reach out to men so they can support positive change for their mothers, sisters, wives and daughters, starting now and for generations to come.

Find out more about Gallup's World Poll and its survey research in Africa. 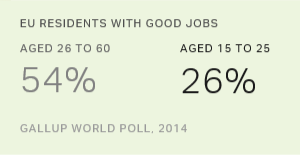