WASHINGTON, D.C. -- The pandemic upended a lot of things in people's lives, but Gallup's latest update on its annual Law and Order Index shows that so far, it hasn't fundamentally altered how safe most of the world feels or shaken people's faith in the rule of law.

The index itself is a composite score based on Gallup World Poll questions that ask people whether they are confident in their local police, feel safe in their neighborhoods, or were victims of theft or assault in the past year. Higher scores mean more people in a country feel secure.

While data from Venezuela and Gabon are not yet available in 2021, the score for Norway in 2021 remains a high 93. Notably, the data in Norway were collected before the nation-shocking bow and arrow attack in October that claimed five people's lives. 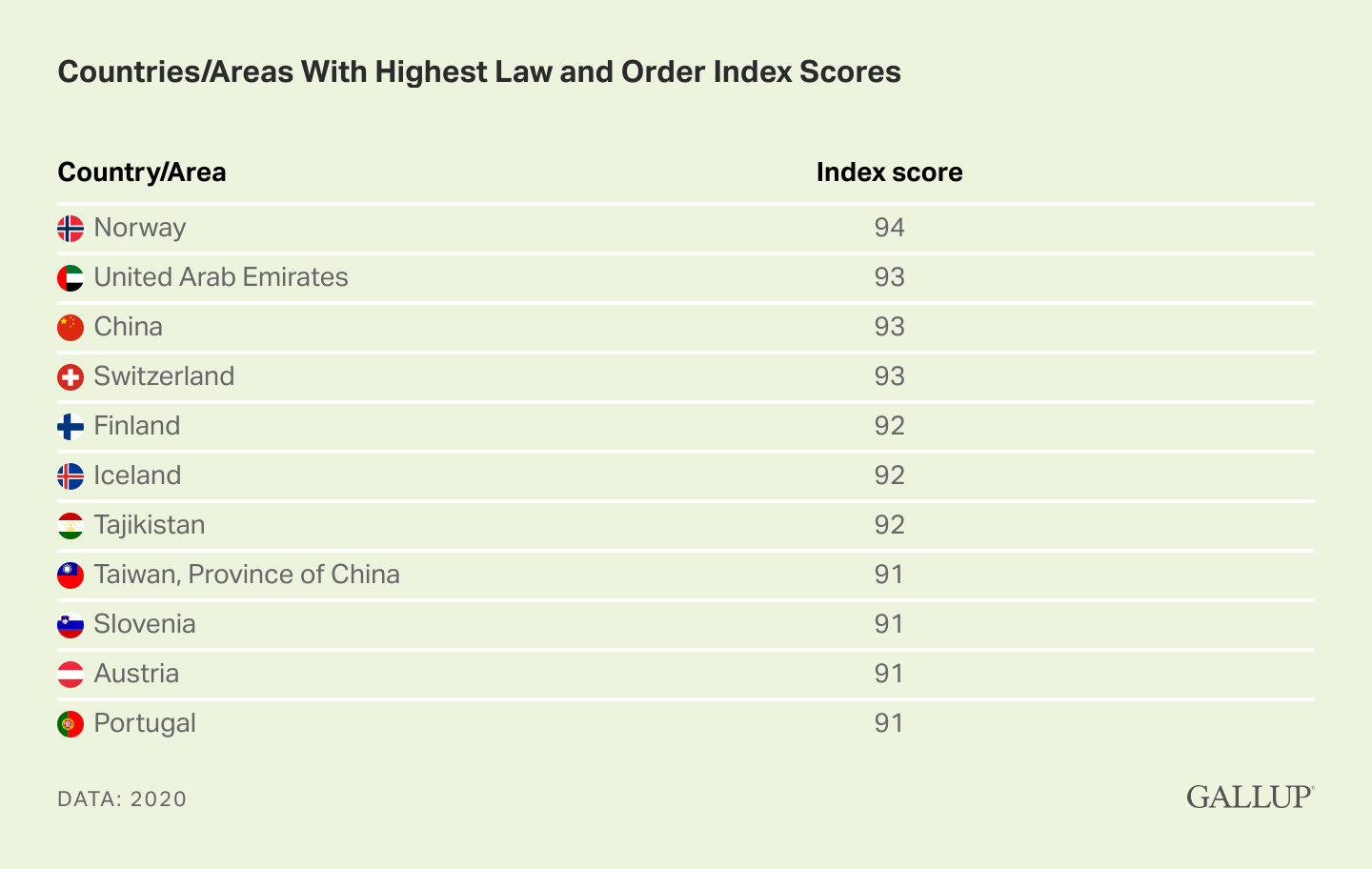 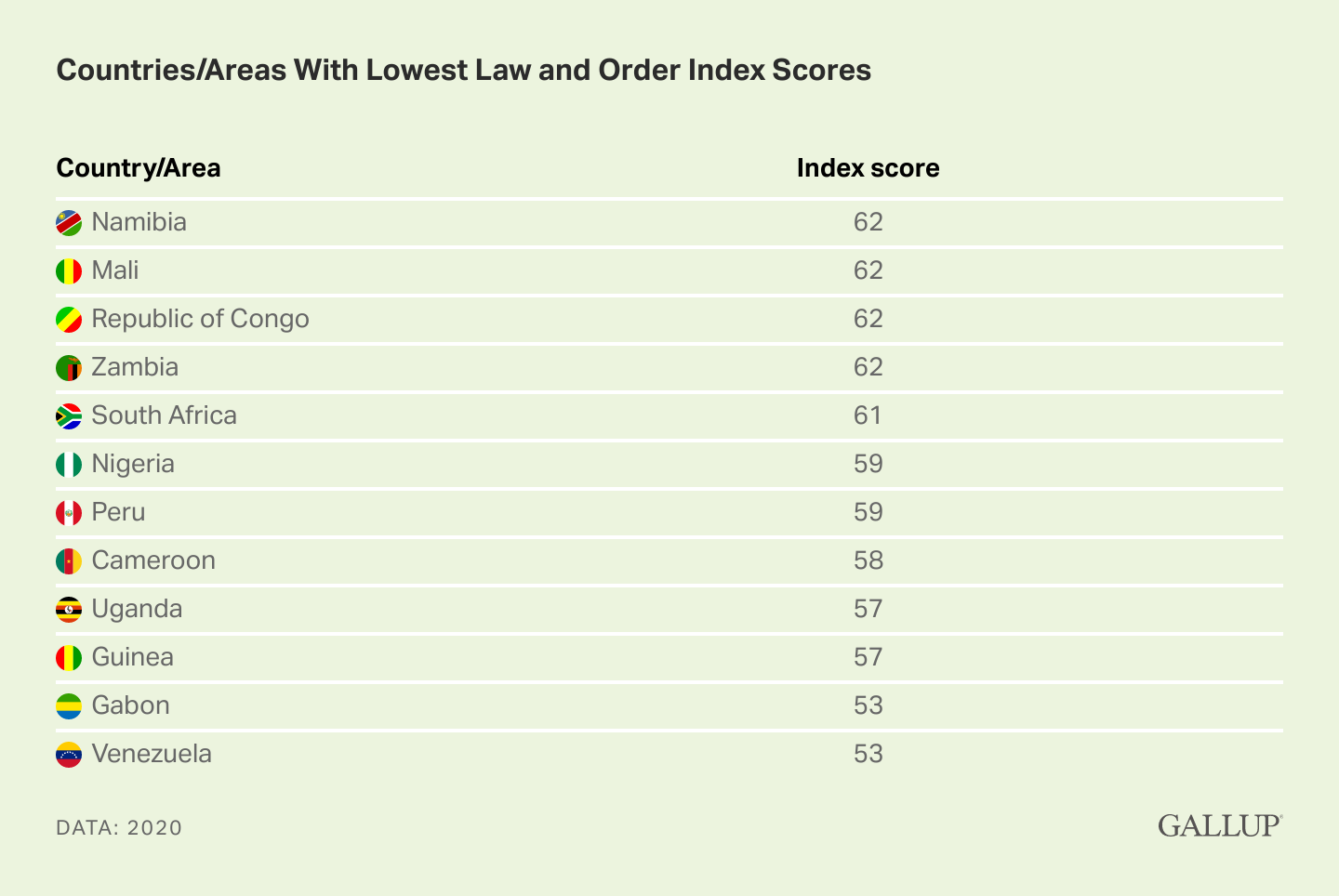 Table. Venezuela and Gabon tied for the lowest scores on the Law and Order Index in 2020, each scoring a 53. Both countries typically score poorly on the index each year.

For complete results for all 115 countries and areas surveyed in 2020, read Gallup's 2021 Global Law and Order report.

Although the U.S. typically does not make the top 10 most secure countries in the world, it did fare better than the global average in 2020, with a Law and Order Index score of 87. The U.S. is in the company of Spain -- which also scored an 87 -- and its neighbor to the north, Canada, which scored an 86.

Most of the World Feels Safe, but Not Everyone Does

About seven in 10 people worldwide in 2020 said they feel safe walking alone at night where they live (72%), which is up slightly from the 69% who said so in 2019. But these overall numbers continue to mask scores that range from as high as 95% in the United Arab Emirates to as low as 31% in Venezuela and Gabon.

The countries in which residents are least likely to say they feel safe walking alone at night are exclusively a mix of countries in Latin America and the Caribbean and sub-Saharan Africa. Six of them also ranked among the least safe in 2019 -- Brazil, the Dominican Republic, Namibia, South Africa, Gabon and Venezuela. 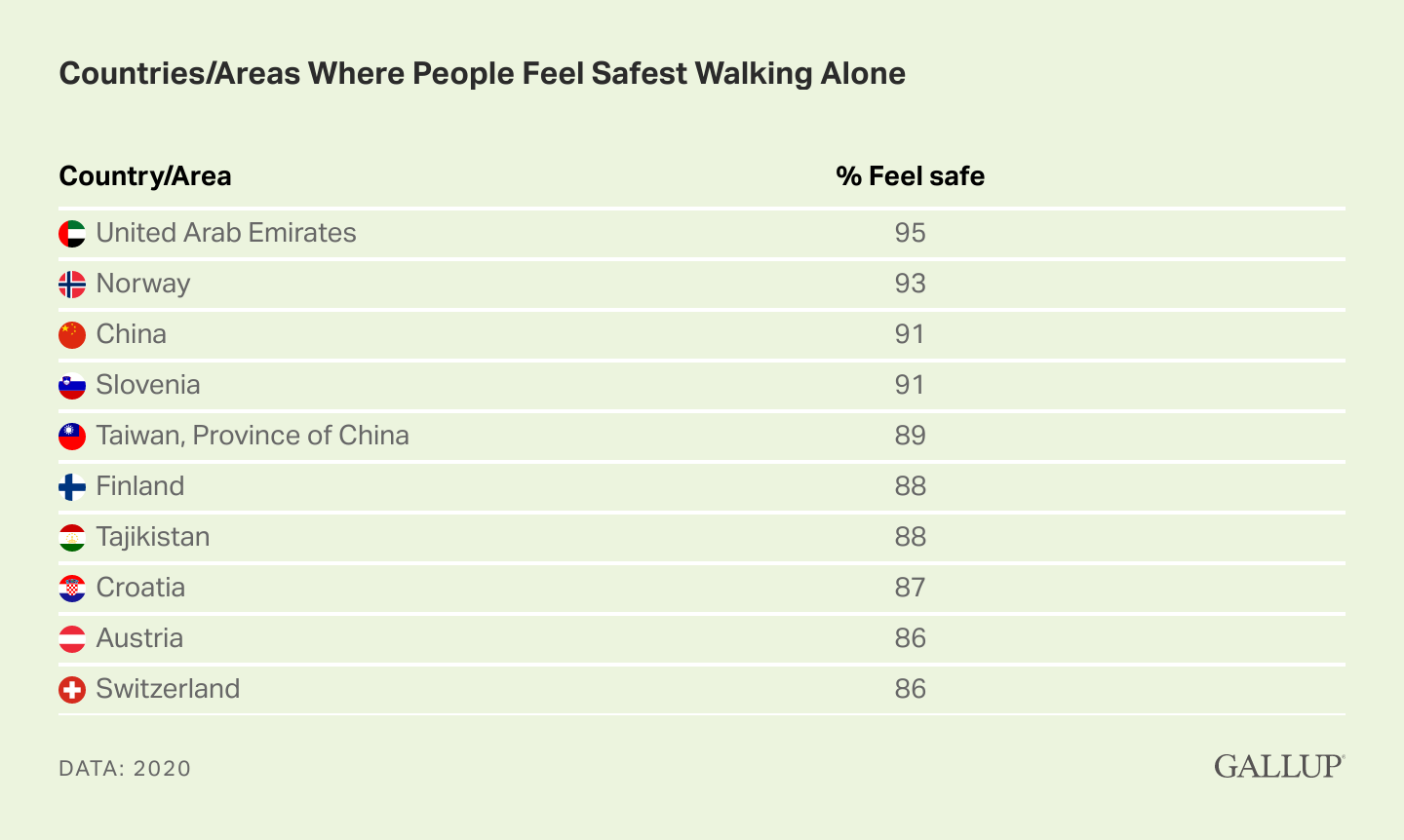 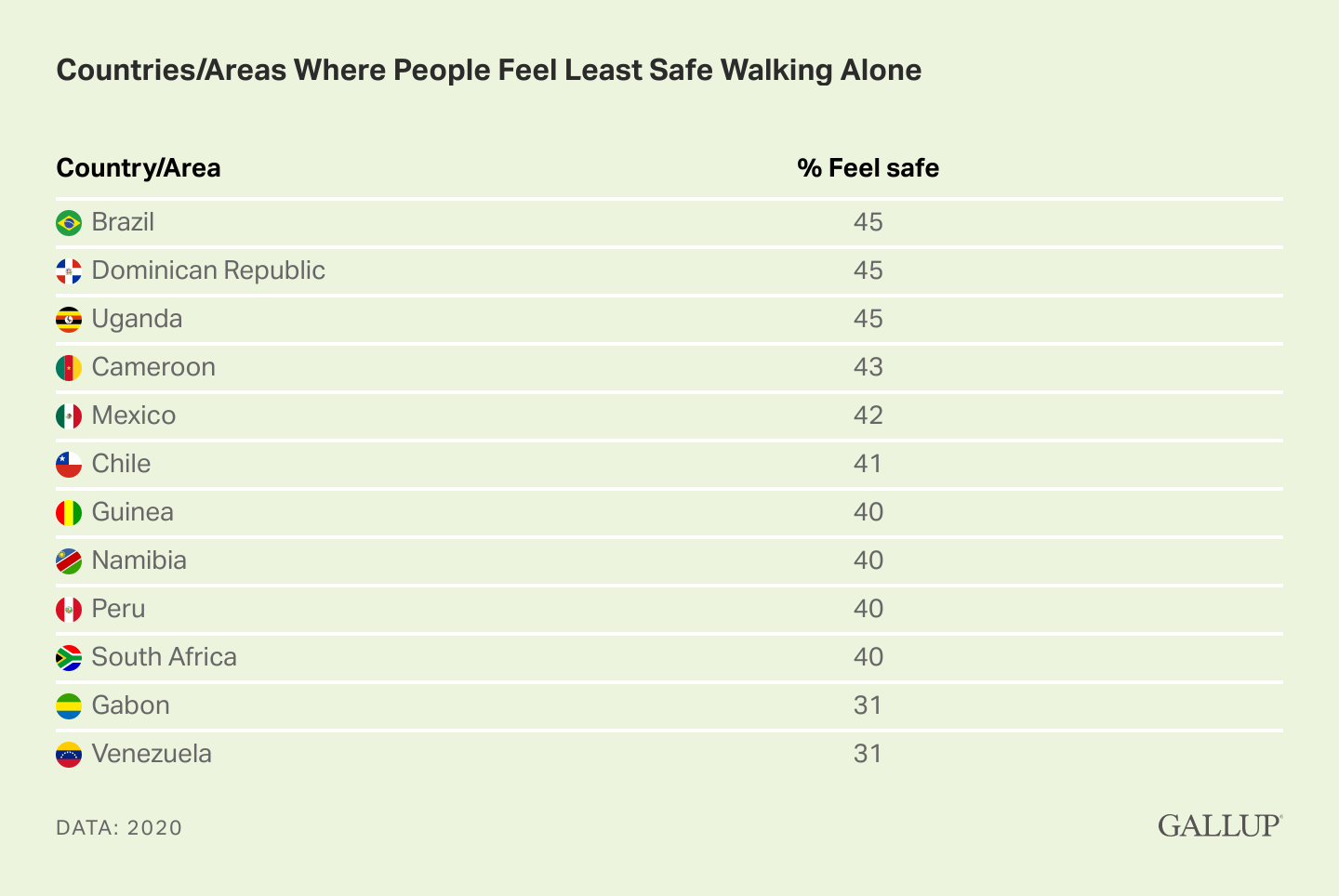 In 2020, the U.S. was slightly above the global average at 78%, when Americans were interviewed during the heart of the pandemic lockdown in March through early May 2020. A year later, in 2021, slightly fewer Americans (73%) said they feel safe walking alone at night. This pattern follows the increases in Americans' fears about crime and safety in 2021.

Confidence in Police Edges Up

More than seven in 10 adults worldwide (71%) in 2020 said they have confidence in their local police, which is also up slightly from 69% in 2019. The results vary significantly by region, however, from a low of 49% in Latin America and the Caribbean to 82% in Western Europe and Northern America.

The relatively low average on this measure in Latin America and the Caribbean is not surprising, given the region's poor performance on all of the Law and Order Index component metrics in 2020 and in previous years. The 49% who were confident in 2020 is unchanged from the previous year, but it is also on the higher end for historical scores in the region.

With rare exceptions, confidence in the police remained stable or improved across most of Latin America and the Caribbean in 2020. Confidence plummeted 10 points in Bolivia, which was rocked by violent protests that virtually brought the country to a standstill. Confidence in police dropped from 45% in 2019 -- which was a record high -- to 35% the next year. In 2021, the situation is no better; 34% in Bolivia are confident in their local police.

The United Nations' most recent progress report on its Sustainable Development Goals for 2030 concludes that, in the second full year of the COVID-19 pandemic, "the world is still a long way from achieving the goal of peaceful, just and inclusive societies." But for the world to keep moving forward, it will need to do so from a foundation of "peace, stability, respect for human rights, effective governance and the rule of law."

Gallup's latest global surveys on people's perceptions of their own security and faith in the rule of law were collected throughout the first full year of the pandemic, and through the first half of the second, providing a sense of where this foundation is stronger and weaker.

The results overall show that not much has changed over the past few years and there is still much room to grow. While the majority of people worldwide who feel safe can take comfort in that, nearly a third -- which translates into hundreds of millions of people worldwide -- do not feel safe walking alone at night where they live.

Results for the 2020 perceptions of law and order are based on nationally representative, probability based samples among the adult populations, aged 15 and older, in 115 countries and areas throughout 2020.

In most countries/areas, surveys were conducted over mobile and landline telephones; some in person interviews were conducted in Republic of the Congo, India, Mali, Pakistan and Senegal.

For more details on the 2020 fieldwork: https://news.gallup.com/opinion/gallup/328745/gallup-learning-polling-world-pandemic.aspx

Results for the 2021 perceptions of law and order are based on nationally representative, probability-based samples among the adult populations, aged 15 and older, in 51 countries and areas surveyed between April and August 2021. Surveys were conducted either through telephone or face-to-face interviews.