WASHINGTON, D.C. -- Residents of Latin America and the Caribbean were the least likely among all global regions last year to feel secure in their communities. In 2013, the region scored a 56 (on a scale from 0 to 100) on Gallup's Law and Order Index, which is based on confidence in local police, feelings of personal safety, and self-reported incidence of theft. Residents of Southeast Asia, East Asia, and the U.S. and Canada were the most likely to feel secure. 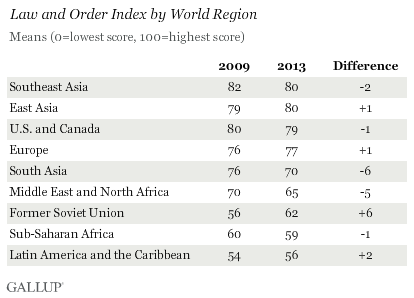 The relatively poor personal security situation in Latin America and the Caribbean has not significantly improved over the past five years. In contrast, Law and Order Index scores have improved among residents of the former Soviet Union, a region that had a similarly low score as Latin America and the Caribbean in 2009. Meanwhile, people's sense of personal security has deteriorated in the Middle East/North Africa region, as well as in South Asia.

Eight out of 10 countries with the highest homicide rates are located in Latin America and the Caribbean, with the region accounting for 36% of the world's homicides in 2012, according to a United Nations report. Furthermore, the Americas have overtaken Africa -- where index scores are only slightly higher -- as the region with the most murders, largely because of a surge in organized crime.

Venezuela's index score of 41 is the worst not only in the region, but also in the world. In 2013, just 19% of Venezuelan adults said they felt safe walking alone at night in the city or area where they live. Furthermore, just 26% of Venezuelans expressed confidence in the local police and 22% reported that money had been stolen from them or another household member in the last 12 months. The ongoing political and economic crisis in Venezuela has contributed to a surging murder rate, according to the U.N. Office on Drugs and Crime. In 2012, Venezuela had the second-highest murder rate in the world after Honduras, at 53.7 per 100,000 inhabitants.

Nicaragua, Panama, and Chile have the highest index scores in the region, and each has seen sizable increases since 2009. The biggest jump was in Ecuador, where all three indicators (number of thefts, perceived security, and confidence in the police) improved considerably. Ecuador's President Rafael Correa attributes his administration's success in fighting crime to improving arms control, increasing the judiciary's independence, and campaigns reinforcing efforts to capture the country's most dangerous criminals.

Developments in Egypt and Syria Drag Down Regional Average

The toll that civil war in Syria and political turmoil in Egypt are taking is evident in the 31-point and 18-point drops in their respective scores on the Law and Order Index since 2009. In 2009, 84% of Syrian adults said they felt safe walking alone at night; by 2013, this figure had dropped to 33%. In Egypt, interviews were conducted shortly before then-President Mohamed Morsi was removed from power. Compared with the situation in 2009 under then-President Hosni Mubarak, reports of theft almost doubled, while perceived safety and confidence in the police tumbled on Morsi's watch.

Given its big population relative to the region, the significant drop in India's Law and Order Index score overshadows improved perceptions of security in Nepal and Pakistan and is responsible for the drop in South Asia's index score. A number of crimes against Indian women have led to street protests and received international attention in recent years. Yet, feelings of safety in India have deteriorated among both men and women since 2009. However, there are significant differences by region, with security concerns particularly prevalent in northern India, where several high-profile incidents of violence against women have occurred.

With security and public services collapsing after the breakup of the Soviet Union, the region had to rebuild a functioning justice system and police force. Since 2009, reported security levels improved in eight out of 13 countries and regions. However, index scores continue to vary widely, from 88 in Uzbekistan and Tajikistan to 53 in Ukraine, meaning that Ukrainians were already among the least likely in the region to feel secure before the Euromaidan protests, the Crimean crisis, and the war in eastern Ukraine started to tear the country apart.

Apart from the human tragedy, citizen insecurity thwarts development in regions with high levels of violence and crime. According to U.N. Development Programme estimates, the excess mortality attributable to homicides cost Latin America 0.5% of GDP in 2009. In Honduras, the country with the highest murder rate worldwide (90.4 per 100,000 inhabitants), violence and crime are estimated to have cost the country 10.5% of GDP in 2010.

The Law and Order Index reinforces these findings, correlating highly with external measures related to economic and social development such as per-capita GDP. In many countries, official statistics on violence and crime are not publicly available, or are not tracked consistently and with enough detail. Moreover, in places where trust in police forces is low, independent data collection appears crucial to producing reliable indicators. Gallup's Law and Order Index attempts to help fill this gap by offering data that are comparable across time, countries, and world regions.

The Law and Order Index incorporates three simple "Yes/No" questions that gauge respondents' sense of personal security and the incidence of crime:

Index scores are calculated at the individual record level. For each individual record, the following procedure applies: The three items are coded so that positive (or favorable) answers are scored a score of "1" and all other answers (including don't know and refused) are assigned a score of "0." If a record has no answer for an item, then that item is not eligible for inclusion in the calculations. An individual record has an index calculated if it has two scores for two out of three items. A record's final index score is the mean of valid items multiplied by 100. The final country-level index score is the mean of all individual records for which an index score was calculated. Country-level weights are applied to this calculation. The regional numbers are population-weighted in order to reflect the population size of each country within a region.